With two recently opened barbecue joints north of Fort Worth, the tiny town of Argyle has turned into a barbecue destination. Bumbershoot Barbecue and 407 BBQ couldn’t be more different. The former is anchored by a vintage-looking food trailer that could’ve been plucked from the streets of Austin. The latter is housed in a bare-bones building on wheels parked next to a liquor store. But it’s their differences that make them the perfect pair.

Exit 76 on I-35W is home to Corral City, a privately-owned town incorporated in 1973 in order to sell liquor. (Every business there has an Argyle address.) Late last year, Bryan McLarty was serving barbecue at one of his many catering gigs, and a man from the investment group that controls Corral City was so impressed with his food that he implored him to open a barbecue joint. McLarty had competed in barbecue competitions and catered for 18 years, but had never done retail. He was hesitant at first, but by October, 407 BBQ was serving classic smoked meats from a food truck along FM 407 in Corral City. 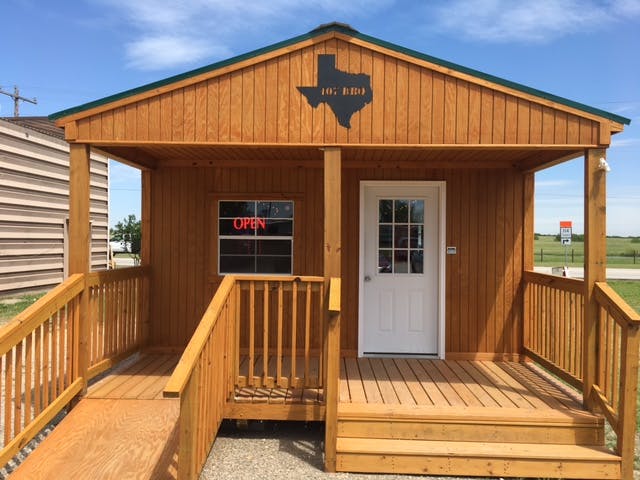 In January, the business moved into its current trailer with unfinished walls and a wood floor. Diners pass by the five picnic tables covered in plastic tablecloths to order at the counter on wheels. The barbecue is cut in the kitchen and passed through a sliding window into the dining room. It’s about as basic of a barbecue joint as you’ll find that doesn’t benefit from some sort of grandfather clause, and that was part of McLarty’s design: start small and grow the venue as the popularity grows. The plan is working, and soon they’ll move across the street to a bigger lot and larger building.

McLarty said his time on the competition circuit doesn’t have much influence on his menu of classic Texas barbecue. “[Competition barbecue] is about how much goop can you put on it and how much goop can you inject in it,” he says. At 407, the flavors are clean and seasonings pretty simple, though McLarty can’t help but serve Head Country sauce, a competition barbecue favorite. I loved the thick but tender pork ribs with a generous dose of black pepper. Smoky slices of turkey breast had an herb-heavy rub, and were plenty juicy. A slab of bologna, heavily scored on the edges, picked up a good bit of that hickory smoke. The generous serving of brisket paired lean slices on the dry side and fatty slices that needed more time to render to some fat. 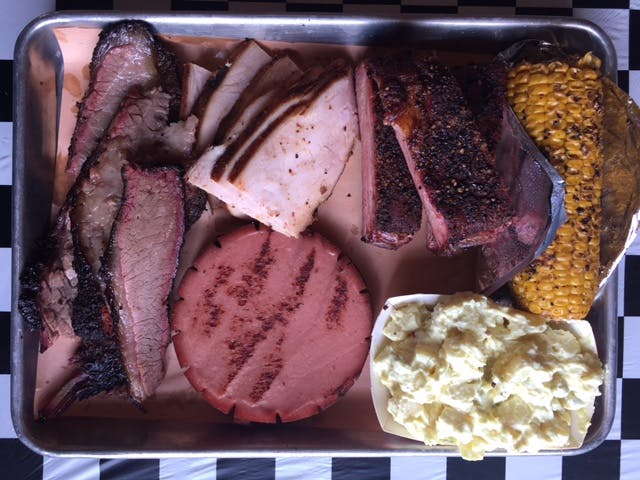 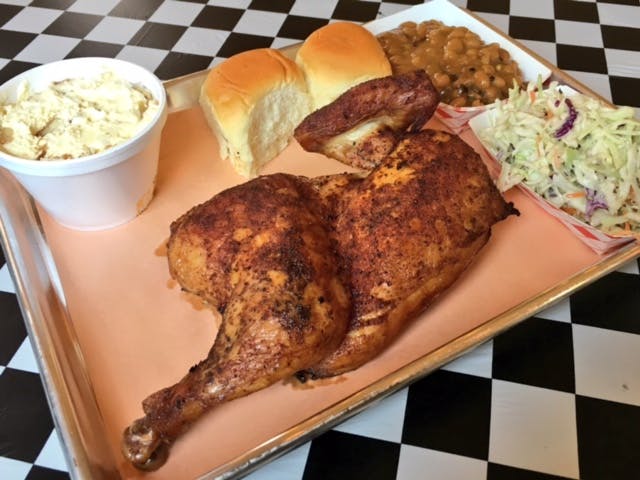 Over two visits, the most impressive meat was the smoked half chicken. The brined bird was incredibly juicy, a little bit spicy, and just the right amount of smoky. As for the sides, the beans are of the sweet, canned variety. Potato salad and slaw are about as basic as they come, but they’re a safer bet than the mushy smoked corn on the cob. The cobs are seasoned with grains of black pepper big enough that you’ll have more than corn stuck in your teeth. 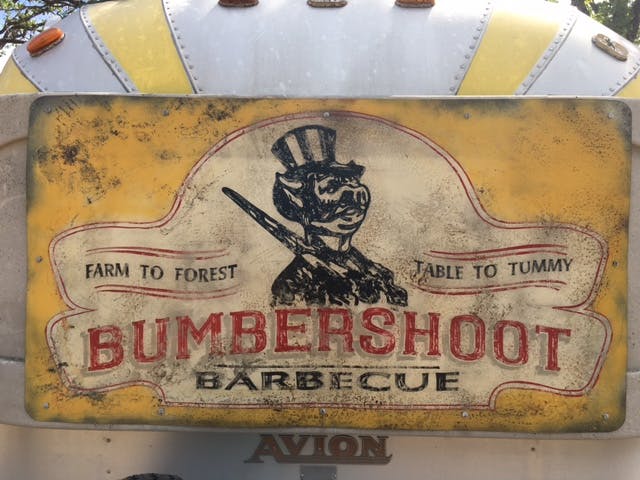 As expected when the kitchen staff includes a chef and a pitmaster, the sides get a lot fancier a couple miles east at Bumbershoot Barbecue. Co-owner Sparky Pearson credits his chef Chad Kelley (who is also the chef at Barley & Board in Denton) with the satisfying pinto beans. Pitmaster Jason Ramey gets the blame for the slaw with apple slices so large it looks more like a fruit salad, and don’t even think about ruining a pulled pork sandwich with the stuff. Those sandwiches were my favorite item. Smoky shredded pork was excellent topped with sauce and thick-cut dill pickles tucked in between two thick slices of grilled bread from Chicago’s Highland Bakery. 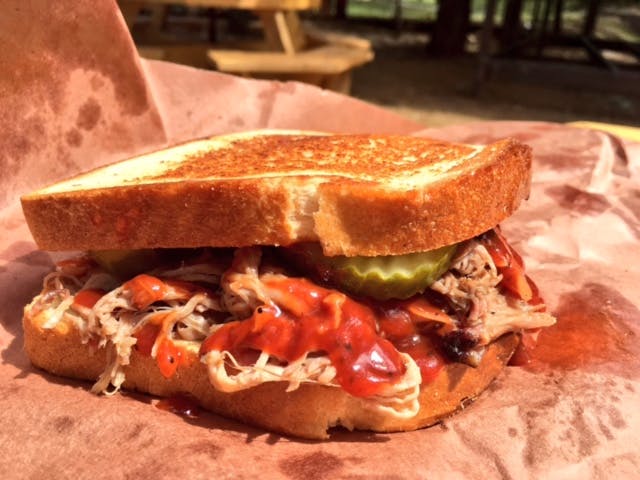 I’ve never seen tater tots get so much attention at a barbecue joint before, but these loaded tots are popular for a reason. For $10, a pile of crispy potato nuggets are loaded onto shredded cheddar, which melts under the heat. On top is chopped brisket (a pre-sauced sloppy joe variety), sour cream, and fresh jalapeño slices (pictured at the top). It tastes as good as it looks.

Minus the properly smoked turkey, I had less success with the barbecue platter. The sliced brisket was dry, the ribs had so much rub it formed its own removable layer, and the brisket sausage was mush surrounded by a casing chewy to require a knife. I forgot it all after another bite of that sandwich. 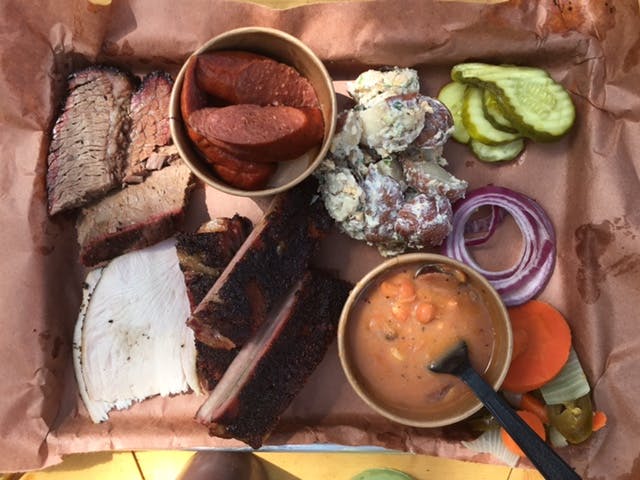 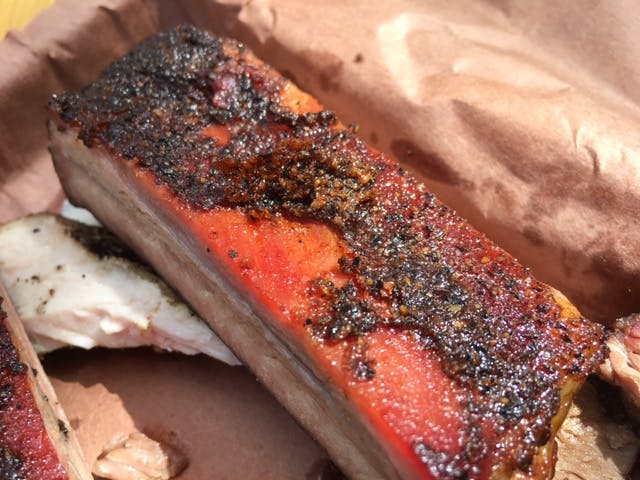 Pearson, who lives in Argyle and owns three other restaurants in town, said Bumbershoot is most popular on evenings and weekends. It’s a comfortable spot, that should remain so in the summer with shade trees and umbrellas over the dozen or so hexagonal picnic tables. The staff will supply paint and brushes to any kids looking to help paint the fence around the lot. It feels like a place I might linger if I lived in Argyle.

Bumbershoot opened in April, a few months after 407 BBQ. McLarty may have been in the neighborhood first, but he’s happy to have the company, sharing pizza together over at the Pearson-owned Earl’s 377 in Argyle. Pearson shared the sentiment about his barbecue brethren on the other side of the interstate. If people have more than one reason to drive up to Argyle, that’s better for both businesses. There’s never anything wrong with a little road trip that leads to barbecue for lunch and dinner.