Only two BBQ joints in Texas have made it into Texas Monthly’s Top 50 BBQ in 1997, 2003, and 2008 without being in the top 5. One is Schoepf’s in Belton and the other is Austin’s in Eagle Lake. I’ve had this one on my wish list for some time, so I was excited to give it a try and see what’s so special. A good sign upon arrival was a haphazard pile of pecan logs taking up several spaces in the parking lot. This is the only wood they use in their very large indirect smokers out in front of the building. 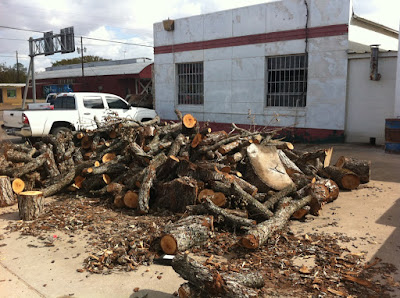 The placement of the smokers right next to the entrance make for an appetizing odor and a solid advertisement for their smoking methods. 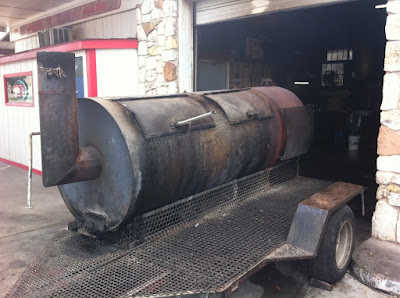 Ordering is done inside along a small walkway that leads to the register. Options are limited, so I went straight for the Texas trinity of brisket, ribs, and sausage. There are signs stating that you must request your sauce on the side if you want it that way, so I did. 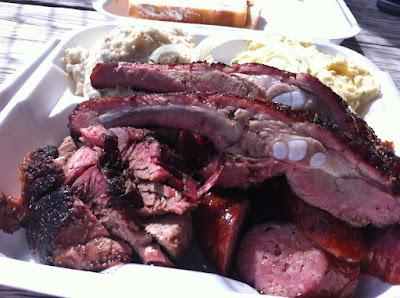 A homemade sausage was a beef and pork mix with heavy black pepper seasoning. The links were good, but could have had more smoke and a better snap to the casing. The grind made for an almost cohesive sausage, but it hadn’t reached commercial sausage consistency. The ribs were incredible. A heavy black pepper rub helped create a beautiful crust. The smoke penetrated deeply into the meat, and the rendered fat within made these ribs perfectly juicy. Brisket had the same heavy rub and well-rendered fat. The smoke was bold on these tender slices, and the fat that remained had excellent flavor. All the standard sides are available, but I went with the duo of potato salads. Both types were mashed pretty heavily. The mayo-based option had a heavier vinegar kick with some good sweetness while the mustard-based one was pale yellow with a milder flavor. Either option would be one of the better potato salads around. With all of these quality meats and sides, it’s no wonder the accolades have been steady and frequent. This is a joint worth seeking out.