When Jason and Jake Dady opened Two Bros. BBQ Market, the barbecue joint on San Antonio’s north side of town was met with critical acclaim (including from Texas Monthly, which named it one of the Top 50 in 2013). Pivoting off of this success, the brothers decided to turn their sights to Southtown, and in 2014, they opened B & D Ice House, a casual place with emphasis on the barbecue (obviously) and beer. (The Dadys partnered with Steve and Jody Newman, who also own The Friendly Spot, an outdoor bar across the street with the best beer list in the city.)

The joint, which gets its name from the bar that inhabited the building for decades (the old sign for it is still there), has undergone a slight remodel, though it clearly tried to maintain some of the easy-going atmosphere evident at its namesake. Some patrons order inside and hang out at the bar, but most choose to get their barbecue through widow outside, and dine at one of a dozen picnic tables.

My latest visit was my third, and I was hoping for some minor improvements over my first two. At my inaugural meal, I had had a smoky and flavorful beef rib that was markedly undercooked, though some good brisket was a redeeming factor. A second visit earlier this year saw some incremental improvements, though the brisket was still just good, not great. While I was impressed during meal #2 by the juicy sausage and Big Red-glazed pork ribs, a chicken thigh I ordered (it’s the only chicken cut they offer) showed its age with dry meat and skin, a shame as the flavor was spot. The juicy and peppery sliced turkey was the better option.

I’ll give credit where it’s due: The Dady team excels at creativity, as exemplified by their monstrous sandwich creations. During my second visit, I ordered the “Bruno,” which has brisket and mac-and-cheese inside the bun, a perfect drunk food, though I enjoyed it with my Mexican Coke, my nonalcoholic beverage of choice as I had to drive back to Dallas later. The sides were solid companions to the proteins, just like at Two Bros, and a warm strawberry cobbler was especially good, if not photogenic.

That second visit showed B & D’s potential, but it had yet to live up to the hype. To that point, almost everything I read about B & D Ice House was liberally doused with unfettered praise. That didn’t match my experience, though. Oddly, this was the exact opposite of Two Bros., where my many visits have always been good, but some feedback I get is less than glowing. I began to think it was me missing something about B & D, so I headed back two weeks ago. 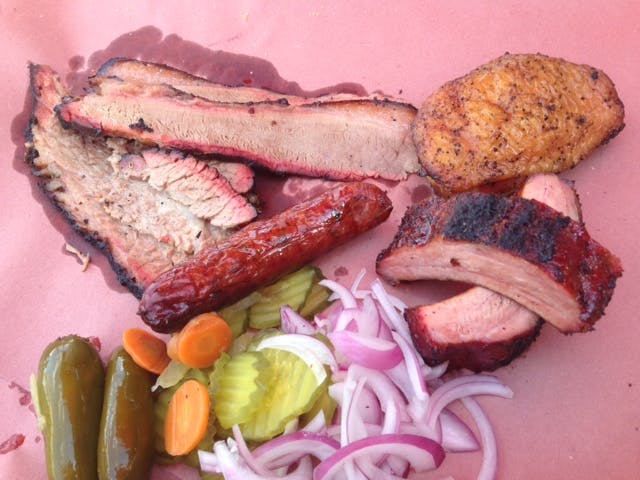 As I ordered, I spotted a tray of briskets pulled fresh off of one of the wood-fired steel smokers whisked into the kitchen. I’m fairly certain this was what I was served, and while fresh-off-the-pit brisket sounds good in theory, it was evident to me what I got hadn’t rested, never a good thing for meat. It was also sliced thin, a way to mask the fact the meat was still a little tough. Those practices coupled together made for some dry beef on the lean side and some chewy fat. The fatty slices were better because they weren’t dry, but to put it simply, the brisket was undercooked. 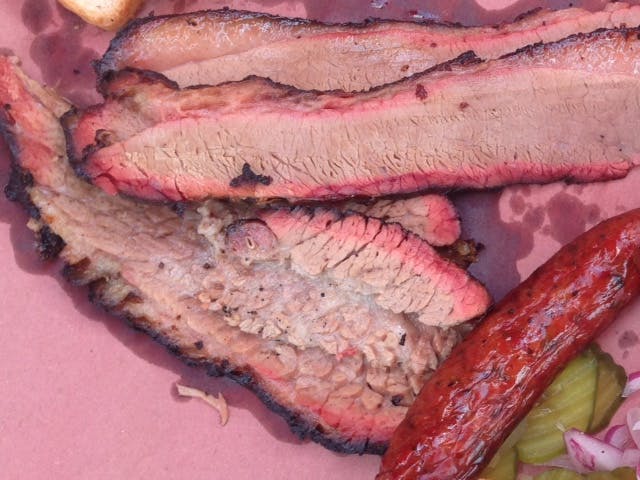 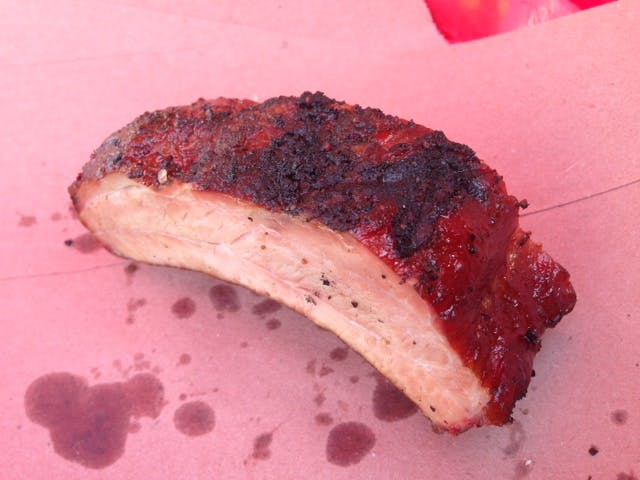 The Big Red-glazed baby backs looked real pretty stacked atop one another, and the ultra-red surface made them appear even more appetizing, and while they had great flavor and good smokiness, the meat was tight. It held onto the bone and ate more like a thick pork chop than a baby back. The chicken thigh was better this time around, the meat a little moister and the skin a little crispier. The sausage needed no improvement, being perfectly smoky and juicy with great snap to the casing.

Taken as a whole, it was another up and down meal at B & D. But even with its flaws, it remains the best option for barbecue in the neighborhood. The vibe and beer list alone will keep me coming back for another try. In the meantime, I hope they can find some consistency with their the smoked meats before my next visit. Fourth time’s a charm, right?