The challenges of running a barbecue food truck weren’t lost on B.R. Anderson when he opened B-Daddy’s BBQ, in San Antonio, in 2012. After all, he was the third owner of the trailer he bought, stepping in after the other two gave up on their ventures. But in restaurants, it’s often innovate or perish. So Anderson made some changes, starting with getting rid of the pellet cooker and the gas smoker. “I don’t cook with gas,” he told me when I met up with him recently. “I don’t even have a propane grill at home.” He also switched up his location (one of the double-edged amenities to have a mobile barbecue business). At first, he tried to make a go of it at the same location on 281, north of the city. Then he started getting itchy and decided to follow the people. It’s proven successful, even if the truck is hard to keep up with unless you track of its movements from the constantly updated Facebook page.

That’s how I found the trailer, which, when I visited it, was set up behind an office building on the northwest side of town. Rather than look for the smoke, you need to follow the whine of the generator. The tell-tale cloud is missing because Anderson smokes everything off-site in an oak-fueled 500 gallon, steel smoker. It’s parked out in front of his future restaurant location in Helotes, where he plans to open a brick-and-mortar location later this year. 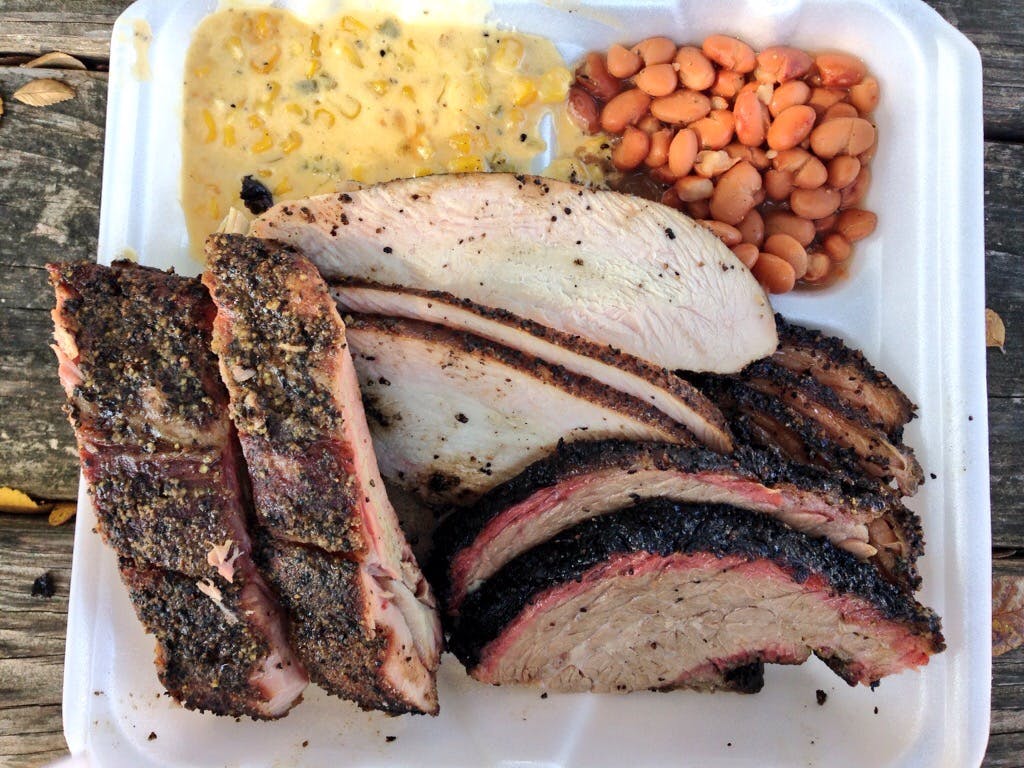 In the meantime, he faces the challenges a mobile operation poses, like how he has to wrap his baby back ribs in foil and store them in a cooler. This gives them exemplary tenderness, but the peppery rub becomes a slurry instead of a bark. Another compromise he makes is to slice his brisket ahead, a method he developed to help ease the lines and serve more quickly. On an average day, he sees 150 orders come through in the hours between 11:00 and 1:00. My wait–behind fifteen people–was just minutes, and my order was ready almost immediately after I’d paid. 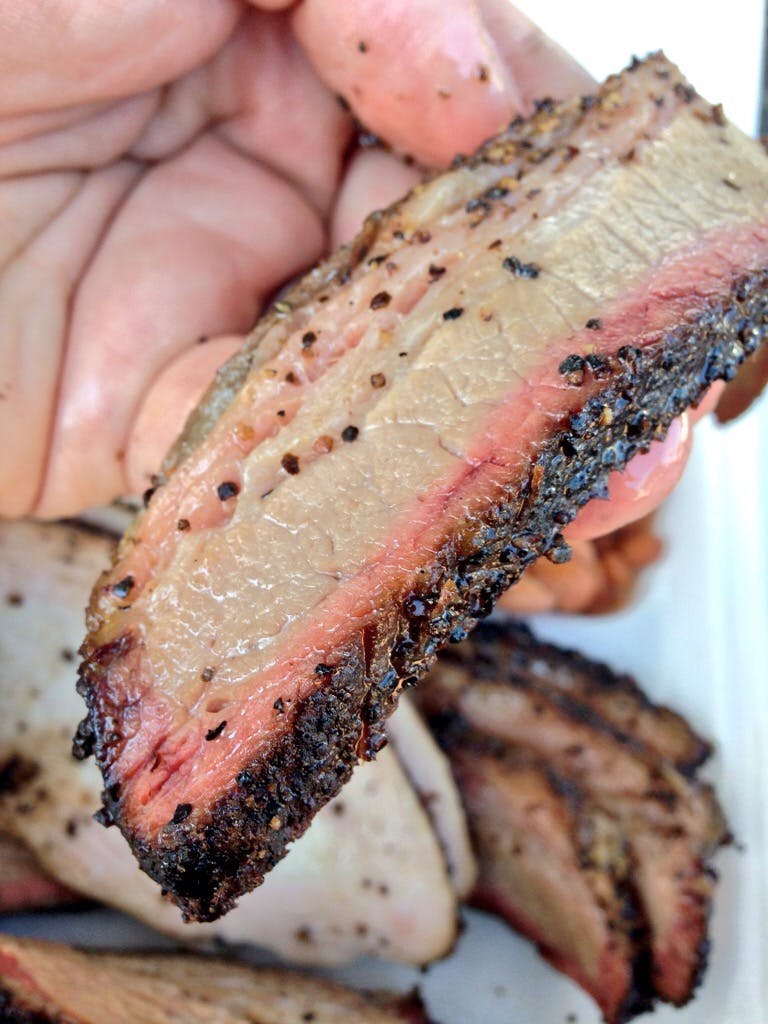 The brisket didn’t suffer. The sheen of rendered fat was present on the surface of each lean slice. The meat was tender, but could have been sliced a bit thinner to accentuate it. Pepper is the dominant rub ingredient, but there’s some good smoke in there too. It’s great brisket worth seeking out. 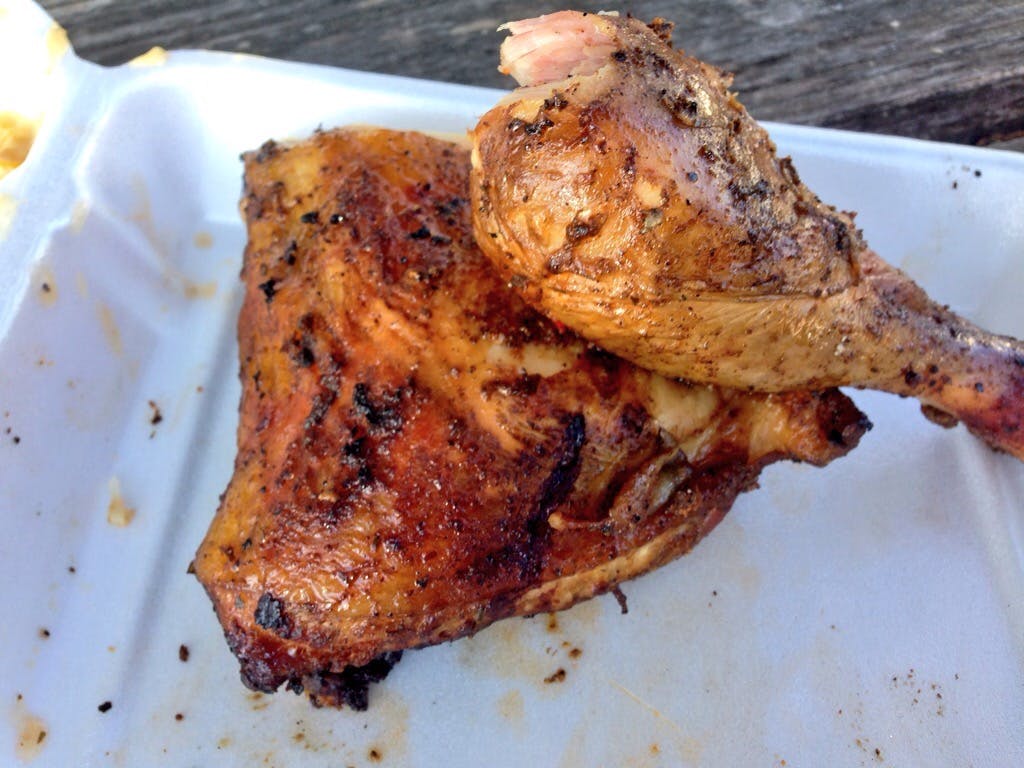 A chicken leg quarter was hefty, but too tough to enjoy. Anderson said he was playing around with different sizes, and I hinted that a smaller one might be a better option for profits and for doneness. Even if the chicken improves, it’ll be hard to beat the other poultry option: thick slices of smoked turkey were some of the best I’ve eaten anywhere. When I told Anderson that, he laughed. “I’d never cooked turkey breast until about six or eight months ago.” He started off brining them, but his son complained of them being to soggy, so he let his son perfect the recipe. With talent like that, it should be B-Daddy & Son before long. 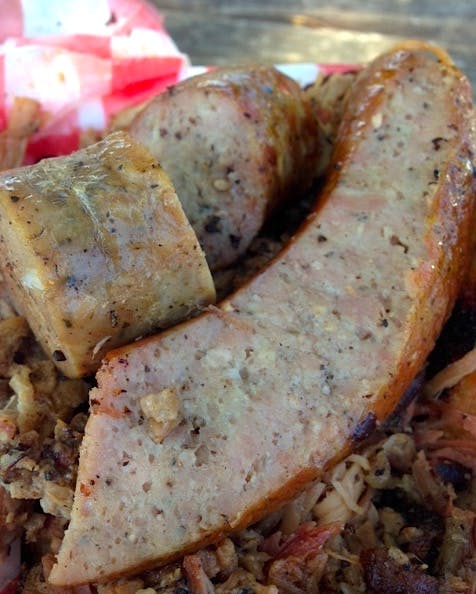 Bolner’s, the historic meat market on the south side of San Antonio, makes his sausage recipe for him. It had good flavor, but lacked smokiness. The sausage topped off my “Big Daddy” sandwich, which also featured chopped brisket and pulled pork. It’s a big sandwich worth it’s $10 price tag, but combinations like this under one bun can be subtraction by addition. The pulled pork got lost in there, so it’s hard to even comment on its quality. Sides of jalapeño cream corn and spicy pinto beans were both good.

Because it’s mobile, B-Daddy’s doesn’t get the same kind of buzz as other new barbecue joints in town. It deserves the attention, and maybe Anderson will get it once the permanent Helotes location opens. He says the truck will remain operational after that time, so if you haven’t chased it down yet, there’ll be plenty of chances in the future.