Two weeks after this review ran, Russell Roegels ended his franchise agreement with Baker’s Ribs and rebranded the business as Roegels Barbecue Co.

Great barbecue at a chain restaurant? I was skeptical to say the least, but in Houston I stopped at the lone Baker’s Ribs location in town. I’d heard it from friends, colleagues, and the store’s owner via Twitter that this was destination worthy barbecue. Having had a number of serviceable meals at the Baker’s Ribs location in Dallas, where the chain was founded in 1988, I didn’t expect to be wowed, but what I found was some of Houston’s best brisket.

Within a restaurant chain, it’s hard to maintain excellence from location to location. For barbecue joints it usually means that the target for quality gets set somewhere in the middle so a cast of store managers with various levels of pit skills can consistently hit the mark. Russell Roegels took over the Houston Baker’s Ribs back in 2001 (see here for more on his backstory). He didn’t join with a deep barbecue knowledge and did a lot of learning on the job. In this past year he decided he wasn’t going to aim for the middle any longer. He wanted to make exceptional barbecue.

Roegels has set his sights on greatness and he’s mostly hitting it. To do this he’s had to veer from company standards in a few areas. A proud Aggie, he developed a trio of sausage recipes with Ruffino Meats in Bryan. The jalapeño version could use more heat, but it’s a fine sausage with good smoke and a snappy casing. An intense bark overlaid the tender strands of juicy pulled pork. There’s plenty of salt and black pepper in there too, which Roegels adds to the Baker’s standard rub of sugar, granulated garlic, and paprika. Ask for extra bark and Roegels will oblige. Chances are he’ll be working at the cutting block. In fact, when I visited on a Tuesday at 2:30 in the afternoon, he was the only employee from a staff of six that was present. His quality control is accomplished by the order instead of via random samples throughout the day.

Even in the mid afternoon, the chicken halves stored in shrink wrap in the warmer were plump and juicy. The skin’s crispiness suffered from such a moist environment, but the meat was smoky and well seasoned. Roegels said most customers preferred the boneless skinless chicken breast, which I found to be a boring sidekick to the half chicken, but then most folks probably don’t want an entire half chicken for lunch. I encouraged him to sell it by the quarter chicken so more folks could be exposed to his great chicken on the bone.

Another poultry option is the sliced turkey breast. With a rub generous in black pepper, it was turkey for grown ups, and it was both smoky and moist. If you’ve been to another Baker’s Ribs, the simple but well made sides will be familiar, as will the sweet pork ribs. Roegels adds more salt and black pepper to the standard Baker’s rub to give them more punch, and it’s an improvement. The texture was phenomenal, but I wished for more of a bark instead of all that rub. 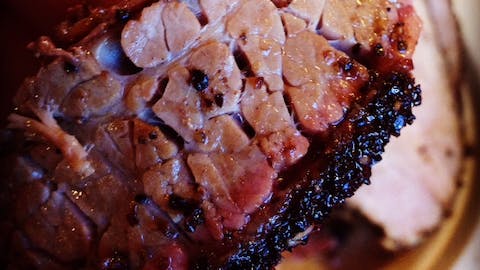 Where Roegels really goes off the reservation is with his brisket that is some of Houston’s best. The norm at Baker’s is to lightly season the briskets and let the smoke add most of the flavoring. In Houston the flavor is closer to a Louie Mueller brisket. Roegels says he uses an 8:1 coarse black pepper to salt ratio, and it comes through in a powerful palate punch. The bark is so crunchy it’s as if the beef was layered with kettle cooked potato chips before slicing. It wasn’t a dry crunch either that might result from old beef. It was more akin to the texture of crisp bacon. I was the only customer in the place when I visited, and as the meat was sliced I could hear the knife sweeping through that stout outer layer. The textural variation in each bite between that bark and the buttery beef from the point was an addictive sensation. I kept eating just to listen to myself chew.

But how much better was this meal than what I could get at the other Baker’s Ribs locations? Just a few miles from my home in Dallas is the newest location on Northwest Highway. They open at 10:00 and I strolled in at 10:30 to order the brisket, ribs, and turkey. A few sloppy slices from a small ball of yesterday’s overcooked fatty brisket came alongside shriveled ribs, also from the day before. The turkey was fine, but was missing the smoke that is so generous in Houston. There wasn’t much consistency between these locations, and Houston is the beneficiary.

I’ve had some good meals, better than the most recent one, at the Baker’s Ribs locations in Dallas, but none of it has been close to the great barbecue that Russell Roegels is putting out in Houston. The rest of the Baker’s chain might want to consider a trip to Houston to see how good their barbecue can be with serious effort and a commitment to quality. But then Russell Roegels has an advantage. He doesn’t punish the early-comers with yesterday’s barbecue.