The history of Central Texas barbecue is shaped by meat markets, and meat markets are open early. Those early hours are still honored by some of the state’s best, so getting a link of smoked beef sausage at City Market in Luling and Smitty’s in Lockhart. Then there’s the Saturday morning breakfast ritual at Snow’s BBQ in Lexington which opens at 8:00am sharp, and Matus Pit Bar-B-Q in nearby Caldwell serves their sausage even earlier, but at these joints the breakfast menu has little variation from the one at lunch.

Austin – Freedmen’s Bar serves a Sunday brunch with Barbecue Benedict and the rest of their barbecue menu. 11:00am – 4:00pm Sun. 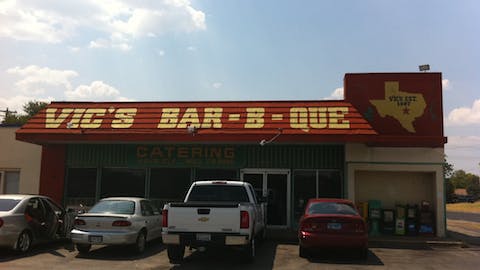 Bastrop – Southside Market has a new location and you can grab some breakfast tacos in the drive-thru. 6:00am – 10:00am Daily

The signs at night are big and bright…at the new Bastrop location of Southside Market.

Elgin – Meyer’s Smokehouse serves tacos and biscuits as well as sausage and brisket by the pound through their drive-thru. 8:00am – 10:00am Daily

We have a drive thru at our restaurant, lots more #brisket and #bbq sausage goes out than breakfast tacos, etc. http://t.co/6Vf7tnRy4f — Meyer’s Sausage (@cuetopia) June 26, 2014

Grapevine – Meat U Anywhere BBQ has a variety of breakfast tacos every day. 6:00am – 11:00am Daily

San Marcos – Hays Co. BBQ began serving breakfast tacos this morning, and will continue to every day. 6:00am – 10:30am Daily

Tyler – Stanley’s Famous Pit Barbecue probably has the widest barbecue breakfast menu in Texas with burritos, sandwiches, and breakfast bowls. 7:00am – 10:00am M-F

Multiple airports – Salt Lick BBQ serves breakfast tacos, sandwiches, and even biscuits with brisket gravy at both DFW and Austin airports. 5:00am – 10:00am Daily

Multiple locations – Rudy’s BBQ serves  a variety of breakfast tacos at most of their locations. 6:00am – 10:00am Daily (may vary by location)

We’d love to add to this list, so let us know in the comments section if we missed your favorite barbecue breakfast.