It was 9:30 in the morning, and the “Open” sign was on at Baker’s Ribs on the Interstate-20 service road in Canton. Two exits east, the devastation from a tornado that hit the area in April was still evident, but Baker’s big pig sign stood tall out front. They weren’t ready to serve the full menu, which is available after 10 in the morning, but the fried pie shop was in full operation.

Baker’s Ribs is a chain with ten locations mainly across East Texas, and inside most of them is an Original Fried Pie Shop. At the recent Big Apple Barbecue festival in New York, Baker’s Ribs—a featured joint—brought the fried pies along too. The lines for the pies were longer than most other lines for barbecue. Figuring that my access to fried pies is greater than the average New Yorker, I waited until I was back in Texas to snag one.

In Canton, there were plenty of popular fruit flavors in the display case. But as you’d expect at a barbecue joint, they also offered a brisket and a pulled pork fried pie. I wanted to have a little fun with the flavor combinations, opting for brisket and blackberry filling. And because I still had stewed apricots on the brain from a recent profile on the Panhandle pitmaster John Snider, apricots and pulled pork sounded about right.

The perplexed pie maker double-checked with me before filling the circle of dough in front of her. (Pro-tip: asking for any special combination of flavors at the The Original Fried Pie Shop ensures you’ll get a fresh, hot pie in just a few minutes.) Still hot from the fryer, blackberry filling oozed from the halved pie. The sweetness of the compote played well against the salty brisket filling, with the crisp crust providing a stout container for the juicy contents. I liked the pork and apricot even better, perhaps because there was a bit less fruit filling, which let the smokiness of the pork come through. Either route means a new way to eat barbecue before lunchtime. Besides, fruit makes it a balanced breakfast, right? 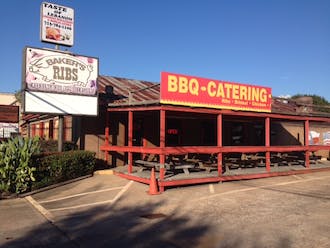