Professional pitmasters order their wood by the cord, but us backyard cooks don’t usually need that much to smoke a brisket. Besides, flavoring your steaks and burgers with a little wood smoke doesn’t even require a log. Chunks of hardwood and even wood chips work better on a grill, and Texas-based W W Wood Inc. packages them all. You’ve likely seen their bags of Western Premium BBQ Products in the grocery store, right above the bags charcoal, but maybe you didn’t realize that the product grew from a one-man operation in South Texas. 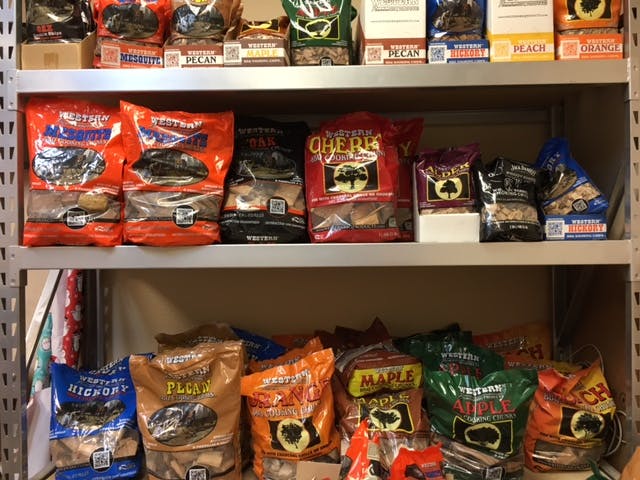 When Jerry Lawson started his business in 1986, he sold hickory and mesquite logs to locals around Pleasanton, just south of San Antonio. The W W Wood business still occupies the same plot of land (it was sold to Duraflame in 2016). During a recent visit, huge piles of apple wood and massive cherry logs sat in the Texas heat awaiting their turn to be processed and dried. It’s a lot more than the mesquite and hickory that Lawson started with. There are quite a few more employees and loads of splitters, saws, and chippers, to turn those trees into barbecue fuel.

Mesquite and hickory are still the most popular woods under the Western Premium BBQ Products, but they carry everything from orange wood to chunks of old Jack Daniels barrels. Texas hardwoods like pecan, post oak, and mesquite come mostly from locals like the man who was unloading a flatbed full of mesquite, which he had harvested off of his land, during my visit. Brand Manager Chadd Green said that 80 to 90 percent of those three hardwoods come from Texas, and most of it from landowners within a hundred mile radius that call on W W Wood when they need trees removed.

Because they ship all over the country, the wood needs to be kiln dried during processing. Green wood that goes into the kiln can remain there for up to six days before it has lost enough moisture. This kills the bugs and other potentially harmful bacteria. That also means the large bags of Western’s barbecue wood are very dry. It requires little effort to light a stack of their oak or pecan logs (my preferred hardwoods for smoking) in my firebox at home.

I get the big bags of Western’s barbecue logs at Academy, but you can also find them at Walmart. The wood chunks and chips are easier to find. I like to add the hickory chunks or mesquite wood chips into a lit stack of charcoal for grilling with some wood smoke flavor.

Western Premium BBQ Products have recently gotten into sponsoring competition barbecue teams, and also host their own competition. I just missed the Turn N Burn Cookoff held in early March. With over $65,000 in prizes, it’s the biggest money for any open competition, meaning anyone can enter, in the country. If you’d like your chance you can sign up for next year’s event, and the folks at W W Wood might even give you a tour of their operation while you’re in Pleasanton.