There’s a scene toward the end of Smokey and the Bandit where a truck driver has just purposely torn the door off of Buford T. Justice’s already roof-less car with the bumper of his big rig. Sheriff Justice goes off on a tirade directed at the disappearing rig that ends with “I’m gonna barbecue your ass in molasses!” It’s one of the great barbecue-related lines in film. While it would be enjoyable to search for other such one-liners, seeing that scene again got me curious about where barbecue actually becomes a character in film.

What was meant to be a celebration feast for Bick (Rock Hudson) and Leslie’s (Elizabeth Taylor) marriage ends abruptly. Beef cuts including brisket are cooked over coals for the meal, but it begins with the unearthing of a wrapped beef head. As they make their way down the buffet table filling their plate, Leslie notices the head being unwrapped. “What is that?” Leslie asks. Bick responds in a matter of fact manner, “A calf’s head.” After explaining the method of cooking “real Mexican barbacoa” Bick notes with anticipation, “boy, them brains is sure sweet.” After a brief look of disgust at his response, she faints immediately after being served a spoonful of beef brains scooped straight from the skull.

The heat and dozens of new people surrounding Leslie had caused visible stress during the scene, but it was the slow-cooked brains that caused her to be overcome. That symbol of traditional Texas food had been as foreign to her Virginia-raised sensibilities as raw oysters would have been to Bick. It was at once barbaric and Texas all at once.

This isn’t a Texas-based film, but Primary Colors used the daughter of a Southern pitmaster to expose the extreme moral flaws in an otherwise likable political candidate. Fat Willie’s BBQ was one of Jack Stanton’s (John Travolta) favorite hangouts. He held political meetings over plates of ribs and talked campaign strategy while wielding a smoked chicken leg. He also took a liking to Fat Willie’s sixteen-year-old daughter who became pregnant shortly after a visit from Stanton. A faked blood test for paternity put some severe doubt into Stanton’s claim of innocence, but Fat Willy remained loyal long enough foe Stanton to reach the white house – a whole new reason to respect the pitmaster.

A more recent Hollywood production featured barbecue of the East Texas variety. Daddy Sam’s Bar-B-Q and Catfish is the very real Carthage barbecue joint in Bernie, but only the exterior is used on film. It serves as the setting for one of the characters who provides some colorful narrative about the state. For anyone who has visited Zimmerhanzel’s in Smithville, you might recognize those orange chairs and deer heads on the wall at “Sam’s” for the interior shots. It’s the barbecue from Zimmerhanzel’s that gets the meat close-ups too.

I wrote last month about Of Blood and Brine, a film about a Texas barbecue family feud produced by students at the Art Institute of Dallas. It is barbecue that binds the plot instead of simply playing a bit part. A feud erupts between father and son over the use of barbecue sauce. What could be more Texan? The film won’t be completed until next year, but the script features barbecue in every scene of its 23-minute run time. The film opens in a barbecue joint, and the credits roll just after the conclusion of a barbecue contest. They even use Back Country BBQ in Dallas as one of the joints in the film.

A few more Texas barbecue joints have gotten some screen time as well. Though it wasn’t identified as such, Louie Mueller Barbecue in Taylor served as the set for a barbecue dinner scene in the movie The Rookie. While the giant beef ribs are the star at Louie Mueller, they didn’t make it onto the big screen or this one.

The Cele Store just east of Pflugerville was cast as a quiet rural bar in Secondhand Lions. It was here that Hub (Robert Duvall) liked to dine at the bar on barbecue. He also showed a few punks what old man strong was all about when they were looking for a fight here. Plenty of punks filled the Emporium during the filming of Dazed & Confused in Austin. That bar has now been converted into Stiles Switch BBQ & Brew, a change for the better.

If it’s a documentary you’re after, then Barbecue, A Texas Love Story is comprehensive with scenes from all over the state. Another documentary out next year called Chef was filming in Austin last month. With businesses highlighted around the country, it looks like Franklin Barbecue will be the only Texas BBQ joint to star in that one. The world of competition barbecue is the focus of American Smoke which just went on sale today. My copy is in the mail.

Not to be forgotten is the dark side of barbecue. There are a whole host of gory films relating to cooking flesh over wood, but those will have to wait until another column later this month. 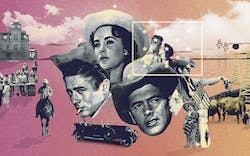 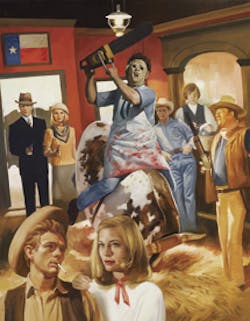