Before there was Texas, one form of Texas barbecue was cemented in the culture of the Rio Grande Valley. How so? The answers lies in a hole in the ground. We’re talking about barbacoa de cabeza en pozo—beef heads cooked with wood coals in subterranean pits.

Beef barbacoa can be found on menus in nearly every corner of Texas if you find the right taqueria. (Most of it isn’t traditional barbacoa, as it probably didn’t come from a whole beef head, and it almost certainly wasn’t cooked in the ground if you find it for sale in Texas.) Finding the good stuff takes some effort. It might be scarce, but wood-cooked barbacoa—sometimes called tatema—is just as important to Texas barbecue culture as any other form of slow-cooked meat, and it has a history that goes back a lot further than smoked brisket.

After Texas Monthly‘s list of the best barbecue joints in Texas came out in 2013, some questioned the absence of Vera’s Backyard Bar-B-Que in Brownsville. It’s the only restaurant left in Texas that still cooks whole heads in the ground with wood coals, and it is also a personal favorite of mine. Our food editor, Patricia Sharpe, explained that “barbacoa is its own category,” and a rebuttal was posted almost immediately on dallasfood.org (the writer of which is a friend of mine). He wrote, “Texas Monthly has built a rhetorical border fence around ‘Texas barbecue’,” and he had a point, as I learned after he lent me a copy of a dissertation by Mario Montaño entitled The History of Mexican Folk Foodways of South Texas. (Much of the background information in this article comes directly from that dissertation.)

Texas barbacoa as we know it today has its roots in Mexico, but not until post-Spanish colonization, when they brought cattle, sheep, goats, and pigs to the area. As Montaño explains, “The ancient Mexicans had no cattle, sheep, or goats and relied in wild game and several domesticated animals—turkey, quails, pigeons, and hairless, mute dogs—to provide them with meat.” A common way of cooking these meats was rescaldo, or cooking directly in the hot ashes. A popular form of rescaldo was (and still is) mixiote, which is seasoned meat wrapped in the thin epidermis of the maguey leaves (but more often in parchment paper today) before being placed in the fire.

This type of cooking pre-dated barbacoa, and certainly pre-dated Texas. The first mention of “barbacoa” was in Gonzolo Fernandez de Oviedo’s book De La Natural Historia de la Indias from 1526 where he chronicled his trip to Hispaniola (present-day Haiti and Dominican Republic). It wasn’t until the end of the Mexican-American War in 1848 that the barbacoa-rich area in the Rio Grande Valley became part of Texas. We sort of fell into a good thing with one giant shift of our southern border. The United States gained a good deal of land, and Texas added barbacoa to its cultural menu. Barbacoa of many types, be it goat, mutton, or beef was already popular in northern Mexico. Meat from the pig’s head was reserved for stuffing tamales, but cattle, sheep, and goat heads were used for barbacoa de cabeza. It was beef-head barbacoa that became the barbecue dish of choice in the Rio Grande Valley.

Much like the open-pit barbecue methods in Central and East Texas, barbacoa wasn’t an everyday dish in the early days of Texas. As Montaño explains, “Barbacoa serves…to convey the message of a special food event, associated with a very special occasion.” While the meat markets of Central Texas began to commercialize their barbecue methods shortly after the Civil War, it took longer for barbacoa’s to makes it to the restaurant counter–and usually it wasn’t a restaurant at all. Even today, you’re more likely to find barbacoa de cabeza at a meat market or tortilla factory.

In Eagle Pass, Texas, just across the border from Piedras Negras, Mexico, Don Juan and Dona Queta Rodriguez started selling barbacoa in the early thirties. In 1937 they opened Rodriguez Grocery & Meat Market. They were joined by Don Celso Rodriguez who sold his goat head barbacoa (called cabezita) and Herrera’s Grocery in Eagle Pass owned by Don Arturo and Dona Noemi Herrera. Further down the river in Laredo, Don Salome Gomez gained fame as a cook and vendor of barbacoa de cabeza. In 1944 Don Perfecto Mancha and Dona Rosita Mancha opened Mancha Meat Market & Grocery in Eagle Pass. Their barbacoa de cabeza preparation was the subject of the 2001 documentary Smokestack Lightning, which followed along for one day of their six-day barbacoa preparation. Sadly, all of the sources for barbacoa listed above have been closed for years.

Throughout South Texas the signs for barbacoa usually denote Sabados y Domingos (Saturdays and Sundays), an indication that dish remains a weekend item. Cleaning and preparing beef heads is arduous work, which is why you aren’t likely to find it on a daily menu. Commercial barbacoa is usually made from steamed beef cheeks, maybe with some beef tongue mixed in. And that “barbacoa” you get at Chipotle is just beef shoulder. For real barbacoa de cabeza cooked with wood in the ground (that you don’t make yourself), you only have one option–Vera’s Backyard Bar-B-Que, in Brownsville. 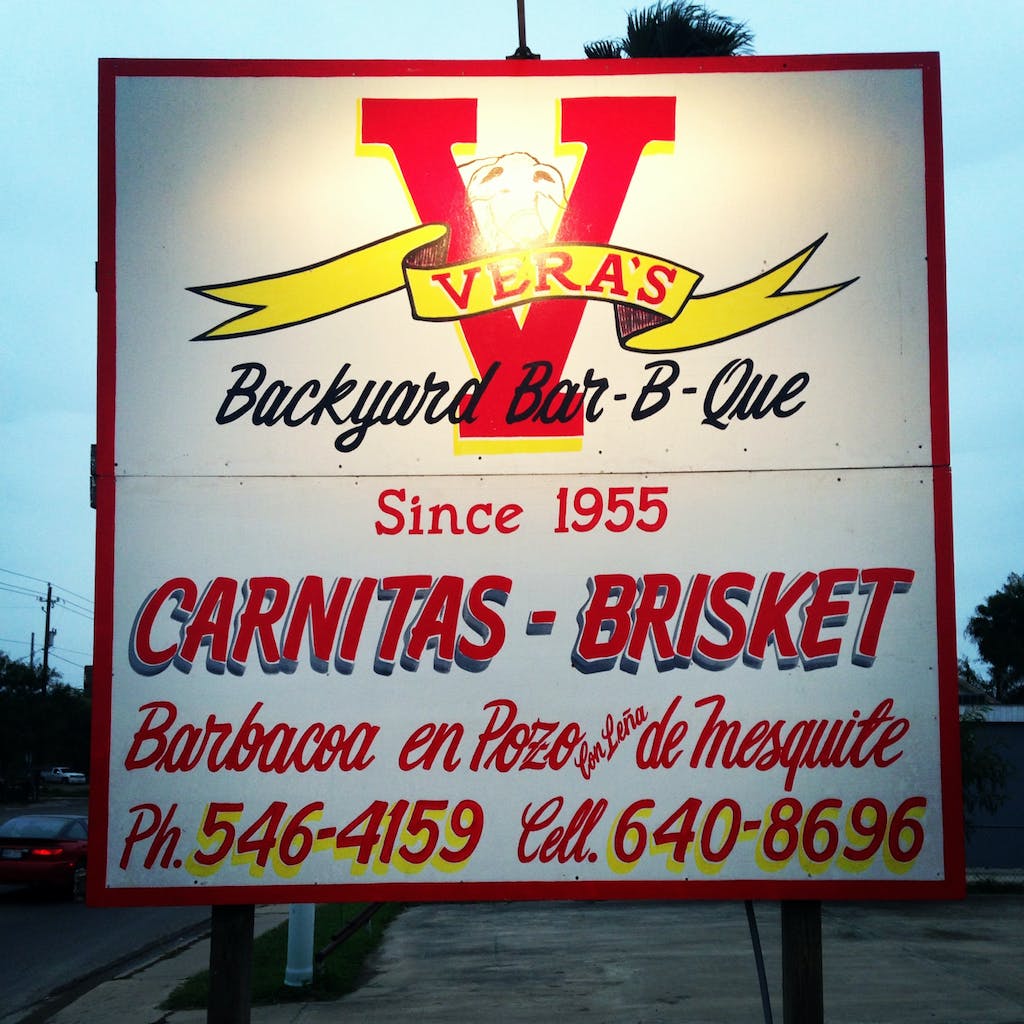 I first visited Vera’s in 2012. Thankfully it was a Saturday, so I could go right back the next day for breakfast. Vera’s opens so early that you might be able to catch them at the end of your night out. Officially, it opens at 5:00 a.m. on Saturdays and Sundays only, but Armando “Mando” Vera will probably serve you at little earlier because he’ll be around. By noon, you’ll be lucky if there’s any barbacoa left. There are a few tables inside, but most customers get theirs to-go along with some fresh tortillas from Capistran Tortilla Factory down the street. I go for the cachete or cheek meat, but there’s plenty more options on the menu (including some incredible carnitas). Since he cooks the whole heads, you can get each individual item. Tongue, lips, and even eyes have an a la carte price. The cheapest option is everything that’s left and chopped together into mixta.

Shopping for beef heads to cook at home will be tough at a big name grocery store, but most meat markets and Hispanic grocery stores offer it, especially if you call ahead. As for restaurant ordering, there isn’t even an IMPS number for whole heads. In past columns we’ve discussed the IMPS 100 series (beef) and the 400 series (pork), but for items from the cabeza, you need to look at the 700 series entitled Variety Meats and Edible By-Products. There you’ll find beef tongue (IMPS 716 or 717, depending on the trim) and cheek meat (IMPS 723). You should also note that there are two parts of the tongue, the tip and the root. The even slices of tongue you may have seen at the deli or on that fancy charcuterie plate are from the tip.

Back at Vera’s, Mando cooks with mesquite wood. It burns down in a subterranean pit to form a bed of coals. Beef heads are unseasoned and wrapped in aluminum foil (agave leaves are the common and traditional wrapping for folks cooking barbacoa at home) before being placed on the coals, then the whole thing is covered with a heavy lid to cook overnight. (If you read about grandfather clauses in last week’s column, Vera’s is an example of a restaurant with an actual grandfather clause that allows them to cook in a brick-lined, underground pit.) In Montaño’s description of the barbacoa preparation at Mancha’s, he noted that the heads were seasoned with garlic and salt, but most barbacoa you’ll get is in need of a salt shaker.

The rest of the seasoning is up to you. Cilantro, raw onion, salsa roja, salsa verde, and little cups of chile piquins can be purchased at Vera’s. Most of the barbacoa I’ve eaten is wet with fat, but the cachete at Vera’s is drier. It has a cleaner flavor, or slightly smoky pot roast, except its the best pot roast you’ve ever eaten. It’s also Texas barbecue through and through.

Mixta – A mix of all the head meat

Ojos – Eyes, which are a delicacy

Palatar – Palate, or the roof of the mouth

Sesos – Brains, which are not often found since whole beef heads no longer include the brain

Barbacoa de Cabeza – Barbacoa made with whole beef heads instead of just cheek and tongue.

Cabezita – The head of a goat cooked as barbacoa.

Descarnando – The act of removing meat from a carcass or skull for barbacoa.

Tatema – An Aztec word used to describe specifically barbacoa cooked in the ground with wood coals. You won’t find the word used often these days, but it signifies that your barbacoa isn’t steamed.

These are a few places where I’ve found great barbacoa in Texas:

Leave a comment below if I missed your favorite place to get a barbacoa fix, or anywhere else that you can find barbacoa de cabeza in Texas.