Meat terminology is a strange thing. Think about it. Knuckle, clod, and even brisket are odd names for beef cuts. But none sound quite as funny as the gooseneck. It doesn’t come from the neck (it frankly doesn’t even sound like it comes from a steer), and no, it isn’t shaped like the neck of a fowl, either. The gooseneck comes from the round (another awkward name), or the rear of the steer. This tough cut is from the hip of the animal, and it is very lean. I would have never thought about throwing it on the smoker until I ate a slice of smoked gooseneck at the Certified Angus Beef headquarters.

Technically, CAB’s chef, Michael Ollier, had smoked a bottom round flat (IMPS 171B), which is the largest portion of the gooseneck (IMPS 170) that remains after the heel and the eye of round are removed. The shape is similar to a brisket, and it has a consistent grain from end to end, making it easy to slice. The thick portion of the back end is usually removed and sold as rump roast. That’s what Jessie Mendoza, the lead butcher at Rudolph’s Market in Dallas, wanted to sell me. After I explained that I wanted the whole muscle, he fetched a full hindquarter of beef and went to work with his knife. It was amazing to witness.

The finished cut weighed in at fifteen pounds before I removed the “rat tail” from the thin end. There wasn’t much of a fat cap, or really much of anything else to trim, so I seasoned it liberally with salt and pepper, and smoked it based (almost) on instructions from Ollier. He had smoked his at 225 degrees until it reached an internal temperature of 165, then wrapped it in foil until it climbed to 193. His [below] was great. Mine wasn’t.

When I tried it at home, I wrapped it up at 165, just like Ollier, but I did it in butcher paper. Unlike foil, the butcher paper can breath. That’s one reason it has become so popular for wrapping briskets in Texas. For such a lean cut, I should have used the non-breathable foil as a barrier to hold all the moisture in. I also moved it to a 200 degree oven instead of leaving it on the smoker. I was still a half-day from serving it (I smoked it overnight), so I thought the lower the better. Wrong. That just gave me more time to lose moisture. The house smelled great when I took it out of the oven at 200 degrees internal several hours later, and I put it into a cooler to hold. I knew I was in for a problem when I opened it up three hours later and almost no fat or moisture had pooled at the bottom of the vessel. 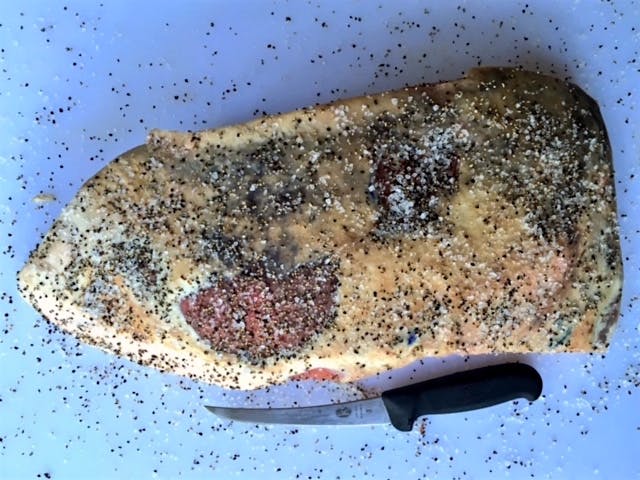 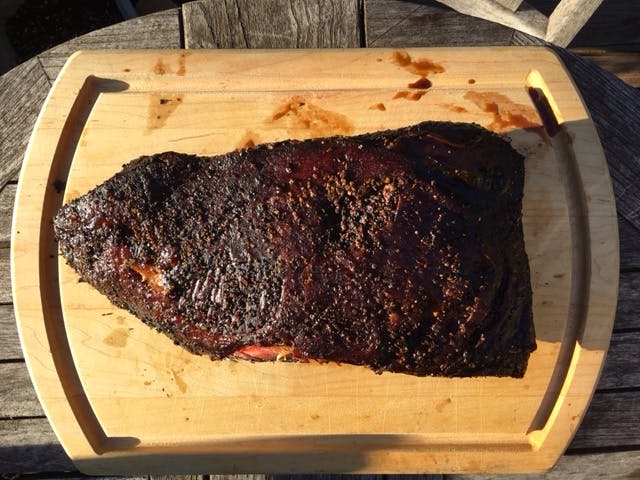 I served it anyway. My friends knew it was an experiment, so nobody minded when I drenched the bone-dry meat in barbecue sauce. It made for a good chopped beef sandwich, but nothing more.

But I’m not the first to learn this lesson the hard way. When I asked around about smoking gooseneck, Earnest Griffith Sr. of Back Country Bar-B-Q, in Dallas, told me, “They accidentally sent me a box, and they said it was round. There was no fat; not even a vein of fat. I thought it tasted good when I made it as a pot roast, but in the pit that was a terrible piece of meat.” Without the fat and collagen of a brisket, there’s not much to break down and keep things moist during the cooking process, so you can’t treat it like a brisket.

Tim Mikeska of the Mikeska barbecue family said they used to cook goosenecks regularly when they were catering:

My dad perfected a process 70 years ago. He used a non-nitrite brining method that consisted mainly of spice-enhanced liquid, [soaking the cut] for 72 hours. That was followed by a re-rub of spices that included half-cracked black pepper. It was a very slow smoking method. Then after coming out of the smoker he reemerged it back into that brine and then we cryovaced it with the liquids. We then sliced it paper-thin on a slicing machine. It was one of our most popular cocktail catered entrées and it was called peppered beef round. It retained it’s dark color and had no presence of any taste of pastrami or pinkness. We served it with some of the brine back on top of the meat along with all the visible black pepper. It was amazing.

I wondered where the funny name came from, so I asked Steve Olson. He helped write the IMPS guide to beef cuts, but he could only repeat a legend similar to one I’d heard before:

I was told many years ago that it is a term that was derived from the days when all rounds were ‘table boned’ [instead of hung on a hook]. When you view a NAMP 158 round and see on the shank the where the gambrel cord (achilles tendon) was hung by a rail hook, it could be considered to look like the eye on a goose head and the neck would consist of the heel, eye, and flat portion of the outside round.

Stephen Joseph at Riverport Bar-B-Que in Jefferson, Texas, had better luck cooking goosenecks than I did. When he first opened in 1993 he would alternate between brisket and gooseneck depending on the current price. “For catering jobs, if they just wanted the lean portion, I’d cook the gooseneck,” he told me. His customers back then were only looking for beef that was either chopped or lean, so the denser gooseneck worked. He’d smoke it a little hotter, at 275 instead of 225, and he would pull it off at 185 degrees instead of 200. Nowadays he sticks to brisket in the restaurant.

Jefferson is in East Texas, far closer to Arkansas and Louisiana than Taylor or Lockhart. Maybe gooseneck was just an eastern import that didn’t make it too far into Texas. The only two restaurants I could still find who cook gooseneck daily are in Louisiana and Arkansas. Joe Cobb’s Bar-B-Q in Bossier City, Louisiana, has been cooking gooseneck since they opened in 1952. “We still use it, mainly for sandwiches,” Kathy Grace told me over the phone. I’ve never eaten there, but Grace, who started there 26 years ago, said they’ve smoked it in an Oyler rotisserie for as long as she’s worked there. They season it with garlic powder, onion powder, and black pepper (no salt), and smoke it with red oak for eight or nine hours before serving it with their signature house sauce. A couple hundred miles north at McClard’s Bar-B-Q in Hot Springs, Arkansas, they also serve gooseneck. It comes on a plate or a sandwich as sliced beef, and they smoke it as shown in the video below (check the 0:45 mark).

Gooseneck never gained a foothold in Texas like brisket and even shoulder clod, but I haven’t given up on it. I’m still tweaking a recipe that I’ll post when it’s better than just edible. At a price that’s just a bit more favorable than brisket, it could be another option for the big hunk of smoked meat that can feed a crowd.