It’s May, the month that celebrates the best of spring, the kickoff to summer, and, for barbecue aficionados like myself, a 31-day-long celebration of barbecue. That’s right. In this age of every trend getting its own day or month, May has been reserved for barbecue, a fitting designation given that Memorial Day is the unofficial start of smoking/grilling season.

As barbecue in general enjoys its appointed moment, I’m finding that barbecue books seem to be having a sort of moment too. Every year around this time, there are invariably a few new titles in the smoked meat category, but 2016 is especially robust for barbecue publishing. There are books covering the cuisine’s history, smoked meat science, and, of course, recipes. And, for the sake of full disclosure and transparency, I’m compelled to note that while I didn’t write any of them, I did have a small hand in some. I blurbed a few, contributed a recipe for one, and even ghost authored portions of another. Heck, I count most of the authors as friends. I’ll point it all out along the way so you can judge for yourself if my opinions might be tainted. Either way, there’s plenty to love about the 2016 barbecue books so far. 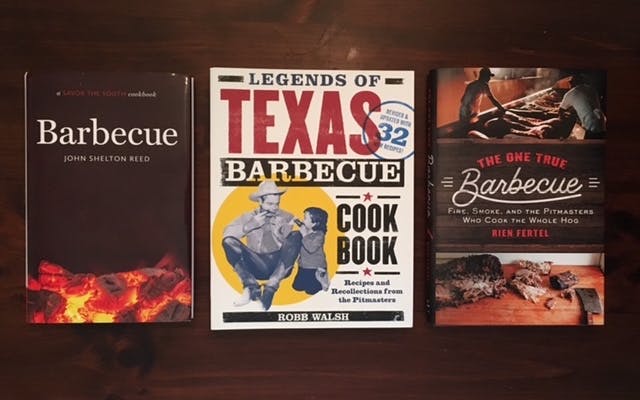 Barbecue by John Shelton Reed – Barbecue recipes from across the country are included in this book. The presentation is straightforward and concise without any photos. The diverse collection includes Texas barbecued goat, St. Louis pig snouts, and Florida-style smoked mullet. Even if you don’t cook a thing in here, you’ll come way with a deeper knowledge of the barbecue traditions across the country.
*I contributed a recipe for smoked brisket.

Legends of Texas Barbecue by Robb Walsh – Walsh broke new ground in barbecue writing when the original version of this book was released in 2002. It has been updated with stories from some of Texas’s new guard like Wayne Mueller of Louie Mueller Barbecue in Taylor, Greg Gatlin of Gatlin’s BBQ in Houston, and Justin Fourton of Dallas’s Pecan Lodge. It’s good to see living legend Tootsie Tomanetz of Snow’s BBQ in there too. Just like the original, there’s a thorough explanation of the various styles of barbecue around the state, and lots of priceless Texas barbecue history.
*I contributed a blurb for the back of the book.

The One True Barbecue by Rien Fertel – Writing about pitmasters too often settles into the shallows of hero-worship. What Fertel does in this book is get to the human side of the pitmasters while telling the story of our country’s most endangered form of barbecue: Cooking whole hogs over wood coals. Fertel pulls no punches with the larger-than-life figure of Ed Mitchell, who he compared to the Cracker Barrel restaurant chain. “[O]ld-timey, sentimentally southern, with a slight whiff of fabrication.” In Chapter 5, which he calls “the heart of the book,” he even questions whether or not maintaining this labor-intensive tradition is worth the sacrifice given by the pitmasters, some of whom never get the recognition they deserve. In a moment of self-deprecation, Fertel writes that “all barbecue writing is hyperbole,” but in this book he has proven the opposite. It’s the best book about barbecue since Smokestack Lightning, and that’s no exaggeration.
*My name is in the acknowledgements, but I think it was just to make fun of my preference for beef barbecue. 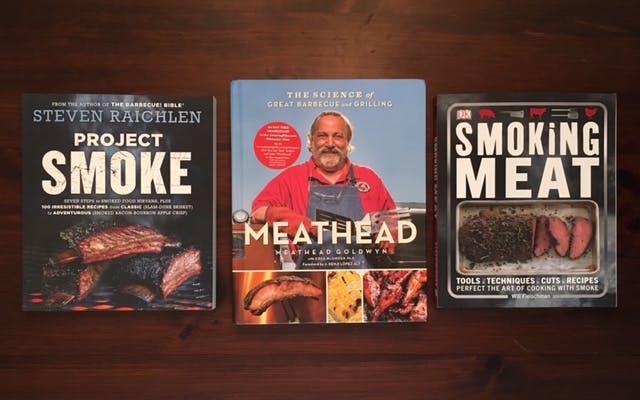 Project Smoke by Steven Raichlen – Raichlen has used his newest show, Project Smoke, to explore the huge variety of smokers on the market, and choose the right one for specific recipes. This book is essentially the spirit of the show in print. As he notes in the introduction, his previous books like the wildly popular Barbecue! Bible and Planet Barbecue! cover all things barbecue, this book focuses solely on smoked foods. That also means he brings smoke into some unexpected categories like drinks, condiments, and even dessert.

MEATHEAD by Meathead Goldwyn – With the popularity of heady cookbooks like Modernist Cuisine and The Food Lab that read more like science books, it was time for a barbecue version. Craig “Meathead” Goldwyn and Dr. Greg Blonder of the massively popular AmazingRibs.com have given it to us. Many of the great recipes from their site are included, with plenty more new ones, but the recipes aren’t the real reason to buy this book. It’s all the great experiments and mythbusting that will satisfy those who want to know the why along with the how. I contributed a blurb for the back of the book that evidently wasn’t fit for print, so here it is: You can spend years of trial and error wasting untold amounts of meat becoming a great pitmaster, or you can let Meathead do much of the work for you. The lessons in this book will give any novice a leg up, and still hold the interest of those who think they already know it all.

Smoking Meat by Will Fleischman – Fleischman left Lockhart Smokehouse in Plano late last year to strike out on his own. He is hawking a line of smokers and seasonings for Black Iron BBQ, and now has his first barbecue book published. It’s great for the beginner thanks to all of the detailed instructions and basic information about meat cuts and smoker types, but there’s also plenty of creative recipes for seasoned cooks who might be bored with the old standards. Lamb is too often ignored as a barbecue protein, but it gets a whole chapter here, and there’s even some wild game recipes for those with some elk or venison in the freezer. 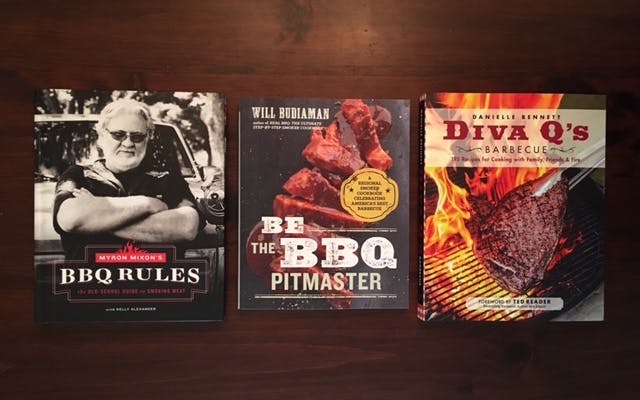 BBQ Rules by Myron Mixon – After watching Mixon desecrate a perfectly good brisket on his show BBQ Rules, I expected more of the same from a book with the same name. However, the man known for using every competition-trail shortcut in the book to turn out the barbecue equivalent of fake implants with a spray-on-tan has turned a corner. “I believe there is no substitute for making your own coals and smoking meat in a masonry pit,” is a mantra he repeats in the book. It begins with plans for a block pit, and what follows are real recipes for real barbecue. It’s easily his best book yet, and serves as one of the few out there that preach the gospel of cooking over live coals.

Be the BBQ Pitmaster by Will Budiaman – I like the breadth of the recipes here, and the individual focus on barbecue styles, but a beginner would simply need more instruction to make use of the advanced recipes. In the introduction there’s a promise made that the recipes “will guide you every step of the way, with in-depth information on ingredients, equipment, and technique.” It doesn’t. Take the brief recipe for North Carolina style whole hog. The first ingredient is “1 (90-pound) hog, dressed and butterflied.” Three words are used to describe a process of sawing off the feet of a hog, splitting open its chest cavity, and taking a hatchet to the backbone to splay it wide enough for cooking. Also, stock images were used for most of the book (like this image for brisket), which is why the potato salad recipe doesn’t include the jalapeños, red onions, or celery in the photo next to it, not to mention that the “German Potato Salad” recipe isn’t German potato salad. At least we get a few words of wisdom from an interview with Brooklyn pitmaster Tyson Ho who says “I don’t want barbecue that is adjusted for my ignorance. I want barbecue that’s authentic.”

Diva Q’s Barbecue by Danielle Bennett – Competition cook and television host Danielle Bennett lives by the mantra that “Life’s too short for bad barbecue.” In this huge collection of her favorite backyard recipes you’ve got plenty of options to make the good stuff. The colorful photos alone are the first clue to the diversity of recipes in here like smoked bone marrow, a smoked pear dessert, and even smoked kale chips. Don’t worry, your favorite smoked meats are in there too. Let one of the most successful female pitmasters out there help you sauce, stuff, season, and slather your way to a good barbecue meal. 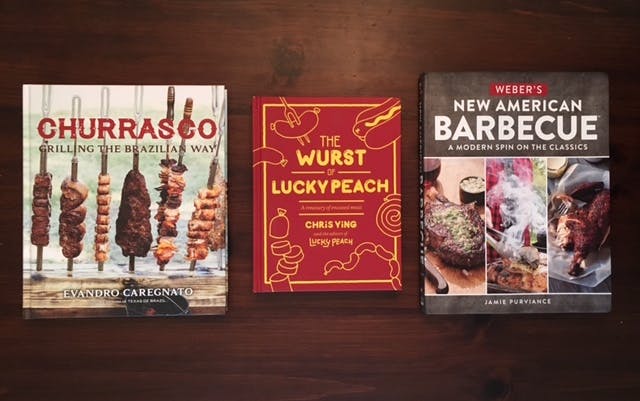 Churracso by Evandro Caregnato – I posted a full review on this book last month. It’s a collection of recipes from Texas de Brazil, where Caregnato is the culinary director, and from his upbringing in Brazil’s Rio Grande do Sul. He calls it the Texas of South America, but of course you won’t find brisket on the menu. Instead, he shares recipes for chicken hearts, beef short ribs, and beef pichana, the signature cut of churrasco.

The Wurst of Lucky Peach edited by Chris Ying – Recipes, essays, and history lessons about your favorite sausages share pages in this ode to meat in tube form. It’s really more of an exercise in sausage worship than a book. There’s plenty of the familiar like frankfurters and kielbasa, but have you heard of Icelandic pylsa or the lamb-based Navajo specialty of ách’ii’? In one essay, Amelia Gray recounts a few days of sausage-making in Austin with her father in tow. She shares some humorous scenes in the kitchens of Freedmen’s, La Barbecue, and Micklethwait Craft Meats in what is basically a report from the front lines of American sausage creativity.
* I helped one author make contacts in the sausage-making world.

Weber’s New American Barbecue by Jamie Purviance – Rather than rehashing barbecue recipes that have already been done to death, Purviance sought out fresh takes on cooking meat with fire. There’s hardcore Southern barbecue in there like beef ribs from Wayne Mueller and brisket fundamentals from Aaron Franklin, but there’s plenty of grilling too (it is from Weber, after all). It’s nice to get more than a couple recipes for grilled and smoked seafood, and this book delivers there, but the best thing is that these recipes all have an originality to them. There are no throwaway recipes in here.
* I contributed some of the essays in the book.