Spring, Texas is evidently large enough for more than one great food truck. This town of 50,000 just north of Houston has been home to Corkscrew BBQ, a Texas Monthly Top 50 selection, since 2011. Now, just five minutes east is a new food truck park where BBQ Godfather sits between a Cajun food truck and The Cupcake Shack. Word is starting to get out and owner Tony Faour said business grows every week.

A few picnic tables under a white tent serve as the dining room in front of the trailer where Faour smokes a wide menu of meats. They all get doused in the same smoke in an Ole Hickory smoker mounted inside the trailer, but that’s where the similarities end. Unlike many barbecue joints who sprinkle the same salt and pepper mix on everything, each cut here gets a unique treatment. 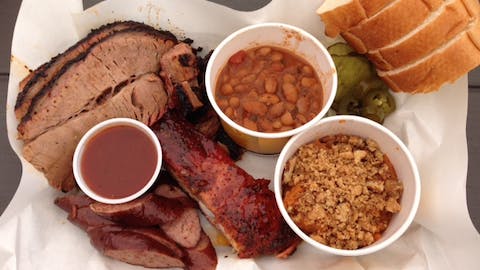 A sweet glaze gives the big spare ribs their glossy look. There’s a good dose of black pepper and smoke on the rib. A little more time on the smoker would have helped the texture, but the flavor was great. A sausage from Chappell Hill Sausage Company comes in raw, so it takes on the smoke well. The links were juicy with a great snappy casing, and were further evidence of how much better a sausage that starts off raw can taste when it comes off the smoker. 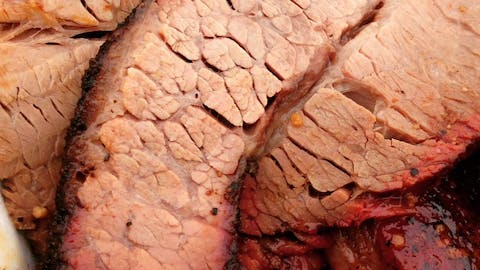 It takes three rub applications to get the flavor that Faour looks for on his brisket. There some sweetness, saltiness, and a little spice. It’s a trio of flavors that betray his history in competition barbecue. Faour explains “There’s salt and pepper, then my barbecue rub, and my brown sugar rub that only goes on top to help caramelize the top.” A stout crust was surprising after hearing his brisket smoking method that includes a loose wrap in aluminum foil, but it was spot on. It was also expertly cooked. It’s rare to find a brisket that reaches the perfect level of tenderness in every bite, no matter if it’s from the lean or the fatty side. Couple that with a supreme juiciness, and this is a brisket worth driving up from Houston to eat. 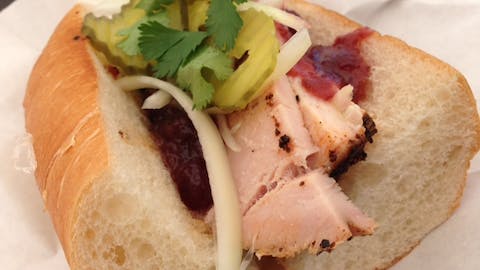 You won’t find cheap white bread at this trailer. Faour notes “Mrs. Baird’s doesn’t add up here. This is the godfather, so we’ve got to have an Italian hoagie.” That hoagie is served up sliced on every plate as well as being the sandwich bread. Peppery slices of turkey was paired with a cranberry barbecue sauce, pickles, onions, and a few sprigs of cilantro. It all made for a great sandwich, but the next was even better. 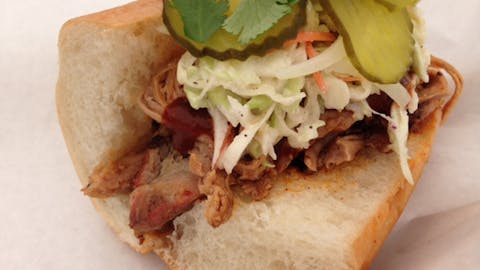 The rub was so thick and spicy on the pulled pork that I swore a sauce had been slathered into the mix. Faour swore it was all in the rub. A crunchy slaw helped mellow the heat, and put the flavors in balance. This is the sandwich I would come back for. I’ll also have to come back for some of the specials like pork belly on Thursdays, smoked chicken halves on Saturdays, and boneless beef short ribs once he perfects the smoking method.

A side of beans was admirable, but it was a dish of sweet potato casserole that was memorable. It straddled the line between side dish and dessert, and I was happy to let it do double duty. After the last bite I was already thinking about the next time I could drop by. Maybe it’ll be after I find the line too long at Corkscrew, or maybe I’ll just have a craving for great barbecue on a worthy roll.