– Wayne Mueller announced at an event in Houston that he’s searching for the right location in Houston for a second location of Louie Mueller Barbecue.

– Ronnie Killen plans to open his new barbecue joint in Pearland on 2/11. He has high hopes of course, saying “It’s probably going to be the nicest barbecue place in Texas.”

– 3 Stacks in Frisco has completed their renovations. No more meat counter, just servers and more tables.

– Men’s Journal is filming Taste of Texas, and they made a stop at Pecan Lodge:

– Another “Best BBQ” list. This one lists the ten best cities for barbecue, and it’s complete with stolen photos and a photo of Cooper’s Big Chop with Kreuz Market in the caption.

– The Dallas Morning News used a reader poll to determine the best barbecue in the area, and Hutchins BBQ in McKinney won. 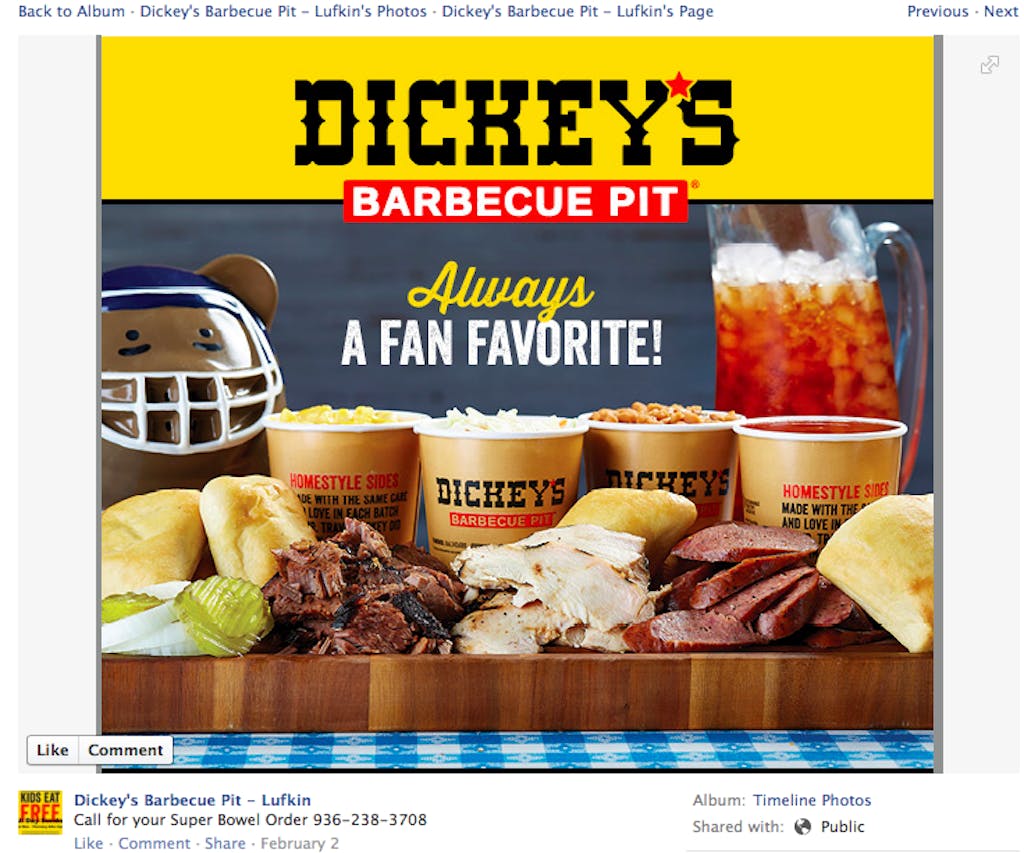 – Not sure if the Dickey’s in Lufkin was trying to slimly skirt the “Super Bowl” trademark, or if they just meant what they said with the Super Bowel special. The screen capture is above in case they erase it.

– Dickey’s BBQ has started offering a couple of sandwiches on buttery cornbread buns.

– Per Eats Beat, a new Spring Creek BBQ location near Fort Worth has the option for marbled “Hill Country Brisket” on the new menu.

– A location of Spring Creek BBQ outside of Houston went up in flames. 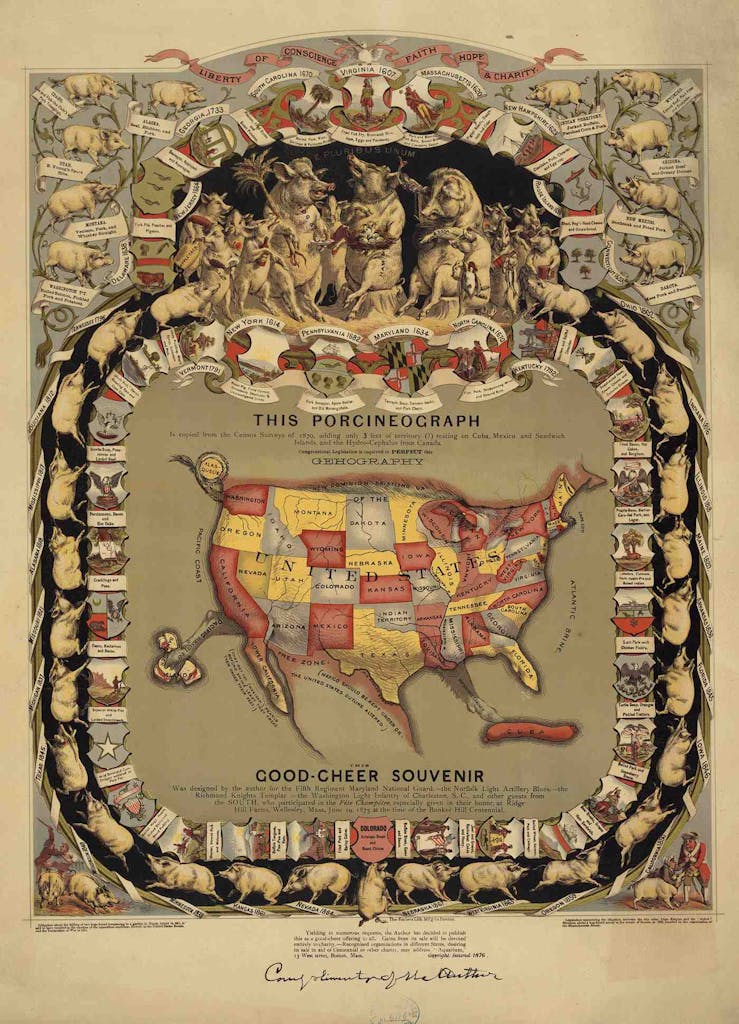 – A giant map showing how was pig was enjoyed across the US was commissioned by a sewing machine magnate in 1875. The pork dish listed for Texas was “Wild Steer and Cord Dodgers wobbled in Pork Fat.”

– Here’s a helpful guide to some popular sausages around the world.

– Aaron Franklin is writing a book on barbecue that will be released next year.

– A new barbecue joint is coming to Portland. Sadly, the best barbecue had by the owners was in Kansas City. It seems they didn’t make it to Texas on their barbecue research tour.

– Chicago chef Charlie McKenna of Lillie’s Q shares his thoughts on the future of barbecue.

From the Wild from Dark Rye on Vimeo.

– A pig farmer shares his mixed feelings about raising animals for slaughter in Modern Farmer.

– Meathead also brings us a really well researched piece on the science of wood smoke.

– That’s my kind of wedding cake:

– Food Republic just found the map of American barbecue that we published back in June, and they think it’s pretty rude.

@DallasLockhart You know I heart you guys, but if knew times were so tough to be in Brian Loncar ad, I’d eat more. pic.twitter.com/TtDZKNYV7r

– The Observer also provided a slideshow of great smoked meat around Dallas and Forth Worth.

New hours @JSM_meat give Austin a new Monday BBQ option. Thur-Tues 10:30-6 or until sold out. John’s only taking Wednesdays off.

– The barbecue (and other menu items) of Work Bar & Grill in Dallas are the feature of this D Magazine profile.

– This list of meaty meals in D/FW includes Pecan Lodge and Woodshed Smokehouse, and plenty of sass about the glamorization of meat.

I don’t know what you’re grocery store carries, but this is what a true whole beef brisket looks like. Thx aaron! pic.twitter.com/53bwgFD0ek

– American cattle herds are the smallest they’ve been since 1951.

-A big beef recall out of Fort Worth.

– 4 Rivers Smokehouse in Orlando is offering a brisket candle for Valentine’s Day. So romantic.

And Britney’s dad gave us homeade BBQ, it was one of the best things I’ve ever eatin’ in my LIFE.