– On this Valentine’s Day weekend, the Houston Chronicle reminds us that Killen’s Barbecue in Pearland is a good place to dump someone.

– “We are in a weird, like, barbecue bubble…Somehow barbecue has become a thing.” – Aaron Franklin of Franklin Barbecue in Austin:

Brisket was cheap and delicious. Now it’s expensive and you have to wait in line: http://t.co/x1ogp0HCgl pic.twitter.com/VAqnoEEMho

– In Esquire, Josh Ozersky misses a chance to simply highlight the great work of a little-known pimaster, and instead uses the article for a cheap shot on Columbus, Ohio which is home to Ray Ray’s Hog Pit.

– Here’s a new BBQ list from Seattle if you’re looking for good barbecue in the Northwest.

– Let me get this straight. A Chicago style pizza place in San Mateo, California is also serving Texas style barbecue? 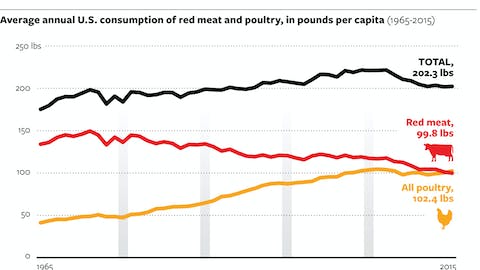 – Brisket prices are rising and restaurants are responding with higher prices to reflect it. Louie Mueller Barbecue in Taylor is now charging $19.99 per pound, and Stanley’s in Tyler is up to $19 even.

– Due to rising brisket prices, Vitek’s in Waco is offering a non-brisket version of their popular Gut Pak called the Porky Pak.

– Barbecue prices are up in Houston too, and Josh at Pizzitola’s explains why.

– On the bright side, at least brisket is cheaper than raccoon, which was $9.99 per pound in LA.

– Not your typical BBQ plate:

– Tickets for this year’s Houston BBQ Festival go on sale today at noon.

– Red Dirt BBQ Fest in Tyler has announced their line-up of barbecue joints.

– “In my opinion, no true Texan should wait in line for Texas barbecue, but I’d be lying if I said I’m not envious.” – Matt Sullivan of House Park BBQ in Austin on the lines at Franklin Barbecue and the lack of lines at House Park.

– Houston’s My Table Magazine features barbecue ribs, including those from Virgie’s Bar-B-Que.

– Build it, and they will give you brisket:

– Texas Brew & BBQ was impressed with a visit to Killen’s Barbecue.

– The Smoking Ho isn’t so enamored with the barbecue at County Line, but he enjoyed the bread.

– After the departure of Gavin Cleaver, the Dallas Observer is looking for someone to write about barbecue.

– Do you recognize this photo?

Where to get the best BBQ in Austin, TX, according to a chef http://t.co/lJhG2d3HUx pic.twitter.com/pCteZLCi4D