– Zagat Austin lists their favorite barbecue events around the state this summer.

– Gayot comes out with their list of the top ten barbecue joints in the country.

– CheapTickets.com has a list of their top BBQ destinations. In Austin they highlight a humorous paring of events – a meal with John Mueller followed by the Austin Symphony.

– They’re trying their hand at smoked brisket in North Carolina, and even knocking off a Texas style barbecue sauce:

– The play BBQ Apocalypse will run through this weekend in Dallas.

– On the importance of barbecue and red drinks when celebrating Juneteenth.

– Here’s how to win a year’s worth of barbecue, mailed to your home.

From Lockhart to Austin, on Barton springs road, Terry Black and family will be open early next week!!

– An interview with Erin O’Shea about her Texas style BBQ joint in Philly.

– A profile on Ash Fulk who is cooking Texas style BBQ in Brooklyn at the new Hill Country BBQ outpost.

– You might need Google translate, but here’s a French interview with Thomas Abramowicz who is doing Texas style BBQ in Paris, France.

– Looking for beer and barbecue in Houston this weekend?:

Looking forward to some pulled pork on Saturday! #HouBBQ pic.twitter.com/vvAPzFzogT

– John Markus, the creator of BBQ Pitmasters, had Ruth Reichl over for dinner. They had beef ribs, pork ribs, and smoked chicken.

– Steven Raichlen on inspiring the next generation of pitmasters.

– In honor of the World Cup, Bon Appétit provides this list of sausages around the world, one for every country competing in the World Cup.

– A tutorial from Pat Martin:

Ssssmokin’! Want to smoke some meat but don’t know how? Here’s a primer for newbies http://t.co/hUHscKybtT pic.twitter.com/B7bLCDCHOQ

We’re closed next week- so maxed out our smokers all week. still have a little food if u come soon!

– The Austin Post used the captive audience in the Franklin Barbecue line to get answers to random questions.

– Kerlin BBQ in Austin is closed today, but will reopen tomorrow.

– Pecan Lodge in Dallas will be closed for a private event on Saturday 6/21. 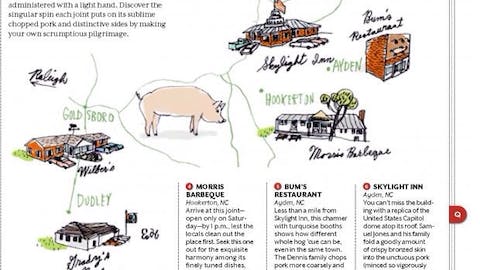 – Burger Mary visits La Barbecue in Austin, and has great things to say about the entire menu.

– The Smoking Ho has an equally great experience at La Barbecue.

– Huffington Post finds a way to get “Barbecue” into this headline, but it’s really all about side dishes.

– Does anyone know what she’s talking about? Disgusting BBQ smell?

I ate at a BBQ restaurant today and now I can’t get this disgusting bbq smell off my fingers.. What should I do? HALP!