– Killen’s BBQ in Pearland had their pit stolen, then recovered a couple of days later.  This after having a hot brisket stolen straight from the pit last month. I think they need a smoker enclosure.

BBQ pit has been found, a little more paint added, but found. pic.twitter.com/NORKcM2YoW

– A man brought his smoker onto the subway in New York over the 4th of July holiday.

– Ralph Parker of Parker’s BBQ in Wilson, NC passed away on July 4th.

– After eighty years of having just one location in Lockhart, Black’s BBQ is expanding to another location in San Marcos.

– Lockhart Smokehouse of Dallas is expanding to Plano with their second location.

– Slow Bone in Dallas played host to several of the state’s pitmasters in an event to benefit Café Momentum.

– That Schmidt Family Barbecue in Bee Cave is coming along:

– Kenny Hatfield has left/was forced out of Hatfield’s BBQ & Blackjack Beer Garden to open his own venture called Hatfield’s BBQ. He’s brought along some help:

– Steven Raichlen, author of the BBQ Bible, visited Franklin Barbecue and calls it the best brisket in Texas.

– Of course Portland’s best BBQ is a Texas style joint owned by a Texan who learned how to make barbecue in Texas – Podnah’s Pit BBQ. 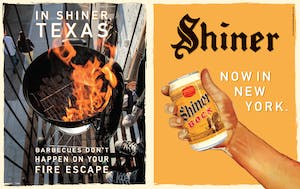 – A Shiner beer ad (tweet by @JohnMartinIV) announcing their availability in New York is a funny one.

– The Doctors show featured a segment on Pecan Lodge’s barbecue. The point was to find something healthy about it, but I think the host just wanted an excuse to eat their brisket.

– A few notable pitmasters in Nashville had a round table discussion about the direction of competition barbecue.

– Finally, the date for ticket sales to the Texas Monthly Barbecue Festival has been announced. Mark your calendars for 8/29 to get your tickets for the vent that will be held on 11/3.