– Tickets for the Texas Monthly Barbecue Festival are sold out.

– In an interview in Scientific American, Richard Wrangham says that barbecue is what made us human starting back a couple million years ago.

– The US Open tennis tournament in New York will be serving barbecue this year from Hill Country BBQ Market in Manhattan. From the photo I guess it’s not meant to be a whole meal.

– One of the Queen’s swans was abducted and barbecued in England.

– Jack Perkins of the Slow Bone in Dallas posted an interesting after-hours voicemail (or three) that his business received:

– An interview with John T. Edge of the Southern Foodways Alliance covers everything from Helen Turner’s barbecue to a failed attempt at erecting a civil rights memorial in Oxford, Mississippi.

– Hog’s Heaven Barbecue has moved from downtown Weatherford to a new location along Highway 180 in Hudson Oaks.

– 3 Stacks Smoke & Tap House in Frisco supplied 60 racks of ribs to the Rib Club of Southlake this week. More importantly, there is a Rib Club in North Texas. In addition to 3 Stacks, member Art Hobbs raves about the ribs at The Corner Stable in Baltimore, and none other than the mayor of Southlake, John Terrell, wrote to Hochatown BBQ in Broken Bow, Oklahoma with his endorsement of their ribs. The mayor explains “This is no ordinary rib club. On the evening of the event we had present several Tarrant County and municipal judges, several former NBA and NFL players, the Mayors of Southlake, Keller, Trophy Club and several other cities, the General Manager of the Southlake Hilton hotel and numerous other discriminating barbecue officianados [sic].” Quite a club.

– It’s called the Texas Brisket Cheeseburger at Sonics across Texas, but Oklahoma locations have the option too. They also allow for a very odd addition to your bun.

– The Baker’s Ribs location in Weatherford has now switched to hormone and antibiotic free briskets from Creekstone Farms. 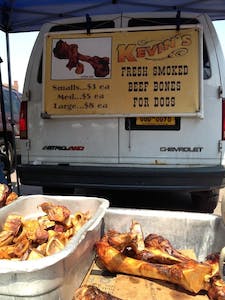 – Jim Shahin found a vendor in Washington DC that figured dogs might like barbecue too. They’re offering smoked beef bones.

– Meatpaper magazine has been a favorite of mine for a few years now, so I was sad to see that issue #20 will be their last. You can still purchase back issues and browse through a number of free articles here.

– The USWNT likes barbecue. Women’s soccer star Alex Morgan refueled at Oklahoma Joe’s in Kansas City after a game there.

Eating BBQ watching wny vs SkyBlue with the team. Trying to enjoy KC while we can 🙂 — Alex Morgan (@alexmorgan13) August 25, 2013

– Noble Pig in Austin does some recipe compiling and offers a long list of barbecue sauces to make at home.

– Cattle rustling in Texas and Oklahoma has seen a 40% increase this year against the 2012 numbers.

– Austoberfest is coming to Austin’s Saengerrunde Hall on September 28th.

– The Bedford Blues & BBQ Festival is coming this weekend. Of course there will be Blues all weekend, and a KCBS sanctioned BBQ competition on Sunday.

– Longoria’s BBQ in Everman is looking to expand their business via some franchisees.

– The reality show BBQ Crawl will be filming at Longoria’s BBQ on Friday morning from 9-11. They also plan to film at the OinknMoo BBQ trailer in Dallas.

– “Zilmax adds an average 28 lbs. to the live weight of cattle it is fed to. More than 35% of cattle marketed each week are estimated to have been fed Zilmax.” Now Zilmax may be a thing of the past with the bulk of large beef processors no longer accepting cattle that have been fed this growth enhancer.

– This couplet of tweets from the Corpus Christi Caller Times is self-explanatory:

– John Avila, who was once an employee at Franklin Barbecue, will be at the helm in when Morgans Barbecue opens Saturday in Brooklyn.

– GQ’s Alan Richman went to the Mighty Quinn’s BBQ booth at Smorgasburg in New York. He said they wouldn’t serve him until an adequate line had formed. An owner of Mighty Quinn’s simply said they weren’t ready to serve food yet. Who knows who’s telling the truth, but it’s fun to read Richman going on about his distaste for lines. Even more fun is his very detailed response to being called a liar.

Can’t believe I had to make this sign today! But we will get ’em learned or die try’n… #TXBBQ @tmbbq pic.twitter.com/P3LqzNePsF

– Since the TMBBQ Festival tickets are sold out, grab a ticket for the Meatopia Texas event in San Antonio.