– The American Royal barbecue competition, aka the World Series of BBQ, was held last weekend. Tuffy Stone and his Cool Smoke team beat the big boys in the Invitational on Saturday while Iowa’s Smokey D’s BBQ beat out 535 other teams in the Open competition on Sunday.

– A barbecue competition was held in Grapevine to help raise money for Camp Craig Allen. Here’s a report.

– Thrillist with a humorous take on how Angus has jumped the shark.

– The Food Film Festival comes to New York starting 10/23. One of the films selected for the festival is The Kings of BBQ: Barbecue Kuwait directed by BBQ Pitmasters producer John Markus.

– BBQ on the Brazos in Cresson has added a new menu item:

– Five to ten percent of the cattle herd in western South Dakota were killed during the severe blizzard there last week.

– Beef herd sizes are way down in Texas too thanks to the drought. There’s a training session in Jacksonville next month for ranchers looking to increase their herd size.

– Burger Mary writes for an Aussie audience who might not be familiar with American cuts of beef. Her blog post on Texas brisket includes a butchery demonstration video with Austin’s own Reece Lagunas.

– Anticipating some big crowds for the TX/OU game (kickoff at 11:00 CT), Pecan Lodge is opening the express line an hour early:

Express Line opens at 10am for TX/OU game on Saturday. 5lbs or more and your in/out in 15 minutes or less and home for kickoff!

– Eater Dallas released their list of the 38 Essential Restaurants in Dallas. Smoke, Woodshed Smokehouse (in Fort Worth), Lockhart Smokehouse and Pecan Lodge made the list as barbecue representatives.

– Eater Austin released their own list which includes Franklin Barbecue and la Barbecue.

– Texas Monthly will host a BBQ Food Court during the Texas Book Festival in Austin later this month.

– Sheri Giblin has shot ad campaigns for Chobani Yogurt and Dominos Pizza, but her latest venture is photographing the pig slaughtering process.

– Because the sausage world needs more tequila-lime and nacho cheese:

Stoked to c my new line of #sausages at #walmart. Check out the 4 killer flavors! pic.twitter.com/5eg8seQxrd

– Tonight at 6:00 Stiles Switch in Austin kicks off their “Live at the Switch” live music series. Details here.

– Zagat names an official sandwich for every state. Brisket on Toast is their entry for Texas. I wonder if they know that’s not toast in the photo or on Franklin Barbecue’s menu.

– Dale Earnhardt Jr. came to the Hard Eight BBQ in Roanoke. Of course he talked racing, but barbecue was also heavily discussed. We’ll have more of the BBQ comments from that press conference soon.

– The Granary in San Antonio has released a new dinner menu. The description of the new dish sounds good, but the photo did make me chuckle a bit.

– A New York blowhard is coming to Austin to see if the barbecue here can compare to New York BBQ. This should be good.

– Those new NYC BBQ joints keep popping up. Here’s a report on a few from Robert Sietsema.

– The 30th Annual International Bar-B-Que Cookers Association Cookoff will be held on Saturday and Sunday at Traders Village in Grand Prairie.

– Tyler’s Barbeque in Amarillo was the big winner in the barbecue category in this year’s Best of Amarillo list.

– The Travelocity Roaming Gnome made his way to Austin to eat some barbecue:


[<a href=”//storify.com/bbqsnob/the-roaming-gnome-came-austin-for-some-bbq” target=”_blank”>View the story “The Roaming Gnome came to Austin for some BBQ” on Storify</a>]

– A Salt Lick alum in New Jersey and will run a barbecue joint at the Meadowlands Race Track called House of ‘Que.

– A profile on salt and pepper. Salt has never fallen out of favor as a flavoring, but we may have Louis the XIV to thank for the rise of Texas’s second most popular brisket rub ingredient – black pepper.

– This month’s Spenser Magazine has a great story on Payne’s BBQ in Memphis. You’ll also find articles about a Tennesee butcher and Allan Benton’s hams and bacon.

– Here’s how they announce the daily BBQ special in McMahan, Texas. They’ll have ham on Saturday at R&G BBQ if you’re interested. RSVP is helpful. 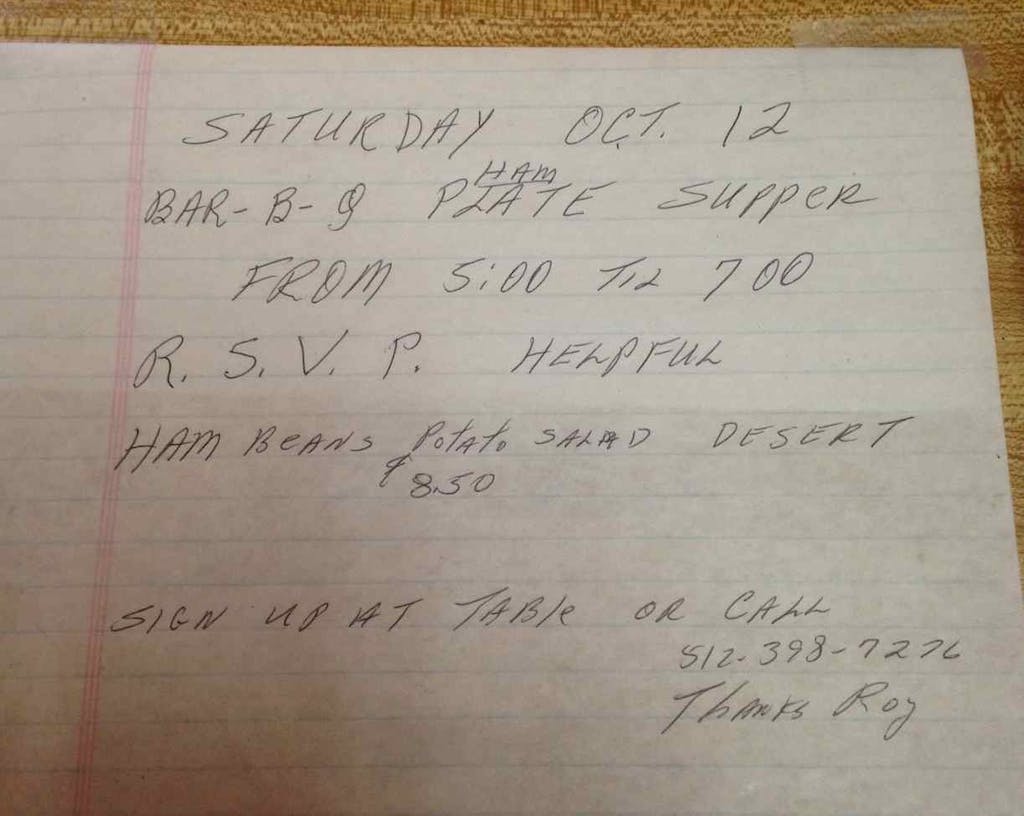 – Reserve a spot for Dia de los Puercos at Four Corners Brewery in Dallas on 10/27. Kent Rathbun will be there doing a barbecue demonstration and serving pork barbecue.

– As Teresa Gubbins reports, the “unpretentious shack” that houses the original Sonny Bryan’s in Dallas has now added a new craft beer room.

– Texas Rangers CEO Nolan Ryan is working on the The Nolan Ryan Beef and Barbecue Cookbook. It will be out sometime next year.

– RIP Swino. He’s the feral hog we reported on a few weeks back that got drunk and started a fight with a cow. It seems he lost a fight with a truck.