– Meat Fight is a barbecue competition held in Dallas this weekend. Chefs compete with their versions of barbecue, while pitmasters (and Ron Swanson) do the judging. One of the competing chefs is Dallas’s Brian Luscher, and he helped (we think) produce this parody video of how he’s changed since winning last year’s title along with team Meatallica:

– A report from Mississippi: Brisket is difficult, so just give up and smoke a tenderloin if you want beef barbecue.

Pretty certain we all need more of this. pic.twitter.com/cnr6zym0ud

– “All the grillin’. None of the killin’!” is the tag line of a new vegan barbecue truck in Austin (where else?). BBQ Revolution is their incredibly optimistic name. Their Facebook page indicates they have a smoker, but their “ribs” are made of tempeh. We predict multitudes of Texans approaching a truck called “BBQ Revolution” then walking away confused, shaking their heads, and driving the half mile to Stiles Switch BBQ.

– The pastor at the Pioneer Drive Baptist Church in Abilene has the right idea:

@BBQsnob “Food, especially BBQ, is gift of from the Lord” preacher during a sermon on fasting

– Fort Worth Magazine readers and editors chose Railhead Smokehouse as Ft. Worth’s best barbecue with Cooper’s and Angelo’s close behind. Woodshed Smokehouse placed in categories of Meal with a View, Outdoor Dining, and Place to Take Visitors.

– Tim Love and Jesse James designed a barbecue truck. This Toyota Tundra is built for tailgating, but where’s the smoker?

– I’m not sure how we missed this from last month, but ESPN.com gave a nice shout out to Vitek’s while praising the Baylor offense: 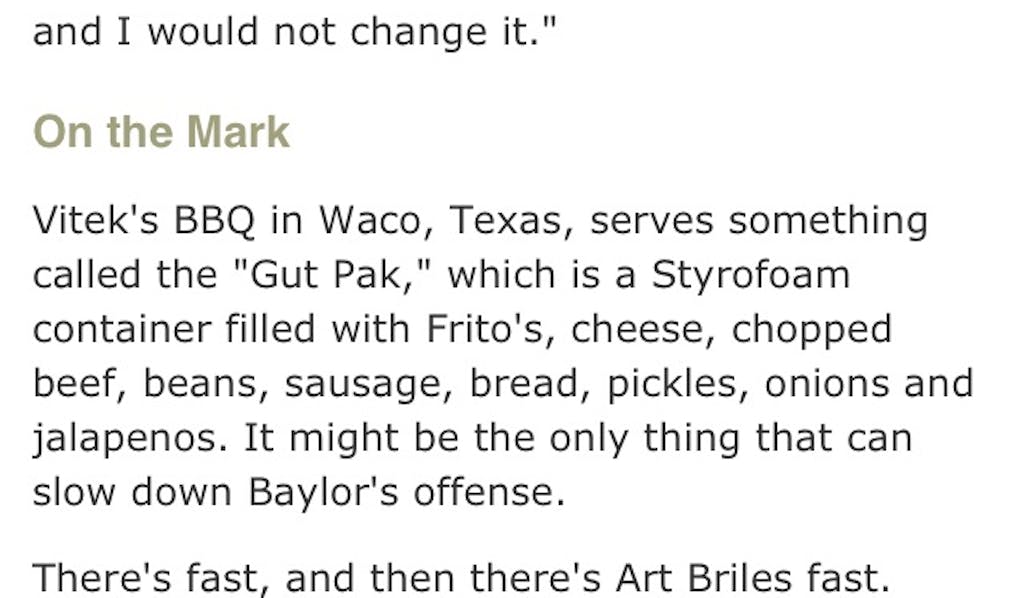 – The barbecue photography of Robert J. Lerma was featured in the current issue of SMTX magazine.

– Somebody had ribs on the brain when they wrote this promo:

@darrenrovell He specializes in ribs, and apparently he’s going to lead the @dallascowboys vs the @Saints tonight. pic.twitter.com/XfwER8bsU0

– An interview with Steve Coddington of Lockhart’s BBQ – A Texas style barbecue joint in Michigan.

– This is what they do to barbecue in Georgia:

Very excited to try this BBQ pie from Blue Frog Foods here in ATL. Thanks to Patrick @heywoodsprovisions! pic.twitter.com/7w1N3w6Cph

– Broussard’s Links + Ribs in Beaumont is profiled in their local paper.

– An Australian newspaper has ranked the top 20 foodie experiences in the world. Franklin Barbecue in Austin is #19.

– Christmas is coming, and this is creepy from Micklethwait Craft Meats:

– The Austin Barbecue Society will meet on 11/18 and Tom Micklethwait will do the cooking. Tickets available here.

– A bit of very dark barbecue noir for your reading pleasure.

– The rib category at the World Food Championship was won by the BBQ Guru from Pennsylvania.

– Kerlin BBQ in Austin has expanded their hours, and they’re now open W-Sun 11-3.

– Full & Content spends a day with John Lewis of la Barbecue. He’s always pushing his recipes, and the results are stunning. “Cuisine’s been evolving since… forever…Why shouldn’t BBQ?”

– Buried in that story on la Barbecue is the fact that they are planning to move, possibly to East 6th and Waller in Austin.

– It continues to amaze me, but London really loves barbecue.

– Trading Post BBQ in Azle has closed and their old steel pit has been out out to pasture:

– The Dallas Observer is celebrating Meat Week, and it begins with a history of this weekend’s sold out Meat Fight. Also included is the Observer’s take in the barbecue sauce conversation, barbecue sides, Jamaican jerk barbecue, and a Dallas pork rib battle.

– Ivory Lee Waldrup of Burns BBQ in Houston has passed away.

– First it was nacho-flavored sausage, but now Guy Fieri has really jumped the shark:

@BBQsnob I saw this at Costco the other day pic.twitter.com/MGxdtZIH8u

– How far does smoke penetrate into your barbecue meat? Not very far says Greg Blonder.

– The Southern Foodways Alliance has been collecting oral histories from Georgia barbecue joints, and the collection was released this week.

– The Lockhart Smokehouse in Plano is under construction:

Squint and you can see the serving counter pic.twitter.com/LMpVCAZqti

– Finally, things can be rough on the barbecue trail. Blogger Bryan has a near brush with death on his motorcycle last month, and is on the road to recovery. It’s good to see that barbecue wasn’t his last meal.