– The FDA has announced that they will restrict antibiotic use in livestock animals. The move “will effectively make it illegal for farmers and ranchers to use antibiotics to make animals grow bigger.”

– Rolling Stone published a story on abuse of animals at factory farms. It’s a long read, but an informative one. Some of the facts portrayed as big shockers are well known to anyone familiar with meat production, but the abuse that undercover activists have documented is sickening. Ag-gag laws aren’t going to stop these activists who are about the only watchdogs that exist in factory farming.

– From the archives is an incredible recording of C.B. Stubblefield of Stubb’s BBQ fame talking smoked brisket and turkey with Jesse Taylor over a soundtrack by Joe Ely.

Alrighty folks for those of you that still don’t know where our new location is be looking for out sign on IH-35 pic.twitter.com/1ZSOofkIvH

– Micklethwait Craft Meats in Austin is having a one year anniversary party on Sunday.

– La Barbecue will have the grand reopening party this Saturday.

– Give the gift of Meat Sweats:

– The Slow Bone and Stampede 66 are listed in the Dallas Observer’s list of best new restaurants of 2013.

– Someone in a Z71 Chevy pick-up helped themselves to a load of pecan wood at Stanley’s Famous Pit BBQ in Tyler. Do you recognize it?

– You have until 12/29 to submit your audition tape for season 5 of BBQ Pitmasters.

And it must be easy, cuz everyone’s doing it! To include a Memphis company who specializes in cheesesteak? @BBQsnob pic.twitter.com/0jworTTDGR

– The (Secret) Rise of Mutton from Modern Farmer. Also, did you know that the the country’s largest sheep and lamb auction is in San Angelo, Texas?

– Trying to find good BBQ in LA? Eater has you covered.

– Are you in Italy and want to know how to smoke a brisket? BBQ4All might be able to help:

– Cameron Diaz talks to Food & Wine about getting “naughty with sausage” and fond memories of soaking up beef fat and blood onto a slice of bread for a snack. 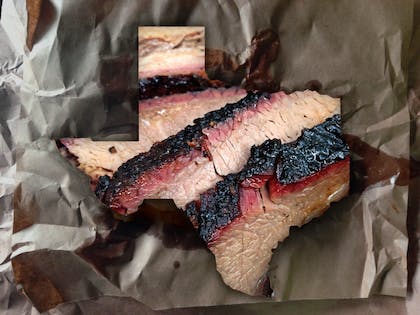 – Texas Monthly began a campaign to change the state dish of Texas from chili to brisket. Read a plea from Paul Burka and case from TMBBQ on why Brisket>Chili.

Chili’s been slung in this state for more than a century longer than the barely-50-year-old historical novelty of smoked brisket.

– And a vote for ice cream:

@BBQsnob @DFWBBQ @dallasfoodorg Guys arguing over Brisket or Chili being state food of Texas when we all know it’s Blue Bell Ice Cream.

– Note: The Governor did not send chili:

.@BobbyJindal Making good on our TAMU/LSU bet. 100 lbs of @BertsBBQ brisket en route to LA for a great cause. pic.twitter.com/vAXat9Mvqu

– Chefs share their most overrated and underrated cuts of beef. Most go with filet mignon for overrated, but Adam Perry Lang says it’s brisket. He prefers beef short ribs.

– There was a much-discussed Chanel fashion show in Dallas this week. From the coverage we learn that when Coco Chanel visited Dallas in 1957, Stanley Marcus arranged a Texas-style barbecue for her at his brother’s ranch, and at least one bovine wore a strand of pearls.

– From Stanley Marcus’s memoir Minding the Store, we learn that Chanel wasn’t too fond of the barbecue. Coco “didn’t like the taste of barbecued meat…so she dumped her plate surreptitiously under the table.”

Coco Chanel & Stanley Marcus at the BlackMark Ranch in 1957, from his memoir Minding the Store (1974) @BBQsnob pic.twitter.com/v2ZSViraJm

– Theories on the origin of the word brisket. It’s anything but a clear etymology. Thanks to @dallasfoodorg for the link.

– In the current issue of Smoke Signals magazine is a history of Brunswick stew. It starts on Page 8. – The 12 Days of Smoked Meat specials from Stiles Switch in Austin:

We hope you are resting up! Tomorrow marks the 1st Day of The #12DaysOfSmokedMeats at Stiles Switch! Who’s ready!? pic.twitter.com/NTw1YOcW1p

– Filling a barbecue void in El Paso, Famous Dave’s makes plans to open its third location there. They have 192 locations worldwide.

– Andrew Zimmern went to Nashville for his show Bizarre Foods America and he visited Martin’s BBQ and Peg Leg Porker, two of my favorites.

– This short documentary trailer from Discover South Carolina makes a bold and most likely unfounded claim: