– “Praying to The Altar of BBQ in Texas” from Trivago.

– Carolyn Wells and the KCBS traveled to Europe to help them put on a proper barbecue competition. The article goes into how to judge barbecue along with describing just how popular American cuisine, like barbecue and burgers, has become in Europe.

– KTBC in Austin looks at the affects of high meat prices on local barbecue joints.

– Beef doesn’t look to be getting any cheaper:

– A thief stole parts of the toilets at Red River BBQ in Houston.

– A Wisconsin man was killed instantly when a blast inside his homemade smoker blew the door open into his head.

– A Detroit BBQ joint owner is in some hot water for disparaging Facebook comments. The local news wondered how it would affect the business in the long term.

– A video about burnt ends shot in Austin:

– The Smoking Ho had some ups and downs at the new Kent Black’s BBQ in San Marcos, and found some pretty average barbecue from Rudy’s.

– To sauce or not to sauce, asks the Houston Chronicle.

– The inauguration of our new governor and lieutenant governor will feature a barbecue. Get your $10 tickets for the 01/20 affair.

– Berkeley, California will soon have a vegan butcher shop.

– A photographer spent a few days on the Slagel Family Farms in Illinois to document their pig slaughtering operation.

– Meat has remained relatively cheap because the big boys process it faster and faster, but that speed has other costs.

– But then, raising beef might actually be good for the planet.

– Louie Mueller Barbecue in Taylor will be henceforth closed on Mondays, but will be open on Sundays. Weekend BBQ warriors rejoice.

– If you’ve always wanted to spend more time at Louie Mueller Barbecue, now is your chance. They’re looking for a pit apprentice.

– Louie Mueller is also about to have their own brand of barbecue sauce on grocery store shelves.

– Hays Co. BBQ in San Marcos is also getting into the barbecue sauce game with their own brand of bottled sauce.

– More BBQ and travel stories together:

– Chef Kent Rathbun will open Hickory Kitchen, featuring burgers and barbecue, in Plano in the spring.

– The Cheap Bastard finds a cheap meal at Ten 50 BBQ in Richardson.

– Zagat includes The Slow Bone and Pecan Lodge in their list of great sausages in Dallas.

– There’s a new barbecue joint coming to Dallas serving Kansas City style barbecue. In the announcement, the Dallas Observer notes that pork ribs are “woefully underrepresented in Dallas”. That came as a surprise. 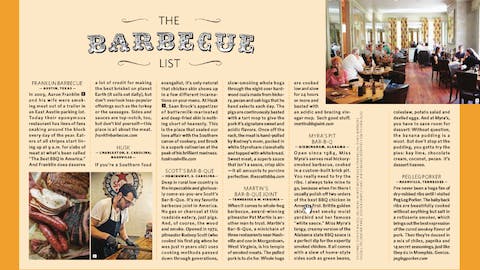 – Evan Leroy of Freedmen’s Bar in Austin covers the knives that every pitmaster needs.

– Franklin Barbecue in Austin gets some love from Food Republic in the end of year wrap-up.

– A look at the chicken-fried beef rib special from Stiles Switch.

– The Houston Chronicle praises the barbecue from Pappa Charlie’s, and shares some of owner Wesley Jurena’s struggles working out of a trailer.

– A Nashville pitmaster looks to get into the pit building business.

– LC’s BBQ in Kansas City suffers a chimney fire, but it looks like little permanent damage was done.

– Jimmy’s Barbecue in Lexington, North Carolina is closing for good.

– Famous Dave’s is evaluating the performance of their many locations across the country, and have already closed three locations in Virginia.

– Brisket pizza every Tuesday in Dallas:

– From the Charleston City Paper: “But the city’s preeminence as a barbecue leader was solidified in October when Austin, Texas’s brisket baron John Lewis of La Barbecue selected Charleston as his second home.”

– Southern Living introduces us to chicken mull, a traditional barbecue side dish in Georgia.

– This native Texan in Seattle traded his job in IT for one in the pits.

– BBQ worth the drive:

ICYMI: @EatsBeat has a guide on where to eat bbq this holiday weekend. http://t.co/d5L0b5u0bK pic.twitter.com/r0ivl6RQrC

– There’s a movie out called “Barbecue,” but it doesn’t seem to be much about barbecue or any good.

– Thrillist calls Austin, Texas the best city for barbecue in the country.

– A serial meat thief has been apprehended in Austin. They’ll never know just how many briskets he stole from H-E-B.

– A whole new level of tailgating: