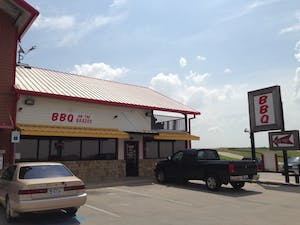 Driving southwest out of Fort Worth along Highway 377 you get out into the country pretty quickly. In just fifteen minutes you’ll be in Cresson which until now was best known for a country club for sports car enthusiasts called Motorsport Ranch. About the only thing between the twisting concrete racetrack and the highway is a Texaco station with a barbecue joint inside. BBQ on the Brazos opened just six months ago, but it’s quickly getting the town of Cresson into the conversations of barbecue searchers. Now a joint that was unknown to most in April can barely cook enough meat to stay open through the lunch hour in July.

Social media has done much for out-of-the-way barbecue joints, wether they’re willing to embrace it or not. Barbecue on the Brazos has the twitter handle of @MeaThisBBQ and it’s been getting tweeted all over since barbecue hounds discovered this joint a few months ago. The popularity has grown so much that you can now find a barbecue trailer sitting in another gas station parking lot just up the road. No word on whether that trailer landed there in hopes that they’d get some business from inexact directions like “Go south into Cresson. It’s a barbecue joint in a gas station on the left.” If it’s not a Texaco, keep driving. You’re almost there.

Inside you’ll find a small counter and a few tables. We watched as meats were sliced and piled onto two different trays. There’s a standard two-meat plate on the menu, but they’ll happily pile on all that they have to offer and charge you by the pound. With two hands on each tray we bypassed the seating and walked up the stairs to another dining area and a balcony that overlooked the race track. The Fort Worth police were honing their driving skills on the day we dined, so our meal also came with some entertainment as we watched car after car screach through a hair-pin turn. 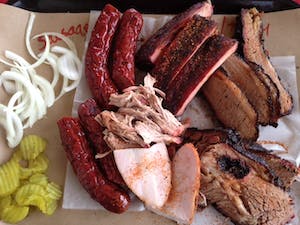 The show next door was a fun bonus, but it’s the food on this tray loaded with astoundingly good barbecue that I’ll come back for. The St. Louis cut ribs towed the line between Texas simplicity and over-seasoned competition style. The middle ground was pork rib perfection. Bite marks through the meat showed the superb texture and the flavors were a well balanced mix of sweet and heat from a rub and subtle glaze and smoke from post oak. A sprinkling of sweet rub over the entire tray just before serving added another level of flavor that was welcome on the ribs, but didn’t work so well with the brisket which needed no adornment. Thick slices from the flat had a thick black crust along the edges, and a solid smokiness all the way through. The fat along the top of the lean slices and coursing throughout the fatty slices was all nicely rendered. The fatty slices were cut too thick to be as tender as the lean, but it was all better than any brisket I’ve had in Fort Worth. It could even hold its own in Austin. 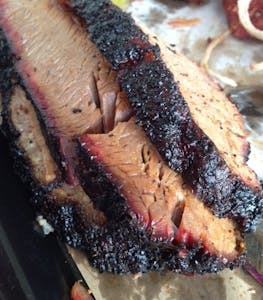 A supporting cast of turkey, pulled pork and sausage were also great, but it’s hard to shine against those brisket and pork ribs. Slices of turkey are moist with a whiff of smoke, and a pork shoulder is pulled fresh for every order to ensure juiciness. The sausage links are made to their specifications by an out of town sausage manufacturer, but a blind-folded Lockhart resident may swear they came from Kreuz Market. They aren’t formed into those signature rings and the casings look shriveled, but they’ve got snap, and so does the filling. The beefiness hits the palate first while the black pepper and cayenne hold out a bit before hitting the back of your throat with a pleasant sting.

The two sides we chose were a mixed bag. A crispy slaw is dressed with what tastes like a mix between a pesto and a chimichurri. We ate it all while trying to peg it. I only needed one bite of the cornbread salad to remind me why stale cornbread crumbs moistened with mayo and sour cream is only a great idea if you’re trying to make a meal out of leftovers. The banana pudding was a blessing to end the meal. Crumbled Nilla wafers topped a pudding fluffed with whipped cream and stuffed with banana slices. It didn’t last long. 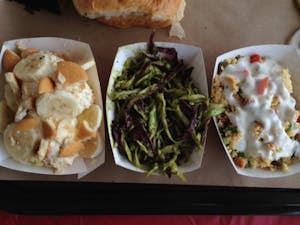 As we left owner and pitmaster John Sanford and Michael Warren obliged us with a look at the smoker. An Ole Hickory was mounted on a trailer so it can be easily dispatched for catering gigs. They only use the gas to start the fire, and said he chose the Ole Hickory over similar Southern Pride smokers. He’d been unhappy with his Southern Pride at his previous joint, Sandford’s Fort Worth Barbecue out near Saginaw. He’s amazed at the response to this little joint which he opened with a mind to keep things slow and easy. Now they’re getting overrun on the weekends by folks from Fort Worth and Dallas. Make the drive, and you won’t be disappointed. It’s a heck of a lot closer than Austin.