Denny Culbert is a freelance food, portrait, and documentary photographer living in Lafayette, Louisiana. Armed with a degree in photojournalism from Ohio University and no prior knowledge of the deep south, he moved to Baton Rouge in 2008 for a job at The Advocate. After a few hurricane and football seasons working for newspapers in Baton Rouge and Lafayette, he made the leap into full time freelance photography. That transition led to an adventure and education in smoke and pork via The Barbecue Bus. His work documenting North and South Carolina barbecue for the Southern Foodways Alliance, with historian Rien Fertel, was the beginning of a career in food documentary photography and an undying love for whole hog cooked over wood coals. More recent barbecue assignments have included documenting Houston barbecue joints for Foodways Texas and a run up to Memphis to spend time with the family running Payne’s Barbecue for Spenser Magazine. 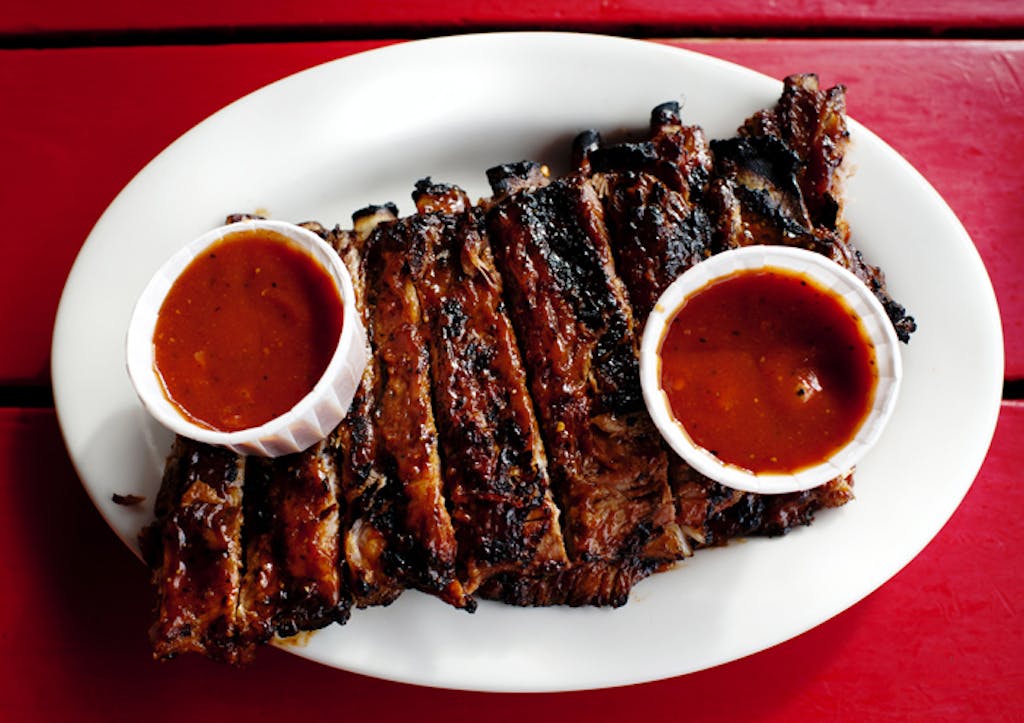 A rack of ribs at Fat Matt’s Rib Shack in Atlanta, Georgia.
Fat Matt’s was not on our list of places to document on the Barbecue Bus,
but it was the first ‘cue we had on the road en route to the Carolinas.
–

Servers wait to meet the crowd of diners on a Sunday morning at Parker’s Bar-B-Q in Wilson, North Carolina. 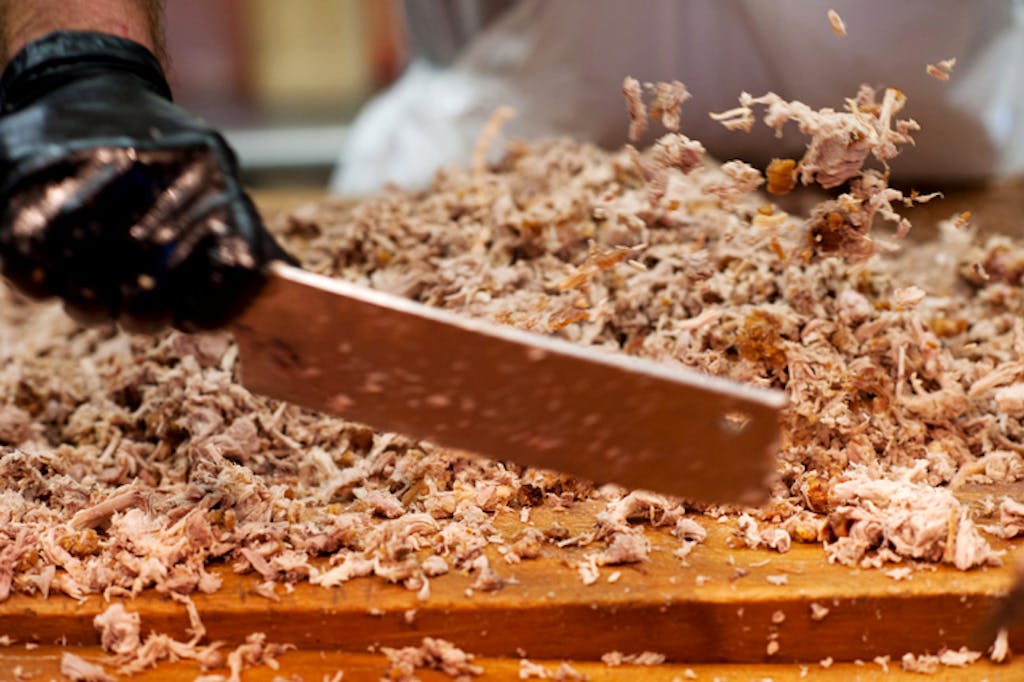 Pork on the chop block at Skylight Inn in Ayden, North Carolina. 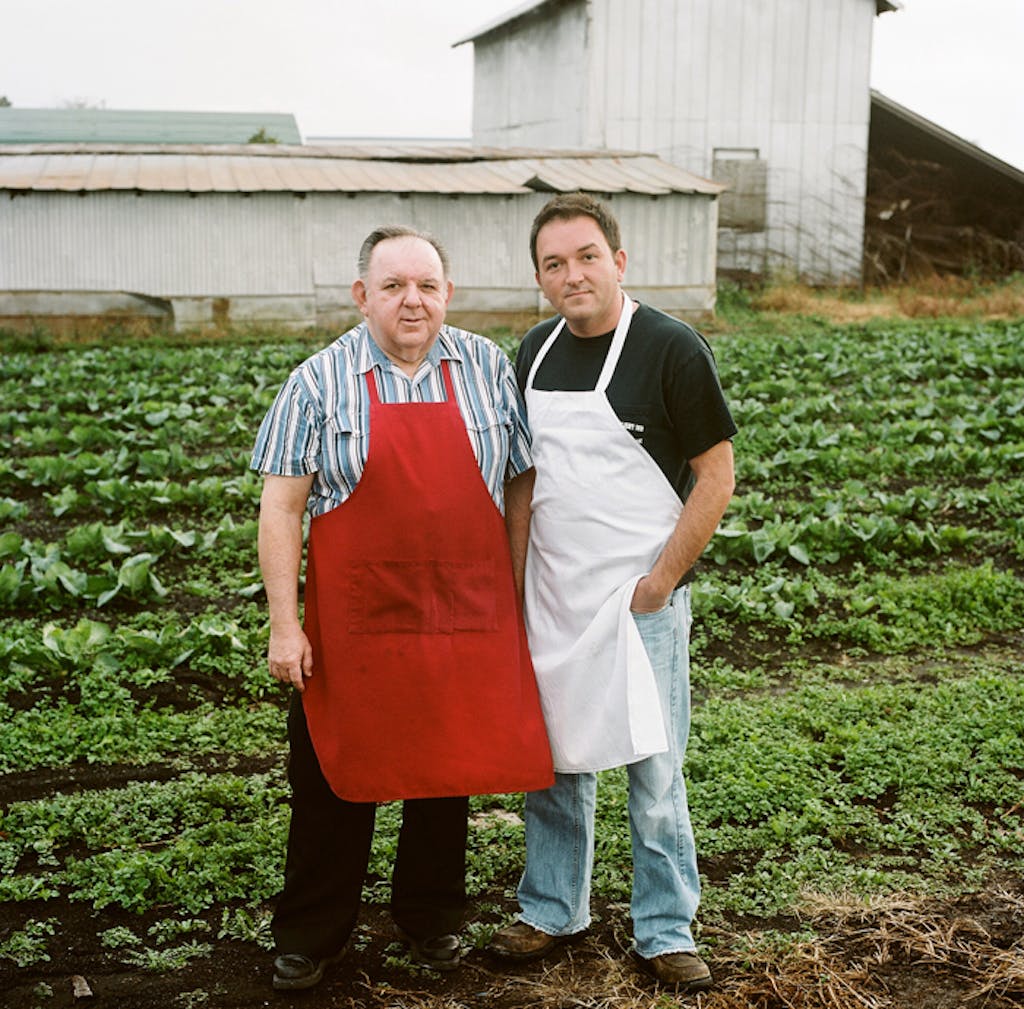 Bruce Jones and his son Samuel Jones provide whole hog barbecue to the residents of
Ayden, North Carolina. Their restaurant the Skylight Inn
has been a staple in the community since 1947.

The famous burn barrel lights up the night at Scott’s Bar-B-Que in Hemingway, Carolina.

A chopped pork and coleslaw sandwich in the dining room at Grady’s Barbecue in
Dudley, North Carolina. Stephen and Gerri Grady opened their barbecue business in 1986,
the same year they were married.

Pit master James Henry Howell moves a pig from the cooler to the pit at Skylight Inn in Ayden, North Carolina.

A full plate from Scott’s Bar-B-Que in Hemingway, Carolina.
Included in the picture are pork skins, coleslaw, baked beans, chopped pork with
Rodney Scott’s secret recipe sauce, and barbecue chicken off to the side.

The pit room at Stamey’s Barbecue in Greensboro, North Carolina.

To view more of Denny Culbert’s work visit www.dennyculbert.com or you can check out more barbecue photos and order prints here.