As the late Josh Ozersky once observed, “The fat is the meat, and the meat is the vegetable.” Fat matters. Without fat, which provides the signature flavor to meat, beef would taste just like pork or lamb or chicken or goat. And anyone who fills their cart with raw steak knows the value of beef fat—prime beef fetches a handsome price compared to lesser grades because of the greater amount of intramuscular fat. But not all fat is created equal.

Wagyu is a breed of Japanese cattle (Kobe beef is the most well-known variety) coveted for its fat. Comparing a Select grade strip steak to a Wagyu version is like pointing out the difference between a dusting of snow and a blizzard. With Wagyu, it’s hard to decide whether it’s a fatty piece of beef or a beefy piece of fat. Although financing might be required when ordering one at a steakhouse, it’s not all about the quantity. The quality of Wagyu fat is also unique.

The melting point of animal fat varies widely between species. Pork fat melts at about 100 degrees, or close to body temperature. The sensation of bacon fat melting on your tongue is not created by skilled cooking, but by biology. Beef bacon doesn’t react the same way. I’ve had many varieties, and no matter how thick or thin it’s cut, the fat on beef bacon is always chewy. With a melting point of about 112 degrees (this is an average since it varies by breed and by type of fat within the steer), beef belly fat doesn’t melt on the tongue and doesn’t crisp up like pork fat.

A Bar N Ranch raises a crossbreed of Wagyu and Angus cattle in North Texas. I was first introduced to their beef while dining at Rapscallion in Dallas, where I shared some excellent dry-aged strip steaks from their herd with friends and some folks from the ranch (we paid full price). I discussed the qualities of Wagyu beef fat with A Bar N Ranch’s head of sales, Katie Allen, and meat manager, Danny Perkins. They promised that beef bellies from their cattle would behave more like pork than conventional beef, and to prove it, Allen sent me a two-pound chunk of their beef belly a few days later. I planned to put their theory to the test. 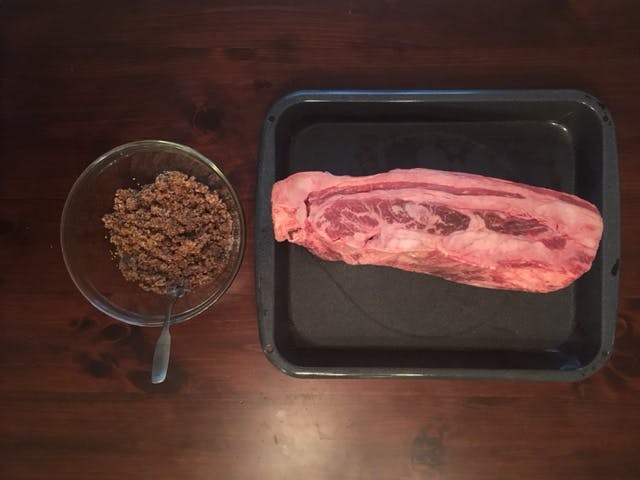 The slab was about six inches thick. I cured it in a dry rub of salt, sodium nitrate, black pepper, brown sugar, and maple syrup—a recipe for pork belly bacon that I found in Michael Ruhlman and Brian Polcyn’s Charcuterie book. I didn’t want to take the chance of it being under-cured, and I didn’t want to introduce sugar into the interior of the meat by injecting it with brine, so it sat in the brine for 10 days.

I badly miscalculated the cook time. My aim was to get it up to 160 degrees internal temperature (because that felt right) with a smoker temperature of around 200. Seven hours later, I took it off the pit, wrapped it in foil, and chilled it overnight. 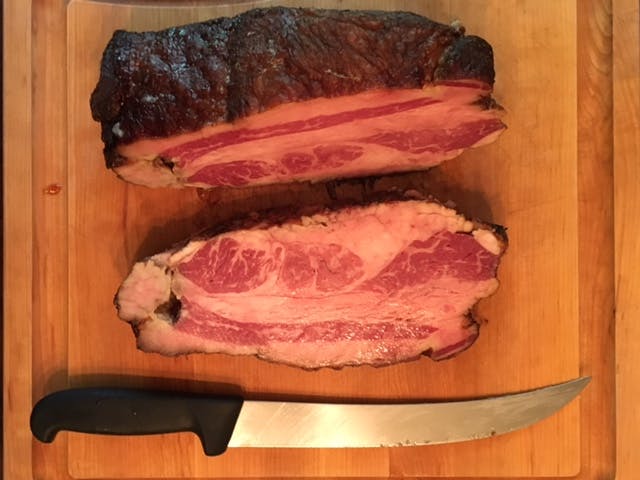 The first few slices I cooked up were a disappointment, but mainly because of my knife skills. I’ll have to wait until next Father’s Day for a deli slicer, but I’ve got Brian Luscher in the meantime. He’s the chef and owner at Luscher’s Red Hots in Dallas, and we have a mutual love for beef fat. We used the deli slicer in his kitchen to find the perfect thickness for beef belly bacon. That, of course, required plenty of beef bacon consumption, and after a dozen or so slices it was obvious that the thinnest slice that could remain intact was best. We threw a couple in the deep fryer where the beef belly bacon shriveled into a ball, and fried many more slices on the flat top. The ones were cooked under a cast-iron griddle press. 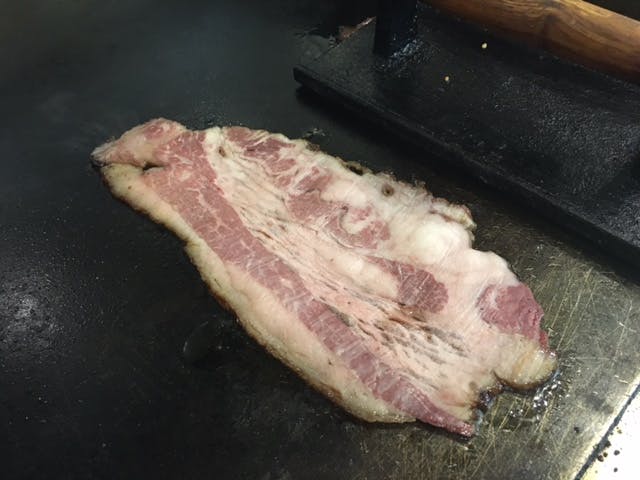 Luscher and I enjoyed one of his famous Uncle Herky burgers topped with beef bacon. The patties had been fried in the rendered beef bacon fat. It was also Tuesday, also known as beef-tallow-fry day at Luscher’s Red Hots, so we added a side of beef-tallow fried onion rings. (Ron Swanson would have been proud.) It was a great burger, but we both agreed that beef-on-beef wasn’t the best use for this bacon. It gets lost in there like chocolate chips in a chocolate brownie. The beef bacon needed to be the star.

Luscher sliced the remaining beef belly bacon and sent me on my way. With my heart barely recovered from the previous day’s lunch, I set out the next day to make a BeefLT. The cold fat began to melt just sitting next to the frying pan. It doubled as hand moisturizer as I laid slice after slice in my cast iron pan. There’s so much fat that melts out of a beef belly, the cut just below the beef plate short ribs, that it took eight slices for a proper sandwich.

The anticipation was rewarded with the first bite. Hot, crisp bacon shattered as I bit through the many layers. There was none of the dreaded meat dangle that comes as tough meat pulls away from a sandwich, like chewy fajita meat prematurely liberated from a tortilla. It simply tasted like a beefier version of bacon. Thanks to some Wagyu bloodlines, I had cracked the code on beef belly bacon.