With this week being Sides Week on TMBBQ, we wanted to highlight some of our favorite sides that aren’t always in the Texas barbecue spotlight. Every joint serves slaw, beans, and potato salad, but not all of them have a fryer. That’s why it feels like a special occasion when onion rings or hand cut fries are on the menu.  With confident pretension, I often ask of the fried okra, “is it hand-breaded?” There’s only so much you can expect from the frozen stuff.

This ranking is heavy on onion rings (my favorite side item) and okra, with a few surprises. We considered fried, brisket-stuffed jalapeños to be more of an appetizer than a side. There was also some arbitration over Twitter about the inclusion of the tater tot casserole at Opie’s, but we’ve ruled it a baked item. To make it on the list, the item had to be fried as a final step. So, fresh from the grease, here are the 21 best fried sides at Texas barbecue joints. 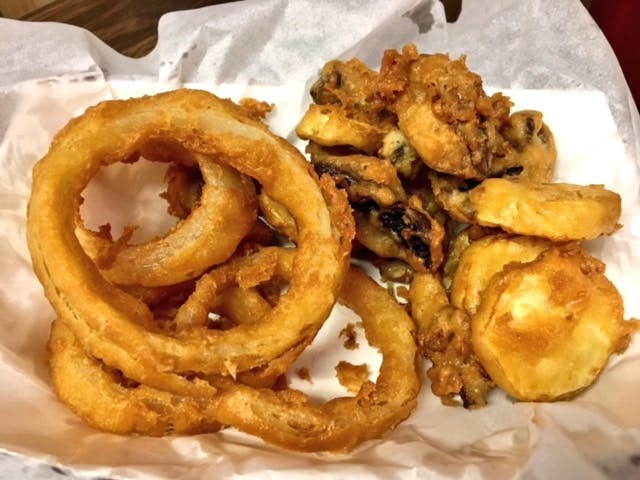 They serve all three of these gloriously battered items, mushrooms, onion rings, and squash, as a separate side, but I asked nicely if they could combine them. It was my second of three stops on the day, but I found a way to eat every bite. The mushrooms and onion rings alone would be a contender for the top spot, but take them together and it’s a landslide. 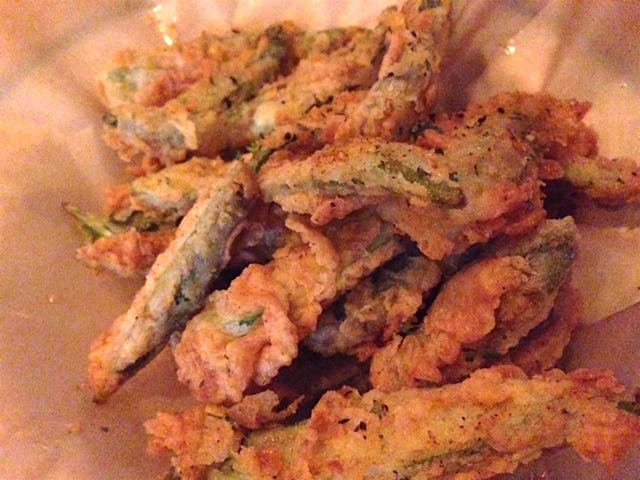 The unorthodox lengthwise cut makes for fried spears of okra, and they’re fantastic. 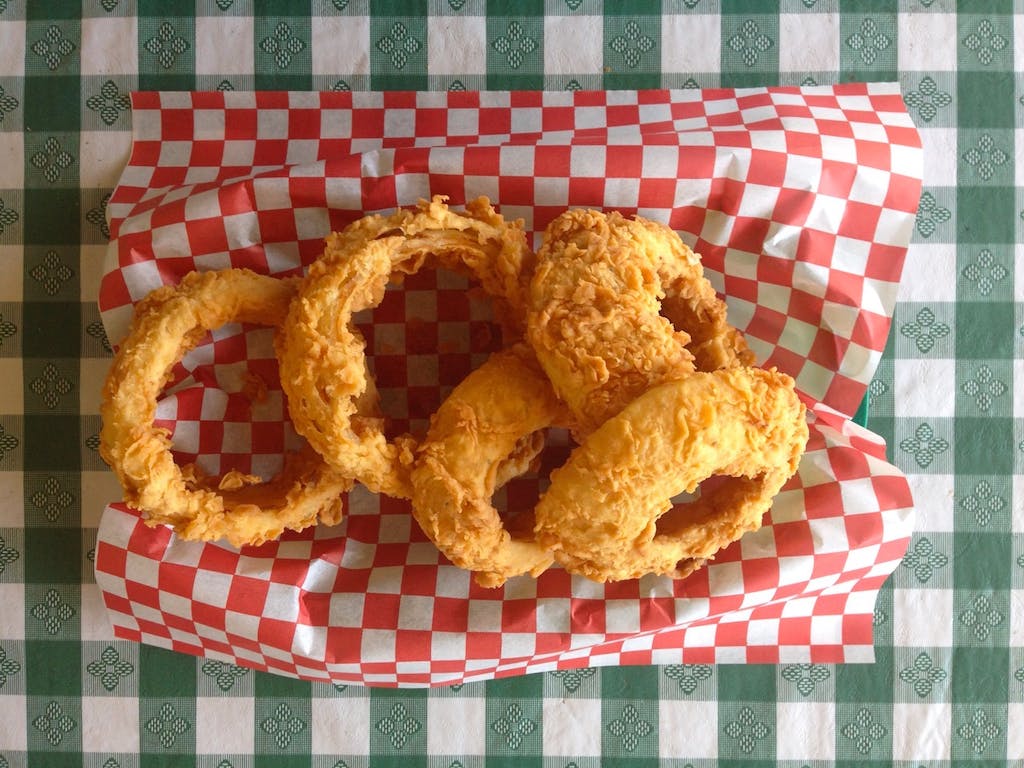 This joint is among the Texas Monthly Top 50, and their fryer game is strong. They make the most beautiful, golden bracelets of fried onions in Texas.

4. Fried Corn on the Cob – Off The Bone Barbeque in Dallas 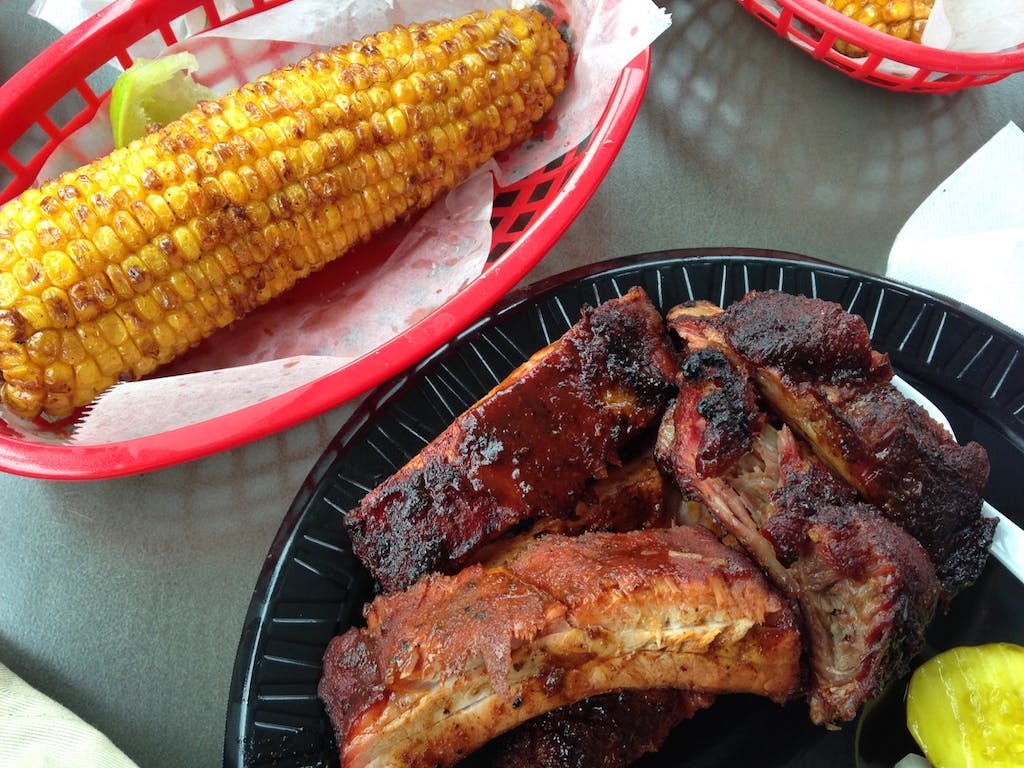 Whole cobs are dipped naked into the fryer, then seasoned with some salt and spice. Add a squeeze of lime and it’s perfect. 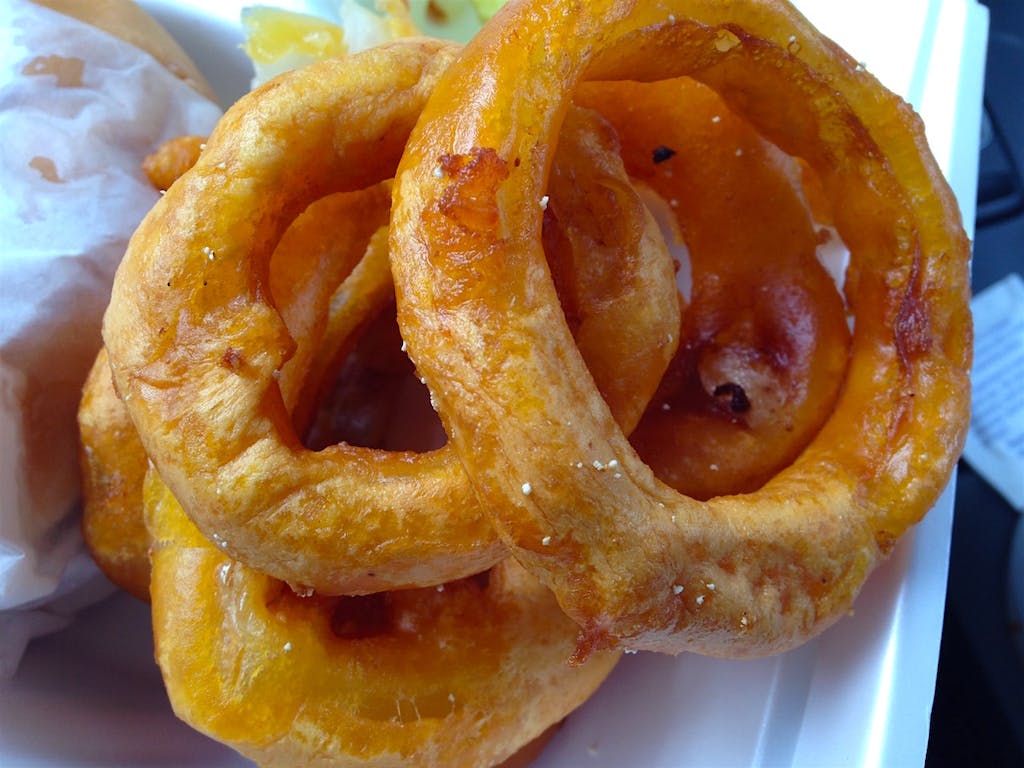 Battered onion rings are a signature of Panhandle barbecue joints, and these are some of the best. 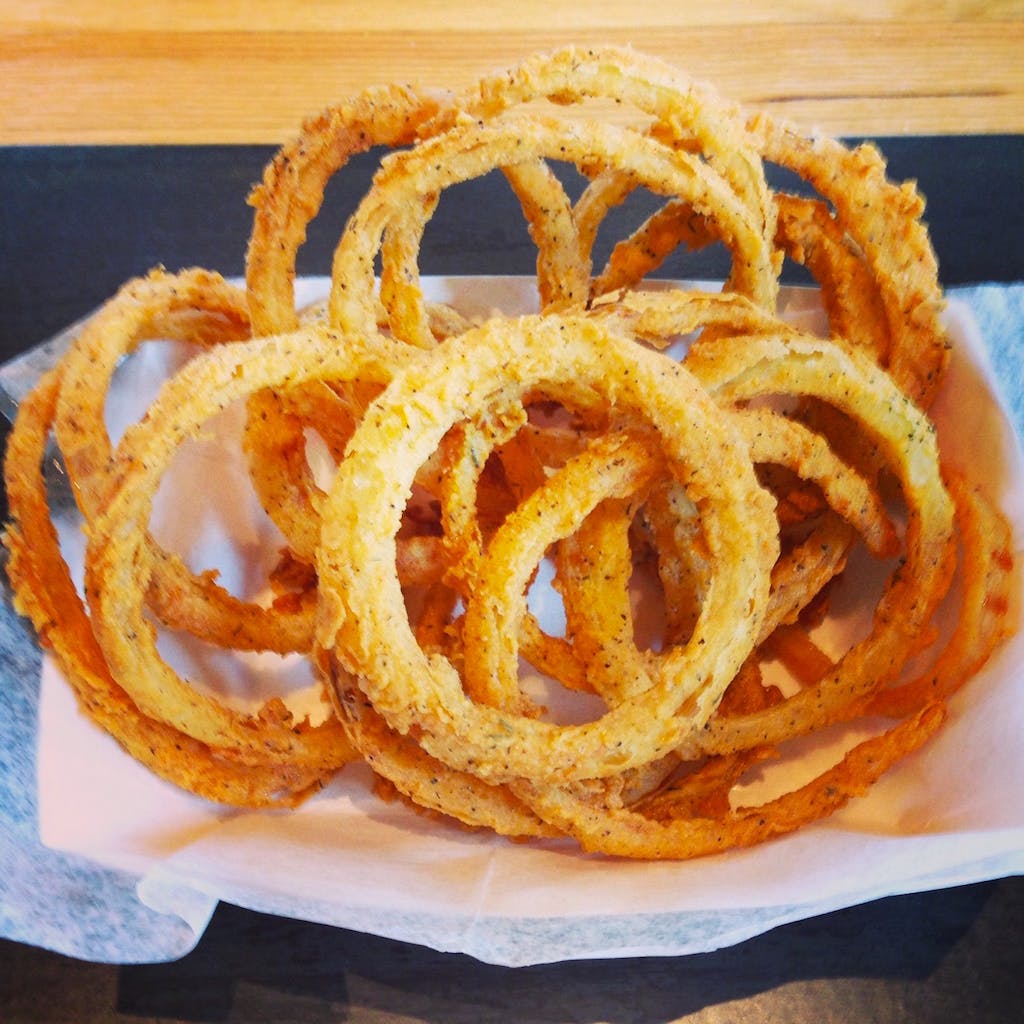 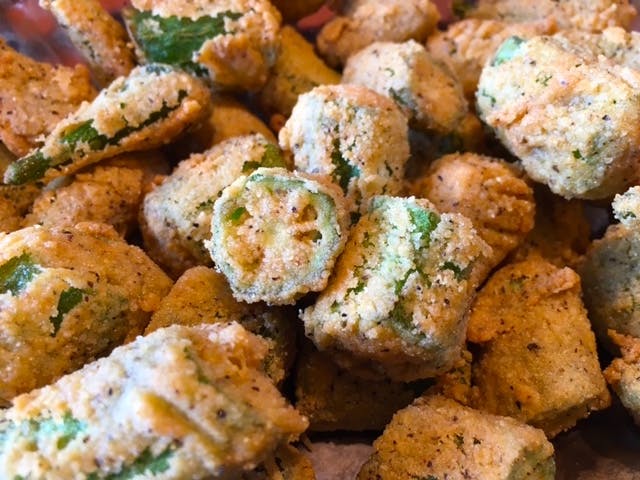 This duo is dangerous because it’s hard to just order one. Then again, one of them is a green vegetable, and those are supposed to be healthy. 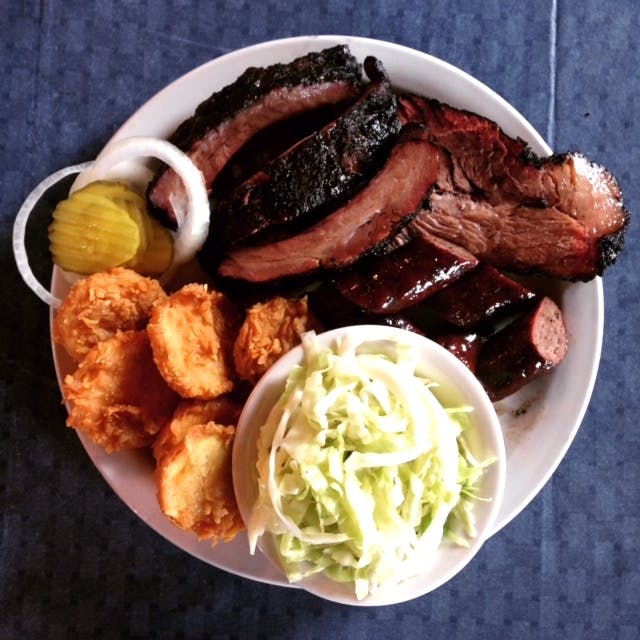 The fried discs of squash are great, but even better dipped into the house made ranch dressing.

8. Potato Chips and Chicharrones – The Pit Room in Houston 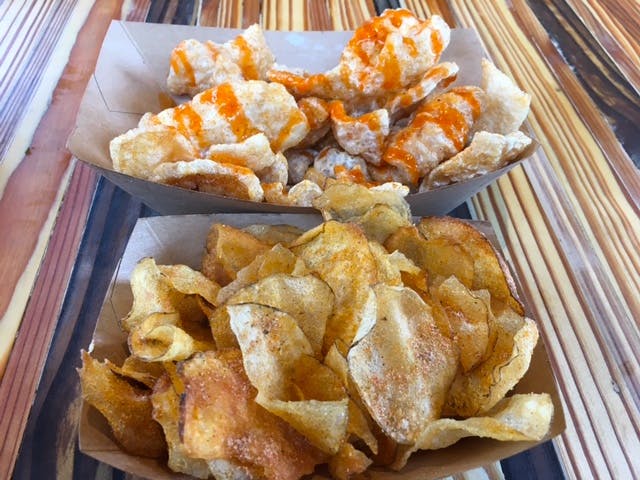 These ain’t no pre-made chicharrones. They’re fried fresh and covered in hot sauce. The chips are also made in house and dusted with vinegar and jalapeño powder. 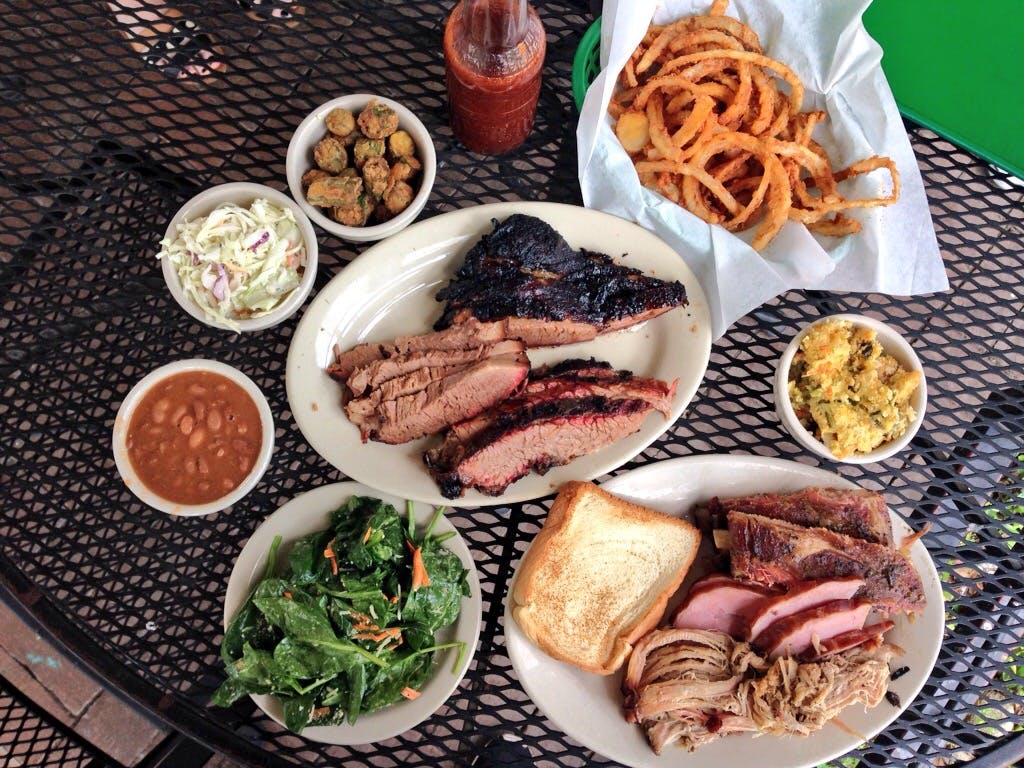 The onion strings are great here, but I prefer the fried okra. You’ll find the tips and the stems in the mix, so you know they didn’t come from a freezer bag. 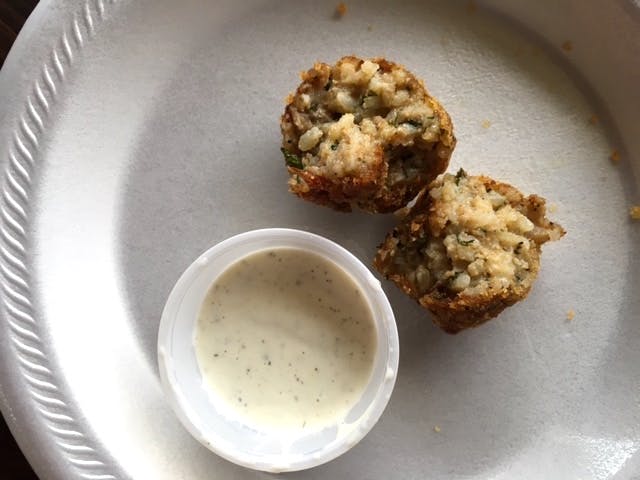 They run these as a special at the this southeast Texas joint for just $1 a piece. The house made ranch is free, and highly recommended. 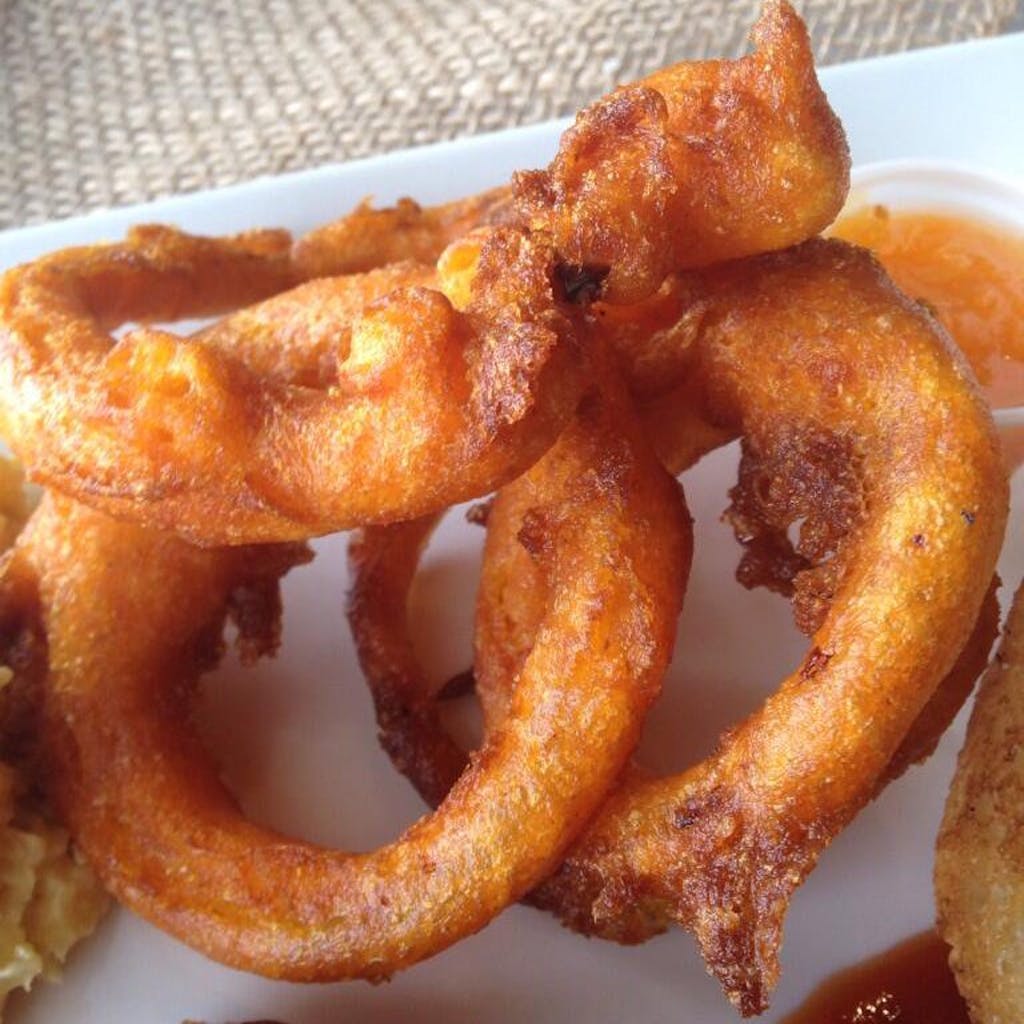 The batter is fluffy and a little sweet. They’re also strangely orange, but plenty addictive. 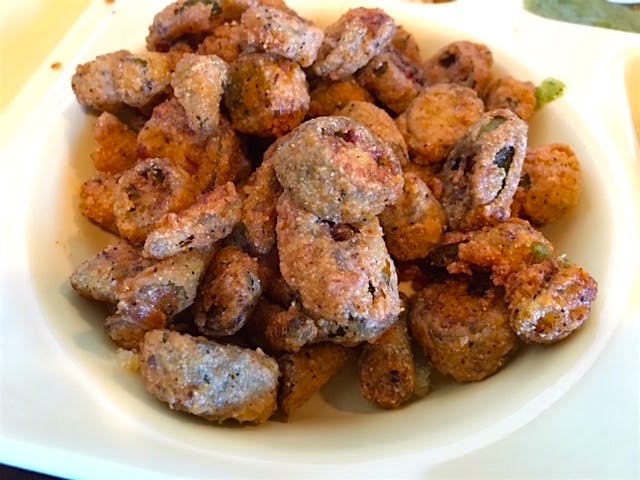 Slow Bone might have the best sides in Texas, and these fresh nuggets of salty, fried okra are one good reason why. Their tater tots are also quite good, especially covered in brisket chili and cheese.

13. Fried Corn on the Cob – Ray’s BBQ Shack in Houston 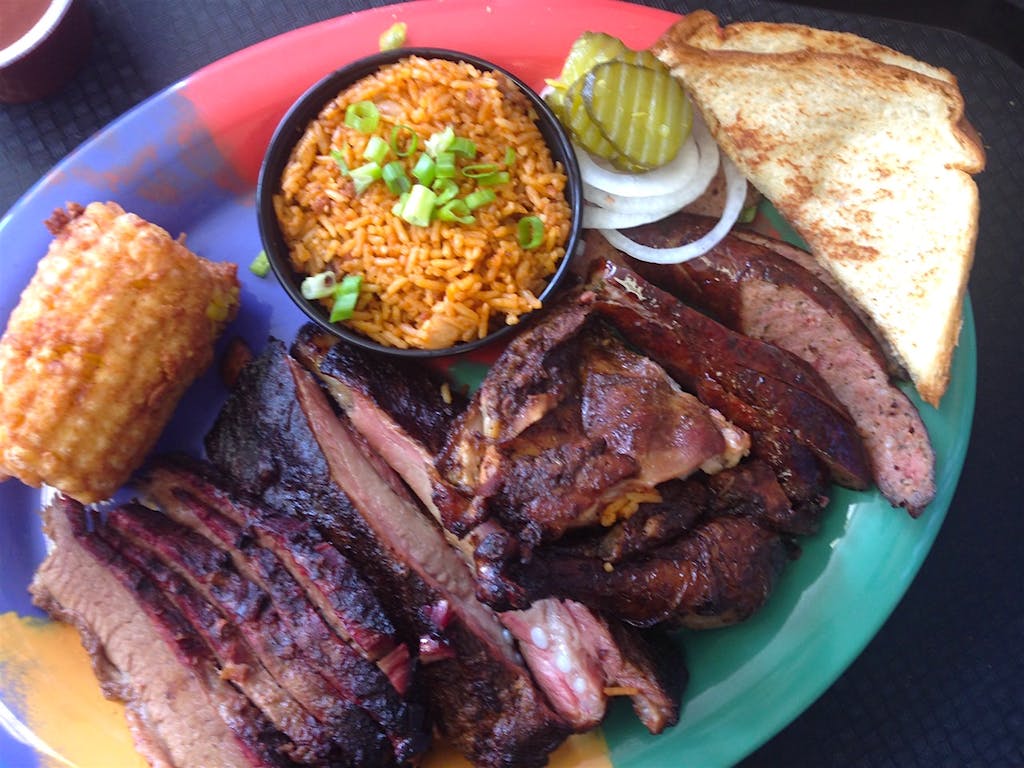 A bit of batter keeps these kernels from becoming mush, and let’s the seasoning stick on. 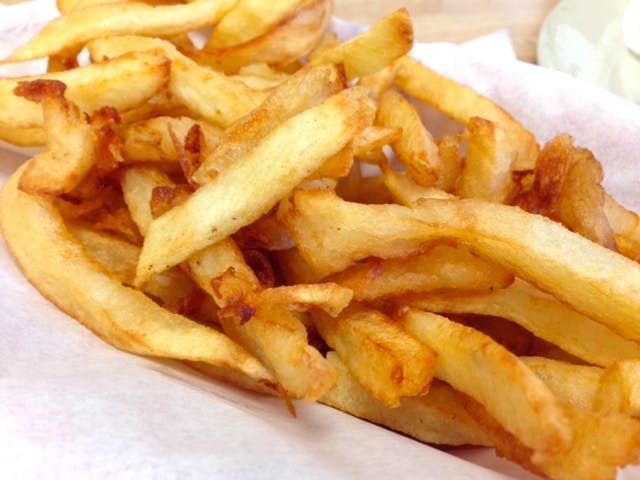 These are some of my favorite fries, and not just in a barbecue joint. They’re double fried with a long rest period in between, and they’re super crisp. 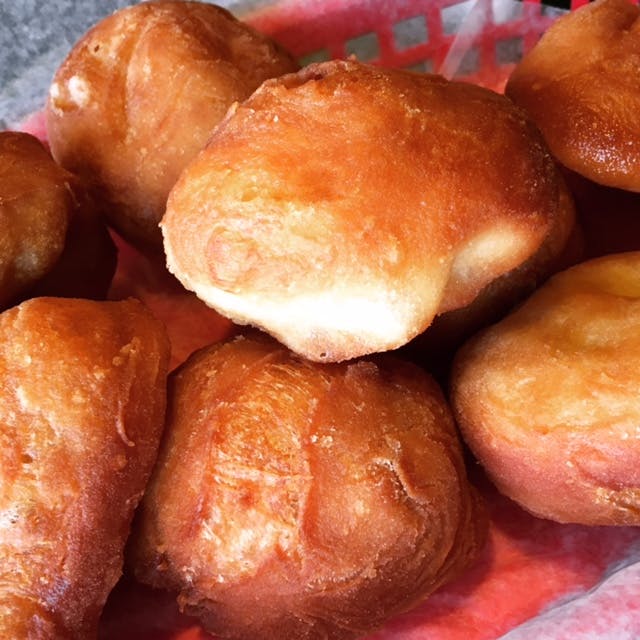 Raw dough goes right into the fryer and comes out as possibly the unhealthiest carb in a Texas barbecue joint. 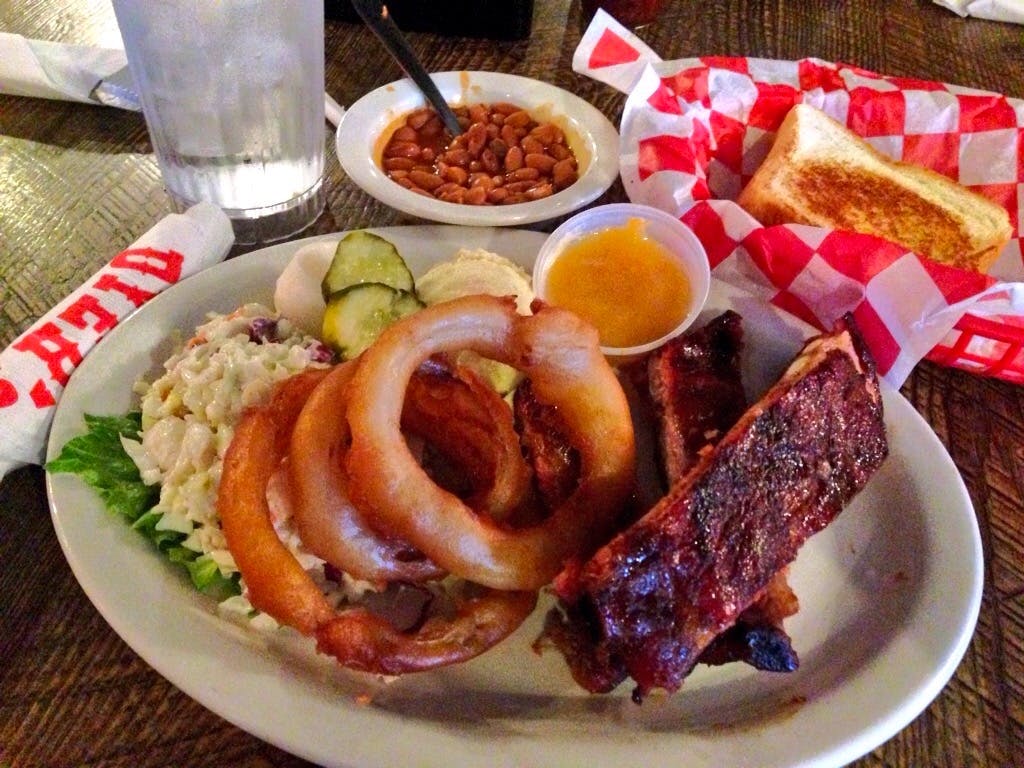 Ribs and rigs are the most popular order here, and the two best times they serve. 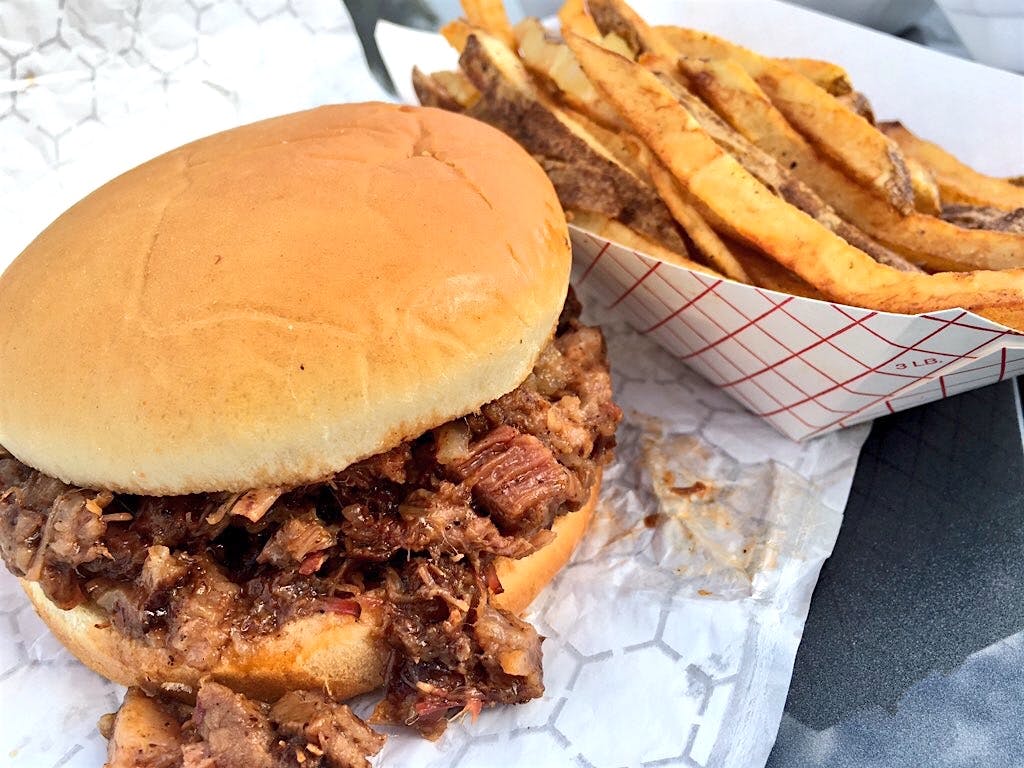 These hand-cut and double fried french fries are the perfect complement for a chopped beef sandwich. 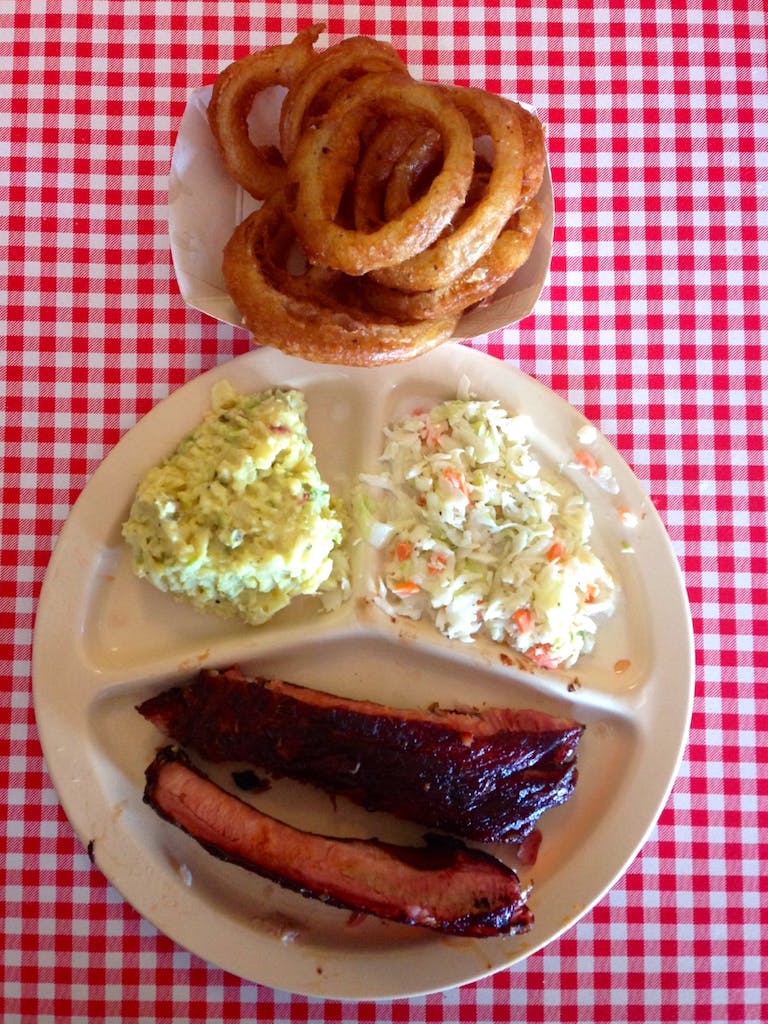 This generous serving of rings is best enjoyed with a dunk in David’s barbecue sauce. 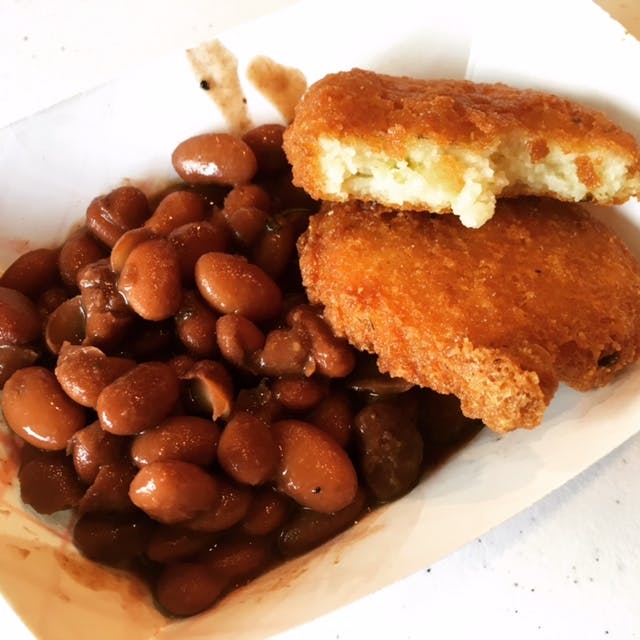 Stephen Joseph fries his hot water cornbread. It makes a filling snack alongside a bowl of pinto beans. 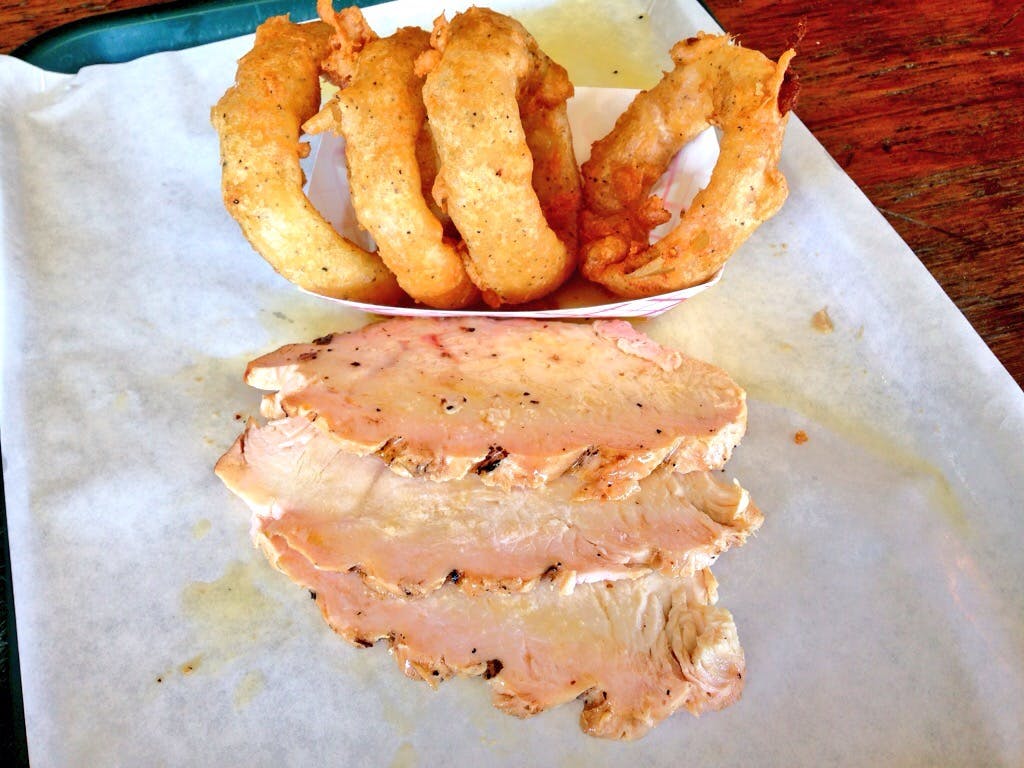 These enormous rings are fired up and kept under a heat lamp along the ordering line. Remarkably, they’re still hot, crisp, and delicious. 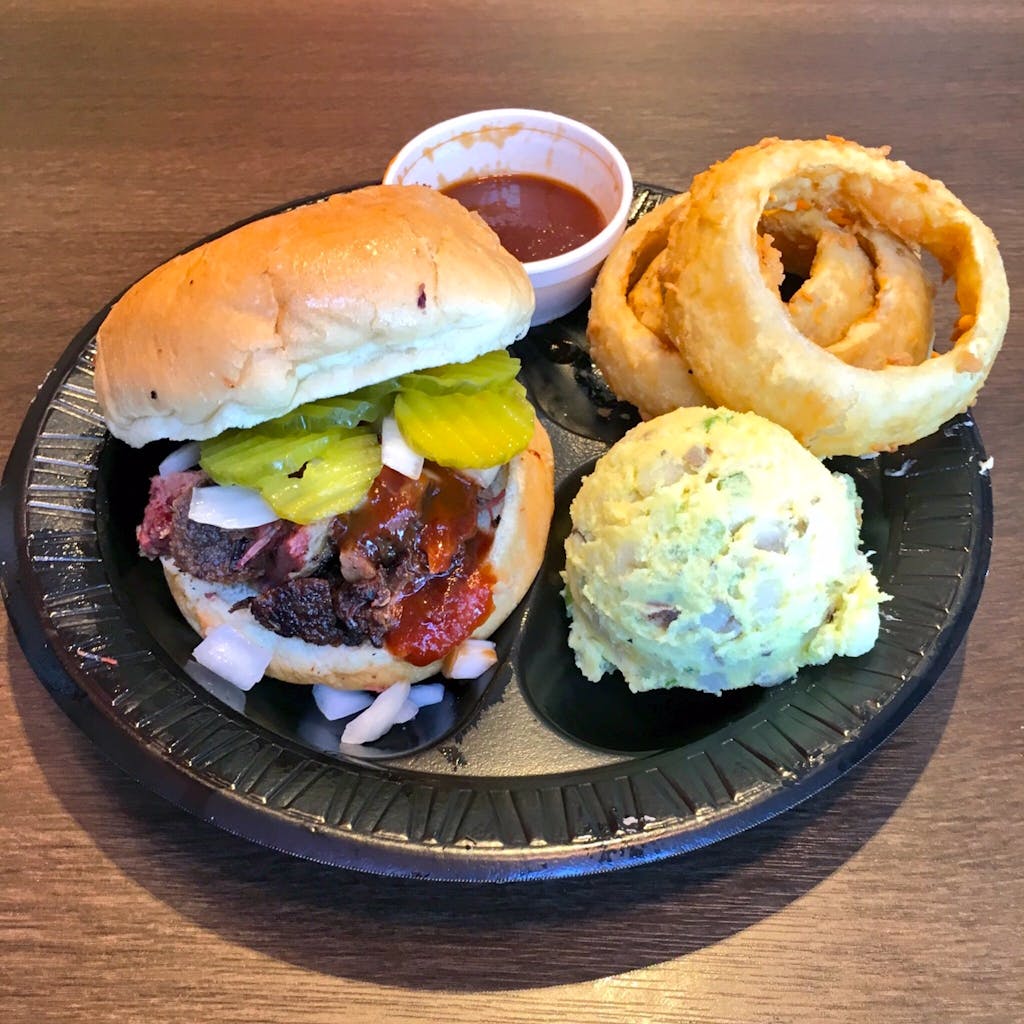 Sonny Bryan’s might be as famous for the rings as their brisket. They’re huge at every location (and great even at DFW Airport, as shown above), and they give you three big ones as a side option. That’s always a better call than slaw.