Big Al’s Smokehouse Barbecue has been smoking meats in Dallas for forty years. I recently sat down with owner Al Plaskoff to discuss a little Dallas barbecue history, and to learn where Big Al’s fits into the local story. It’s quite a legacy. There aren’t many restaurants of any type that last forty years, let along a barbecue joint in Dallas. For the first 39-1/2 years of that lifespan they’d been cooking their briskets completely untrimmed, then cutting the fat and crust off before serving. All of that flavor went in the trash. Now they’re doing things differently. While we talked they brought out a beautiful plate of sliced brisket with a nice line of fat and a good bark. The meat was moist and perfectly tender. Now they trim off all but a thin layer of fat, then leave it all on when the meat is sliced. It was superb, but would it be that good during a normal lunch rush?

I went back again on a Tuesday. That’s rib basket special day, and I almost ordered one instinctually. I’ve been eating the ribs here for years, but I never was a fan of the brisket. I was hoping that would change today. Pedro, who started at Big Al’s in 1979, has been cooking and slicing meat here for as long as I’ve been coming. He is the face that greets the customers as they make their way, red trays in hand, to the cutting block. He cut off three good looking ribs and a few less-than-promising slices of brisket. I added a scoop each of serviceable versions of potato salad and cole slaw.

This brisket was better than what I was used to getting from Big Al’s in the past, but it wasn’t close to the great stuff I’d had just days earlier. Big Al walked by my table mid-meal. He looked at my plate, mumbled a few words and shook his head. He knew it wasn’t up to their new standard and promised to do better next time. The ribs, I assured him, were fantastic. They’re a bit on the thin side with a well-developed bark and sweet glaze. The meat comes off the bone in satisfying chunks, and all three bones were clean before I remembered the chopped beef sandwich.

Big Al’s offers two options for chopped beef. You can get it from a small warming drawer that’s next to the block. This is the brisket trimmings and leftover bits that are chopped finely then mixed with brisket drippings. It’s a smokier and more intense version of a sloppy joe with a warm, buttered, squishy bun. I liked the flavor, but I missed the textural variation that chopping meat on the block gives you.

Luckily, Pedro is just as happy to chop brisket right there on the block for your sandwich. This version still had the intensity of smoke, but also distinct bits of fat and slightly chewy bark that makes for a great bite of chopped beef. That’s the way I’d order it again.

After two visits with big variations in brisket quality, I needed to go back for the tie-breaker. This time I asked for some thick fatty brisket slices. I added some smoked sausage that comes from the local Rudolph’s Market and a fat, fluffy baked potato; loaded. 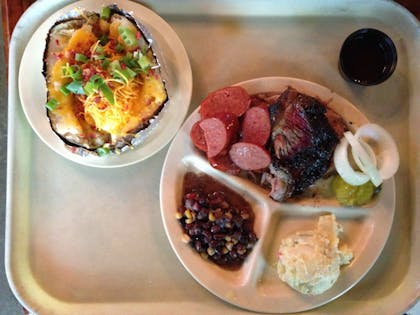 The brisket was a big improvement over that last visit. The meat was tender, and the fat was rendered. The well-formed bark made for good smoky bites and plenty of fat left on each slice provided a silky texture. This was brisket worth coming back for.

While I can’t guarantee which version of the brisket you’ll get, I do know their high side is very good. You’ve got to expect a few hiccups when a joint decides to change things up this late in life, but I admire their charge toward excellence. Once they get their brisket consistency down, Big Al’s could be one of the better joints in the state. Until then, make sure to get a few ribs with your order.