Today Wayne Mueller begins the final leg of his around-the-world barbecue missionary tour, a journey that has taken him to Japan (through Tokyo and three other cities); a stint at the World Expo in Milan; two flights through London, and one very long weekend in New York City at the Big Apple BBQ Block Party. His final sojourn will have Mueller hauling a barbecue pit the long way back to Texas through Atlanta to bypass the mountains, and get back to his restaurant for a much needed staff reunion.

So how is he feeling? “It was a ball-buster,” he told me over the phone earlier this week after making final preparations in the Big Apple for the trip home. He stayed over a few days after the Big Apple BBQ Block Party to take in some sites with his daughter and decompress after the most grueling cook of his life.

“It was more intense than I could have ever imagined it to be,” Mueller said of his rookie year at the Big Apple BBQ Block Party. He’d seen the crowds and helped serve food with 17th St. BBQ, another tent at the festival, the two years prior, but it wasn’t his name on the banner until this year. Louie Mueller’s famous beef ribs were on the menu, for which Mueller smoked a thousand racks of beef ribs, or 500 steers worth, for the two-day event that began last Saturday. Knowing he couldn’t smoke them all at once the night before, he started cooking the ribs on Wednesday. They were par-smoked to about 70-percent doneness before getting chilled, then he finished them off the morning before the event.

That par-smoking process was no easy feat. It began when Mueller unhitched his smoker at Hometown Bar-B-Que in Red Hook, Brooklyn, home to his protegé Billy Durney, who also made an appearance at the block party. (In deference to Mueller’s reputation for beef ribs, Durney was serving pork spare ribs instead of his beef ribs that were so popular last year.) Durney graciously turned over much of his own pits’ space to help Mueller with his massive cook, loading down every smoker in Durney’s fleet. The seven pits were belching smoke at full bore, and all was going as planned until the fire department arrived in the middle of the night. “Make that two fire departments getting called out. They were coming to shut it down,” Mueller remembered, still deflated by what came next. They were forced to move the operation to a remote parking lot, but only three of the seven pits were mobile. Mueller’s cooking capacity was at less than half of what he’d planned. “We now had a fraction of the pits that we were going to use which meant literally around the clock cooking. Knowing that you’re going to have to stay up all night for several nights just to get enough product out is just physically and mentally taxing.” 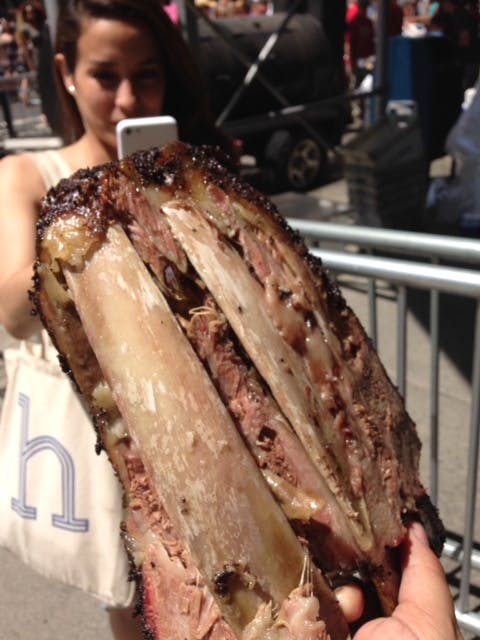 Mueller also knew he had a put a strain on his host’s resources, but never his good will. “[Billy Durney’s] been a consummate host. I can’t speak highly enough of him, and Barry Sorkin at Smoque in Chicago – if I didn’t have that cat – he was right there the whole time. Without the two of them, this would simply not have happened.” This was the best of Mueller’s barbecue family coming together. He even had some Texans along for the ride. Of course he brought Illie Medina from the restaurant in Taylor, plus Jonathan Shaw and Nick Pencis of Stanley’s Famous Pit Bar-B-Que in Tyler, who helped run the service counter during the festival. I don’t think I saw Shaw without a knife in his hand, slicing those two ounce portions of beef rib. Even with the pickled veggies, that portion wasn’t cheap at $12, and Mueller is well aware. “We were the most expensive item and had the smallest portion,” which he attributes to some of the slower-than-expected traffic at his booth. 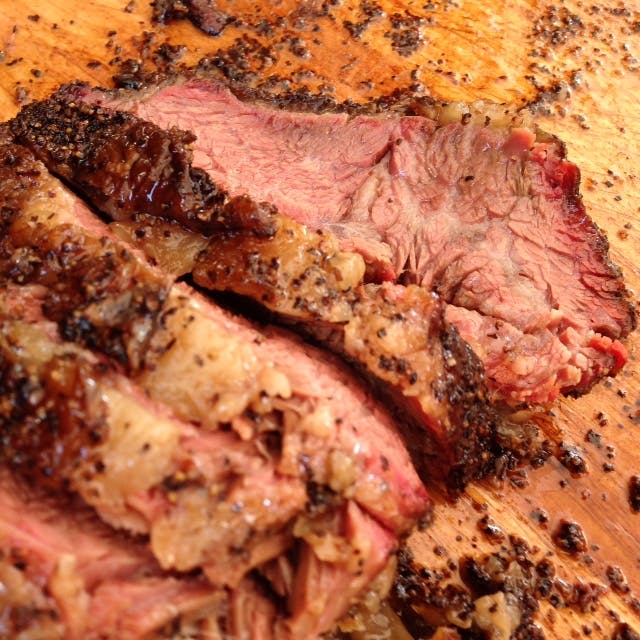 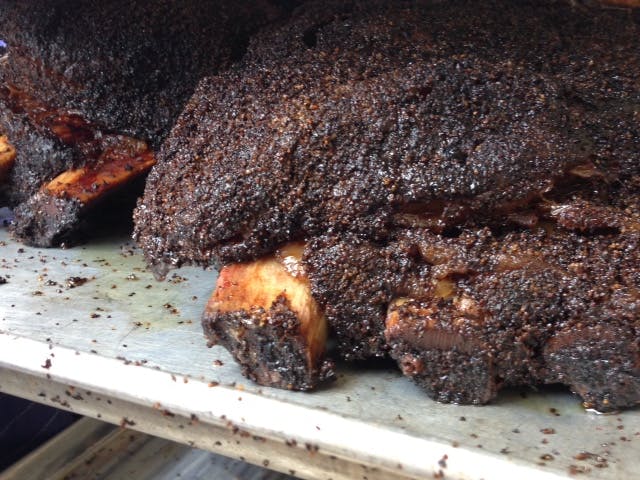 Portions sizes and prices were strictly controlled by a new management company. C3 who runs Food & Wine events across the country purchased the Big Apple BBQ Block Party last year. This was their first year of sole control. The founder of the festival, Danny Meyer of Union Square Hospitality Group (USHG) had been the face of the event since its inception thirteen years ago. He built it from an attendance of 5,000 the first year to over 100,000 in recent years. After the sale, it’s now in the reins of Fort Worth chef Tim Love, who brought his operations team and a load of lamb brisket to the party. When I ran into him at least year’s festival, the first thing he told me was that the lines were too long and he was going to fix that in 2015. He said something about a magic number of eleven minutes in line, but this year the wait for most of the barbecue joints was zero.

It didn’t take much number crunching to see that attendance was down this year. It replaced the weather as the subject for idle chat from one pitmaster to the next. Seventeen pitmasters attended, and in years past nearly all of them would sell out of food on both days. This year it was just Pappy’s from St. Louis, Big Bob Gibson Bar-B-Q from Alabama, and the Salt Lick in Driftwood, Texas, that all saw steady lines and sold out signs. The rest were left wondering what had changed. There were plenty of theories on what was to blame, but it wasn’t the blue skies. The popular Fast Pass had been discontinued. It was a pre-purchased card loaded with barbecue cash, sales of which nearly eliminated the no-show factor. Then there were all those cash registers – eight per booth as compared to two in previous years – eliminating most of the lines before they could even think about forming.

As odd as it sounds, people line up where there’s a line. An unfamiliar customer passing up and down the street seeing empty booths might easily assume that a barbecue joint is unpopular in the same way that a tourist in Paris is more apt to stop into the restaurant with the full patio. “I think C3 was dead on in trying to get as many people through as possible, I just think they over-accomplished that goal,” Mueller told me, and reps for C3 agreed after looking back at the weekend. Samantha Pogue who has worked for both C3 and USHG on the Big Apple BBQ was happy that they’d accomplished their goal of eliminating the crushing lines from years past, and as someone that stood in some of those lines, they could get ridiculous. But Pogue also allowed that the pendulum may have swung too far. In fairness, this was their first year at the helm, and we’ll have to wait to see what other adjustments in 2016 bear out. 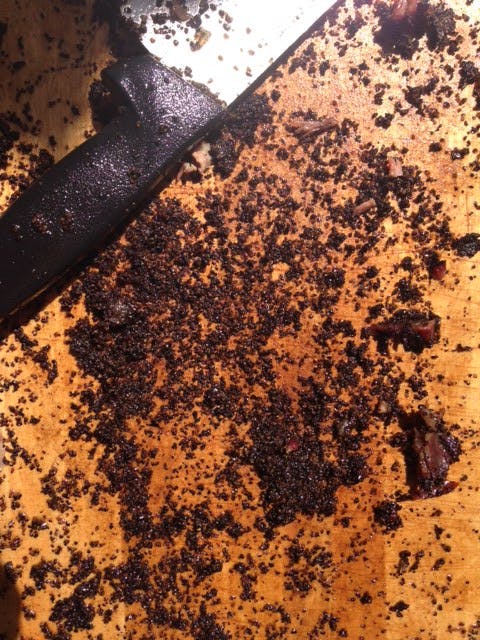 The lower traffic also meant that there was plenty of barbecue left over. Samuel Jones of Skylight Inn had two hogs more than he needed both days. I watched an exasperated Pat Martin take three hogs off his custom designed rig at closing time on Saturday evening to make room for the next day’s cook. Mike Mills of 17th St. BBQ said he sold less than the year before, which was a first for him. Wayne Mueller was left with about 100 racks of beef ribs on Sunday afternoon. Reps from C3 said what could be salvaged was chilled and stored to be sent to needy shelters.

The changes certainly weren’t all bad. Durney said that “operationally, it has never run smoother.” Mueller echoed that sentiment saying he was impressed with how smoothy the event was run. I asked him about the probability of Louie Mueller being back at the Big Apple BBQ in 2016. “Oh, yeah. I look forward to coming back.” But he might choose another protein. “Doing beef ribs doesn’t seem to be viable for next year.” He’d prefer getting a little sleep next year. “I would do something that would require a shorter cook time.”