A couple years ago, I wrote about how barbecue around the country was starting to look the same. There was a certain aesthetic that permeated the upstart barbecue joints in Texas, the rest of the U.S., and even the international scene. At the time I was a little hung up on the look and not what was on those butcher paper-lined quarter sheet pans, but a new style of barbecue was also emerging. I call it “big city barbecue.”

The foundation of big city barbecue is a focus on premium quality meats, such as prime grade beef from boutique brands like Creekstone and 44 Farms. There’s a reverence toward slices of fatty brisket served without sauce. A big city meat cutter might cringe at the idea of chopping their beautiful briskets, looking down on the staple of Texas barbecue that is the chopped beef sandwich. The ribs and pulled pork (and trust me, there will be pulled pork) will likely be identified by breeds like Duroc or Berkshire. Its hard to make a decent profit, even when charging $20 per pound for that prime—or in some cases Akaushi (also known as Texas Wagyu)—brisket, so the menus are diversified with cheaper items like pork shoulder and turkey breast. You won’t find big city barbecue joint that’s a single meat specialist.

The cost of the meat gets to another point about big city barbecue joints: they’re more expensive. Yes, the rent is higher in Houston and Dallas than in Lockhart, and the labor is probably more expensive too, but that alone doesn’t explain the higher prices. I’d argue that this type of barbecue joint is located within cities because the wealthier customer base can support it. Once customers get to the front of the line at Killen’s in Pearland or Hometown Bar-B-Que in Brooklyn, I doubt most even look at the price of the beef rib before ordering a one-and-a-half pound chunk of it. But patrons would laugh at you for charging $20 a pound for brisket in Windthorst, and they’d never darken your door again. That’s why Zeke’s BBQ, Windthorst’s local joint, uses select briskets and charges $13.95 a pound.

The meat at a big city barbecue joint it also going to be tender. Pull-apart beef ribs and lusciously tender brisket are musts. But of the meats at a big city barbecue joint, the beef rib is the calling card. Huge beef ribs are a specimen that’s worth boasting about on social media. It might not be great for profits, but it creates a reason to share your experience—which is ultimately good for marketing, and big city barbecue joints know how to market their restaurant. They don’t have the luxury of a old-time rural joints that pride themselves in not having a website let alone a Facebook page or Twitter account. A big city barbecue place will have them all, and maybe an Instagram account to boot. They’ve gotta connect with folks who won’t blink at a $40 beef rib. 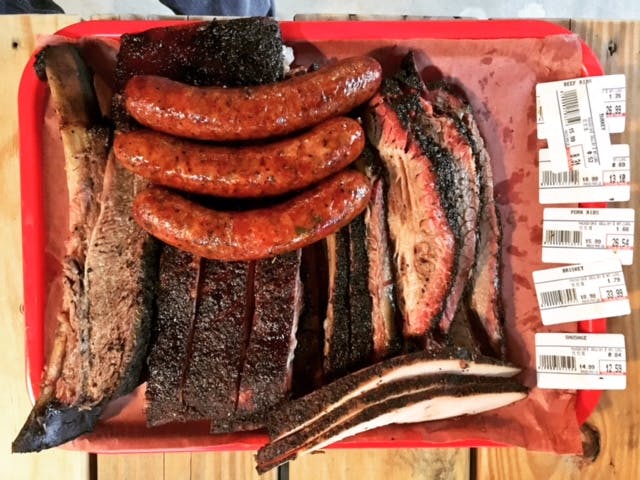 Big city barbecue places are also a bigger time investment for patrons. Potential customers will need some freedom to take long lunch hours or maybe even take the whole morning off. These are places where it’s hard to be a customer if you have a normal nine-to-five job, and even harder to be a regular. That means creating a community among the customers is hard, which is why I think so many traditionalists bristle at the idea of standing in line for hours at Franklin Barbecue rather than sitting across from a friend for an hour over a rack of baby backs at Iron Works down the street.

Tim Mikeska of the famous Mikeska barbecue family does believe that there is some link between these new joints and old traditions. But it’s still undeniably hipster. “This retro-hipster movement in barbecue has caused a totally different epiphany of barbecue in Texas,” Mikeska said. “The reason I call it retro is when I sat down at Aaron’s [of Austin’s Franklin Barbecue] trailer all those years ago and ate that brisket, it was the same brisket we did in the sixties. It was what I call full-term brisket.”

Mikeska is not the first to refer to it as hipster barbecue. Houston-based food writer Robb Walsh got a little more specific. “To be snarky and glib, it’s urban hipster barbecue,” he told me in an interview several months ago. “The question becomes, is the new breed, the stand-in-line places, a new category?”

Some might call it craft barbecue, but I’d say that shows a lack of respect to seasoned rural pitmasters who helped solidify the craft of Texas barbecue. Vencil Mares at Taylor Cafe is no less a craftsman than the next pitmaster or chef to open an urban spot in with an angel investor.

But many food writers outside of Texas refer to this barbecue experience as Central Texas style. Walsh disagrees with that label. “Maybe they’re a sub-category of Central Texas barbecue,” he said, adding, “Let’s face it. Central Texas barbecue doesn’t have any side dishes.” I hinted at this style in my write-up of Lewis Barbecue in Charleston, South Carolina, where the desserts are house, the sides are inventive, and there’s a cocktail program. These are all aimed at attracting the wealthier customers, and providing enough variety to keep them coming back often.

The late Josh Ozersky wrote about the “new barbecue” in a 2013 article for the Wall Street Journal. He highlighted fancy barbecue houses like Smoke in Dallas and The Granary in San Antonio. These are spots with servers and menus far outside the barbecue realm, but I think the future of barbecue across the country looks more like The Pit Room in Houston than the Granary. Customers still stand in line at The Pit Room and choose from three house made sausages, elotes, or tacos on house-made brisket fat tortillas. There’s even cold-brew coffee on tap. It’s big city barbecue to the core, but the service is just like you’d find in Central Texas. A man with a knife slices the meat in front of you and places it on butcher paper. Its familiar, but there’s still a freedom to explore for the new joints opening up. They don’t have to be ideologically fortified like their classic counterparts.

Houston Chronicle columnist J. C. Reid describes the conundrum of a legacy barbecue joint owner who might want to copy this new style. “It can’t change,” he says. “It has its customers and it has its traditions, and if it changes, it loses everything.” And those places are a reflection of their region. The old model was that one pitmaster learned from another and opened their own spot in the next town over doing essentially the same style of barbecue. The new region is the internet where ideas are shared internationally without delay. Online videos broadcast Texas barbecue techniques to Australia or Sweden or France, and the resulting barbecue creates a style of barbecue that crosses the traditional boundaries. It permeates big cities all over the world. We’ll always have our regional barbecue in the American barbecue capitals, but this new style is likely the future of barbecue in the places where smoked meats are just now taking hold.