Before I was Barbecue Editor for Texas Monthly for nearly three years, I maintained my own blog, Full Custom Gospel BBQ, and one the last reviews I wrote was for Blue Moon BBQ. The first visit was a good one, and I’ve tried a few follow-ups that were thwarted by my own poor research into their hours. Admittedly, as time passed and countless new barbecue joint opened across the state, Blue Moon was pushed further and further down my to-do list. Then I ran into Rick Moon’s son, Matt, at the Texas A&M barbecue town hall meeting in December. He promised the brisket had gotten better in the three years prior. As I found for myself when I recently visited for lunch, it has. 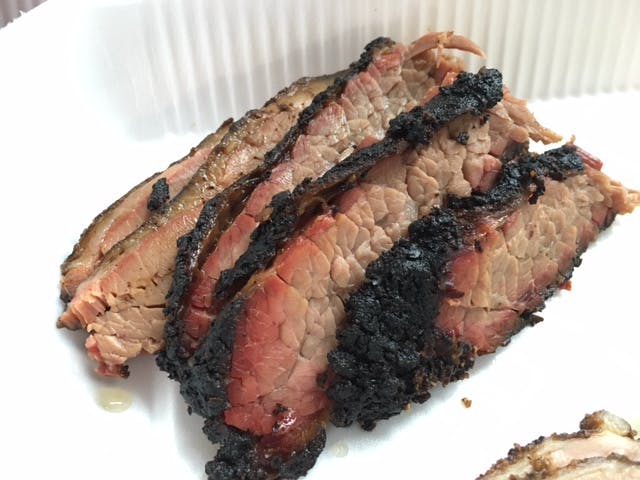 Rick, his wife, Toni, and Matt keep this joint humming. Given Blue Moon’s location–on a somewhat remote plot along the Old San Antonio Road on the way to College Station from Dallas–the place relys on regulars. And those regulars know that Thursday night is prime rib night. For a nickel shy of $17, you can get a hefty slice of smoked prime rib, a loaded potato, bread, and salad (the sixteen-ounce King’s Cut is just $24). The meat is ready around 4:00, and, as I learned after eating my early lunch, there were already four preorders called in. Nervous that I would miss the meat if I tried to just swing back by later, I went ahead and made an order too.

When I picked up it later, Toni greeted me with a smile, and I laughed out loud when she told me the price. “I don’t make any money on it, but it keeps my customers happy,” she confessed. That’s how you keep them coming back. Well, that and a stellar smoked prime rib. So many joints–even those famous for the cut–overcook it and ruin a perfectly good piece of beef, but this one was the requested medium rare and a real treat. 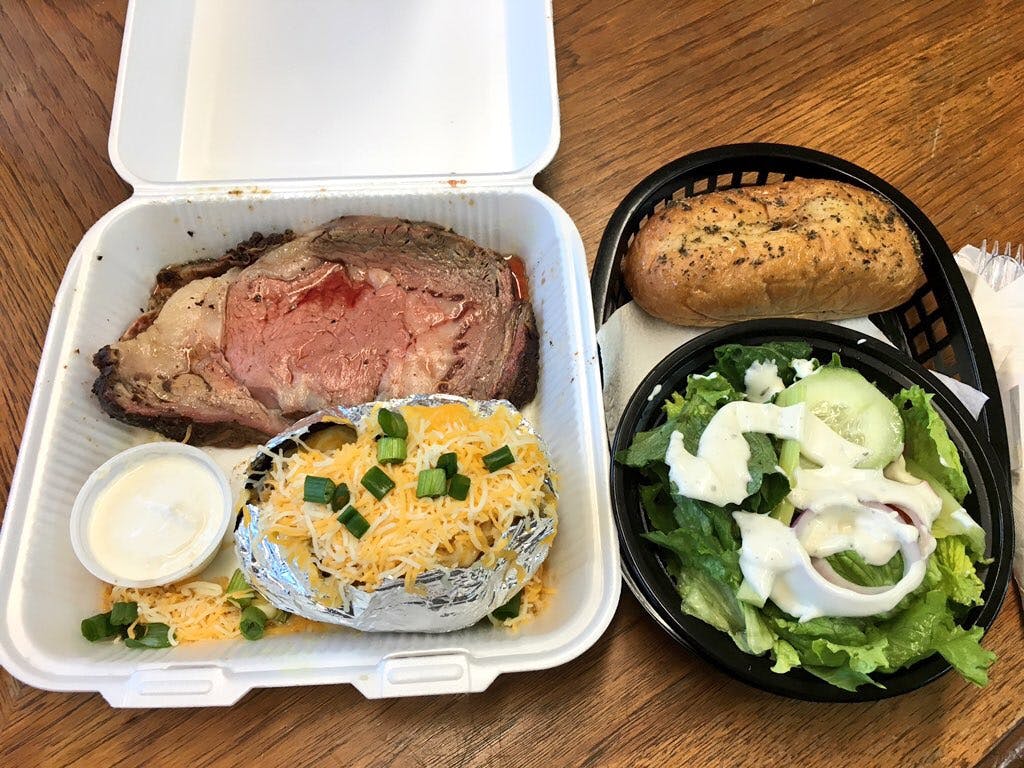 Lunch wasn’t bad either. As I already said, the brisket had improved. Both lean and fatty slices were tender, smoky, and juicy. Blue Moon uses post oak and an old steel smoker to get a good smoky essence on the meat, one that’s not overpowering. Pork loin was sliced thin but still tough from overcooking (it was way past well done). Despite that, it was livened up not by the house barbecue sauce (which is too thick and sweet for me), but the green sauce. It’s a mix of peppers, onions, cilantro, and sour cream that usually just come with the nachos, but makes a great sandwich condiment too. 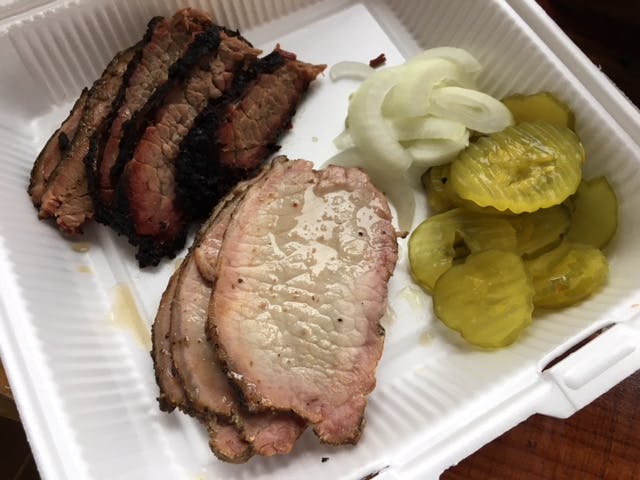 Catch This Roving Barbecue Trailer If You Can

The green sauce worked admirably on a sandwich of sliced, smoked turkey and locally-made Slovacek’s sausage. Rick said he can’t make enough of the salsa because of the unexpected popularity of the nachos. He laments how much of his well-smoked brisket gets chopped for nachos but can’t deny the profitability in a plate of corn chips. 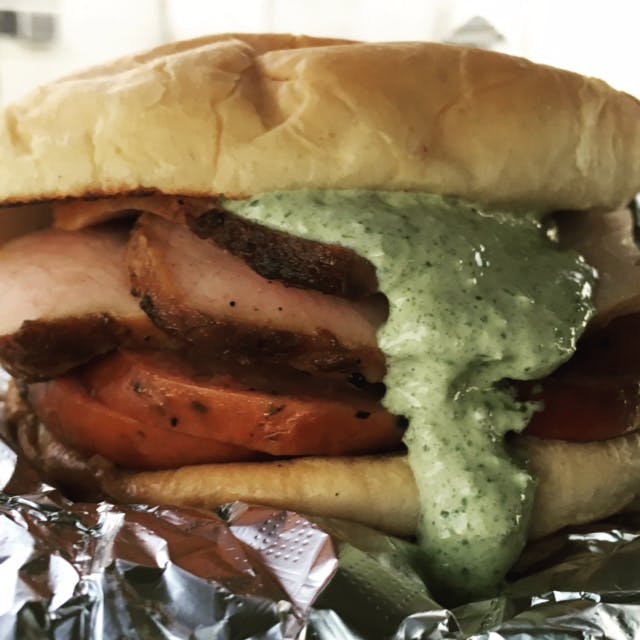 Although the pork loin was a bit of a disappointment, the juicy, smoky pulled pork and peppery ribs provided plenty more to love. The baby backs were just as good as they were three years ago, but were within an inch of the dreaded falling-off-the-bone stage. 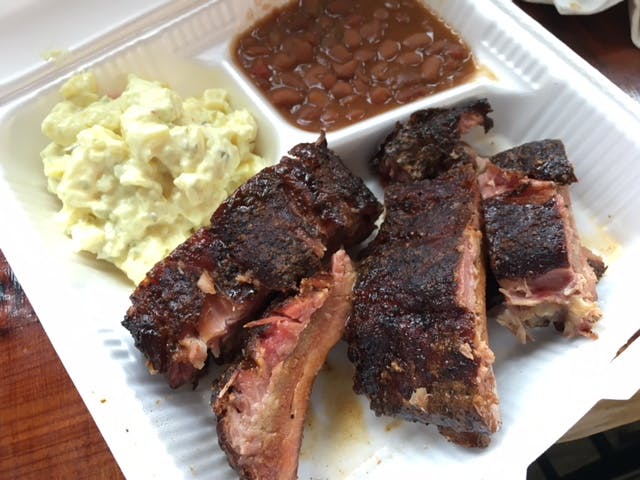 Blue Moon could stand to add some homemade touches to the sides, which didn’t match the meat for quality, but the tasty chocolate chip cookie wedge for dessert almost made me forget about those beans and potato salad.

The Moons have built themselves a good barbecue joint on the edge of nowhere. And they’ve built a good life around it. They live just up the road around Camp Creek Lake, and have taken to the laid-back lifestyle that doesn’t come with a stressful commute. Their customers are friends and neighbors, so their aim to please seems more personal. That aim is true on most of the menu, so maybe it’s time you found a reason to make Blue Moon your destination, or at least pretend like it’s on your way to somewhere.