Popular restaurants all over the world have signature dishes, some even have just one item that makes them a dining destination. You go to Katz’s Deli in New York for pastrami, Mary’s Cafe in Strawn, Texas for chicken fried steak, and nobody complains about the fish at House of Prime Rib in San Francisco. At Bodacious Bar-B-Q in Marshall, Texas you go for the ribs. 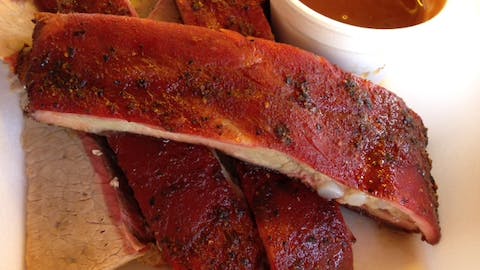 “A chain!” you ask? Yes. Bodacious is a mostly East Texas (there is that San Angelo location) barbecue chain started by Roland Lindsey in the 1960’s. I’ve been plenty critical of Bodacious in the past for its consistently average barbecue, but more so because it represents the target that most joints in the area strive to reach. If every Bodacious made better barbecue, then barbecue in East Texas as a whole would probably be better. After visiting a few along I-20 several months back I had all but given up on finding anything truly remarkable at any of their locations. Then Jordan Jackson told me about the ribs at the Marshall location.

I met Jordan Jackson when he worked at Stanley’s Famous Pit Barbecue in Tyler, but he left that job a few months back to go work for his father-in-law Roland Lindsey. Lindsey hasn’t been in the best health lately, and Jackson joined the team to reopen the currently shuttered flagship of the Bodacious chain on Mobberly Ave. in Longview. Jackson invited me out to East Texas to interview Lindsey for TMBBQ, so I arrived knowing there was a vested interest in getting me to eat these ribs.

Each Bodacious location is run by someone with ties to another Bodacious. It’s not so much a training course they put you through, as an on-the-job audition for those seeking their own spot. Joe Isonhood took the reins of the Marshall store in 1994, and has focused on making great spare ribs ever since. Lindsey and Jackson eat here often, and they don’t stray from their usual order  – spare ribs and cole slaw. 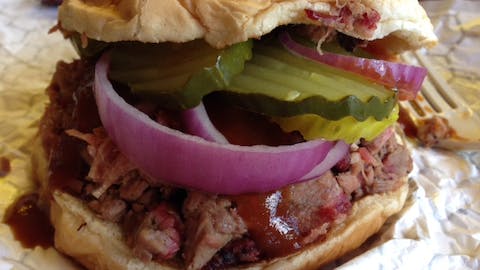 We finished the interview in Longview, then literally raced to Marshall in separate cars (although they probably didn’t know we were racing). Here I had the perfect opportunity to see what ribs I would get versus the chain’s founder. My order was ready before Lindsey and Jackson walked through the door, and I rudely commenced my meal at the table right in front of them. We all knew by looking at the brisket that it wasn’t worthy of the highlight reel. I had interrupted the natural order of things by ordering the sliced brisket. It halted the process from whole brisket to chopped beef mid-stream with a poor result. The pale and flavorless beef was just a few thwacks of the cleaver away from its predestined station as chopped brisket on a bun where it served more dutifully under a generous drizzle of sauce. Like the rest of the menu, it was a sideshow to the ribs.

Sides of fresh, crunchy slaw, creamy homemade potato salad, and deeply rich pinto beans were all great, but I won’t dwell any further on the forgettable sausage, turkey, or even the pulled pork which Roland himself said was pretty bland after a forkful from my plate. There’s not even a need for a photo, so how about more ribs? 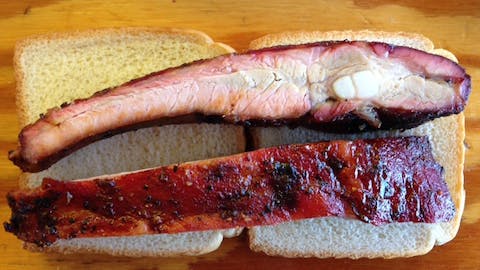 These are full spare ribs, so they have some heft. They also have a little chew to them. You know they’re not overcooked, but there’s nothing left after a bite but a white bone. Ribs, like any other smoked meat, get more tender while they’re held in the warmer, but at this store they make sure to have fresh batches coming off throughout the day. There’s no need to worry over tired, mushy ribs. A bright red bark was sticky and robust. Bodacious provides a sugar-heavy rub from a central processing facility (along with the sauce) to every location, but they put it on heavier than normal here. It makes for a sweetness that you’d usually find with a glaze, but it’s all in the rub here. These aren’t ribs for the salt and pepper purist, but there’s nothing wrong with a sweet bite of smoked pork. I can usually restrain myself from gluttony at any one barbecue joint while out on the search, but I ate every rib in my order, then got a second. I also wanted to see how much variation there was from batch to batch. My first order, second order, and the ribs of my counterparts in between were all equally stunning. 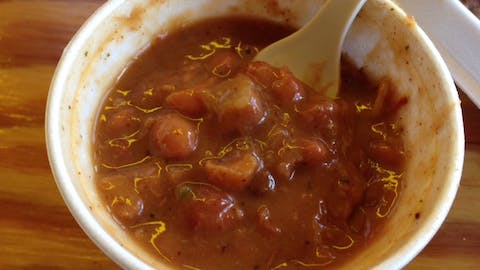 Owner and pitmaster Isonhood smokes anywhere from 70 to 150 racks a day, and then sells them for a paltry $22 for a full rack. He credits one particular Bewley smoker in his fleet that uses stones to even out the heat for the excellent ribs. Every other table at the restaurant had ribs on the table, and even Roland Lindsey quipped that they shouldn’t bother with the other meats and just become a rib joint. He was joking, but it might not be such a bad idea. It could make this joint a rib destination as renowned as Country Tavern down the highway in Kilgore (where brisket and sausage came to the menu long after ribs), but local lean brisket lovers might revolt. I had to stop in Kilgore on the way home for a comparison. Country Tavern has long been the torchbearer for great ribs in East Texas, but Bodacious Bar-B-Q in Marshall had them beat on this day, and that’s nothing to shake a clean rib bone at.