Jordan Jackson is living the dream. It’s not because Texas Monthly named the Longview location of Bodacious Bar-B-Q, which he reopened in 2015 with his late father-in-law Roland Lindsey, the fourth best barbecue joint in Texas. He appreciates the accolade and the profitability that followed, but along with the notoriety came uncomfortably high expectations and stress. Like so many other successful pitmasters and chefs that came before him, he yearned for a small place without the attention, where he could focus on cooking. Most pitmasters don’t ever get to make good on that wish, but Jackson found the obscurity he was looking for at the newly reopened Bodacious Bar-B-Q in Gladewater.

Some stores in the Bodacious Bar-B-Q chain are owned independently and others are owned by the company. The Gladewater location is company-owned and long-time manager Mel Garcia retired last year. Jackson kept the store closed long enough for an overdue renovation and reopened it in November of last year. He took over the cooking duties and Robin Hightower, daughter of the late Roland Lindsey, ran the counter. They’ve since added Ashton Dyer to help in the pit room, but it’s a scant crew. Business has been good, but not overwhelming. “This is my hiding spot,” Jackson said. “It’s relaxing.”

The scene in Longview is anything but relaxing. Bryan Bingham, who trained under Jackson, runs the pits at the original Mobberly location while Jackson is in Gladewater. Barbecue fans line up for an hour or more on weekends to try the highly praised barbecue. Many probably assume Jackson is doing the cooking, but he’s in the next town over. Even in his own absence, Jackson isn’t worried about the quality at the store he helped revive. “I went over there and the food was flawless,” he said of a recent visit. “I got there ten minutes before we opened. All I did was grab a knife and cut meat. It was everything I wanted.”

Jackson is happy to provide another option for East Texas barbecue in nearby Gladewater, especially for Longview locals who don’t have time for a long line. “It’s hard to be a regular at a place that gets busy like that,” he said. Some familiar faces have learned they can drive the fifteen miles from Longview to Gladewater and get the same barbecue without the wait. That’ll probably change when word gets out, but Jackson enjoys the leisurely pace for now. “It’s nice to cook small batch barbecue,” he said.

The menu is smaller, too. Jackson doesn’t even bother cooking pork shoulders anymore, though it remains on the handwritten menu. “It’s definitely a beef store,” he said, even with brisket at $21 per pound. This being East Texas, there are still customers who ask for it extra lean. I watched Jackson scrape off a beautiful fat cap from a brisket for the customer in front of me. Those scraps go into a pot for the joint’s version of a sloppy joe: chopped meat and sauce simmered together, on a sandwich for just $2.50. Without the pulled pork, the sloppy joe is all 44 Farms brisket, and one of the best barbecue values in Texas.

The sliced brisket at the Gladewater location is as good as the original, but I come for the ribs. Jackson applies a generous amount of a sweet rub to baby back ribs, then cooks them until they’re just done. They still cling to the bone a bit. “All you’ve gotta do to make a good baby back is don’t overcook it. They’re pork chops,” Jackson said, explaining that they come from the pork loin, same as the chops. “When do you ever eat a good pork chop that’s falling apart?”

Jackson has plenty of barbecue experience, but cooking on unfamiliar smokers here hasn’t been without incident. “One night the overnight dampers [on the smoker] leaked air and burnt up fourteen briskets,” he admitted. It had to close the next day. It took him six weeks to get the pits dialed in, and he’s still working to get the sausage just right. It’s all made in-house, but you won’t get the variety like you’ll find at the original, and the links I tried could have been more plump and juicy. Jackson said he’s planning to shuffle in a new smoker from Bodacious storage to try and solve the problem. “I like messing with the pits. That’s my favorite thing,” he said.

This new situation has allowed Jackson to get back to his barbecue roots, tinker with dampers, and read the smoke from the pits. Along with oak, Jackson has added more hickory than mesquite into the firebox because he likes the deeper color that hickory provides. With a lighter load, he gets the opportunity to notice these details. Jackson also gets some quiet time in the pit room to remember guidance from his late father-in-law. “Roland actually pointed it out to me one day. He said, ‘The damn briskets are twinkling. You need to cool your pit down,'” Jackson said. When the fat bubbles on the surface of the briskets, he knows he needs to back off the heat. “If you keep them below that twinkle you’ll never ruin them,” Jackson said. Thanks to a less hectic cook schedule, now he gets to enjoy watching the twinkle. 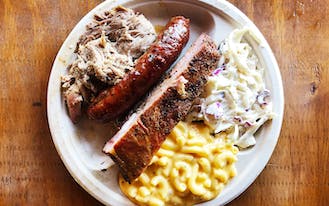 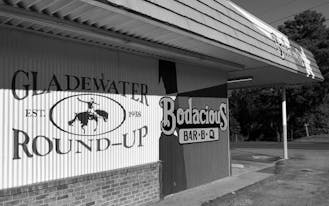 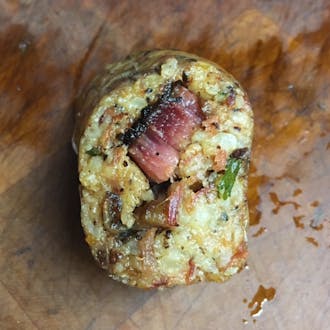