We wrote about Bohemia Chips a few weeks ago when the Czech snack company announced plans to send a contest winner from the Czech Republic to Austin for the Texas Monthly Barbecue Festival. The company has sent an emissary to Texas in the form of Kazma Kazmitch. Upon landing in Texas he loaded a pickup truck with chips and drove around Texas passing them out. Here’s a video:

I’m not certain of the rules of the contest, but you probably live in Texas if you’re reading this and you can get your very own tickets to the Texas Monthly Barbecue Festival tomorrow. The Bing translator associated with Facebook wasn’t too clear on Bohemia’s message either, but we support international exposure of TMBBQ. 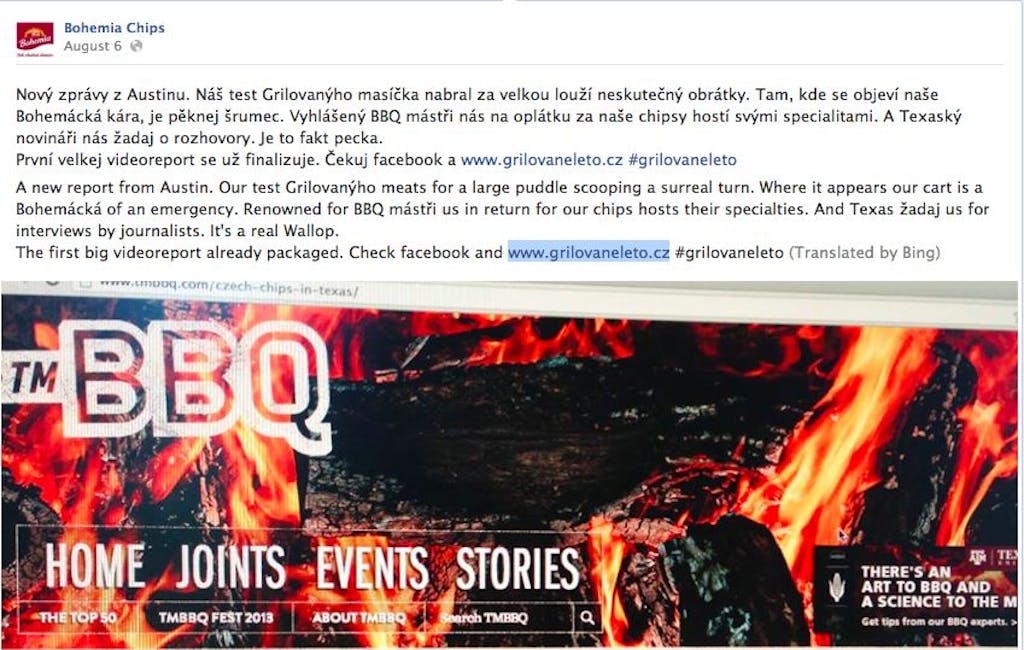 While Kazma was cruising around Austin he stopped at the offices of Texas Monthly where he tried to get my editor Andrea Valdez on camera eating some chips. That trick didn’t work, so they left her with some chips. I got a few bags to try. The name of the flavor on the bag was “grilované masicko” which translates into “barbecued meat”. I had to give them a taste test against some American barbecue chips and some meat-flavored chips. Yes, we have meat-flavored chips on American grocery store shelves.

What I learned was that we like much more flavor dust on our chips. We also seem to like a lot more sugar. The barbecue chips I tried were Bob’s Texas Style, but they could have been any major brand. There is a huge amount of sugar in there to simulate a sweet barbecue sauce, and that wasn’t present in the Bohemia chips. The Bohemia chips do have a meaty flavor, but thankfully not as off-puttingly beefy as the terrible Ruffles steak flavored chips. Overall they were good chips, that may taste more like grilled meat than you’d expect. You might not consider that a good thing, but I’m happy I got two bags.