I recently documented my love for the rib sandwich, so when I learned there was a company selling boneless racks of ribs, I had to order them. It seemed these ribs from Ohio-based Bubba’s Q would be the perfect alternative to the deconstructed rib sandwich.

Al “Bubba” Baker, a man I grew up rooting for when he was a Cleveland Brown, developed the idea along with his daughter Brittani at their restaurant in Avon, Ohio, where a $10.99 boneless rib sandwich is on the menu. The bones are removed leaving the rest of the rib rack intact. As their website explains, “We slide the bones right out leaving nothing but tender meat.” The patented product was a hit on Shark Tank, and is now available at Costco and periodically on QVC.

Reading through the patent (#7959500), it seems the process involves simply cooking the rib racks long enough to allow the bones to come out. Part of that process is described as “enclosing or wrapping the length of rib meat in a moisture loss preventive material,” kind of like wrapping ribs in foil while cooking. According to the patent application, this step “acts as a solution to break down the natural attachments between the muscle (meat) and the bone.” The application is lengthy with plenty of diagrams; it’s also the first time I’ve seen moist towelettes mentioned in a patent application.

A few days after I placed my order, a package of three individually packaged frozen rib racks arrived at my house in dry ice. The instructions were simple. Thaw the ribs, and heat them up in the oven. The package label ominously declares them to only be 99 percent boneless, but . . . YOLO! I also learned that these ribs are smoked and packaged by Beef International Inc. in Pennsauken, New Jersey, just across the river from Philly. 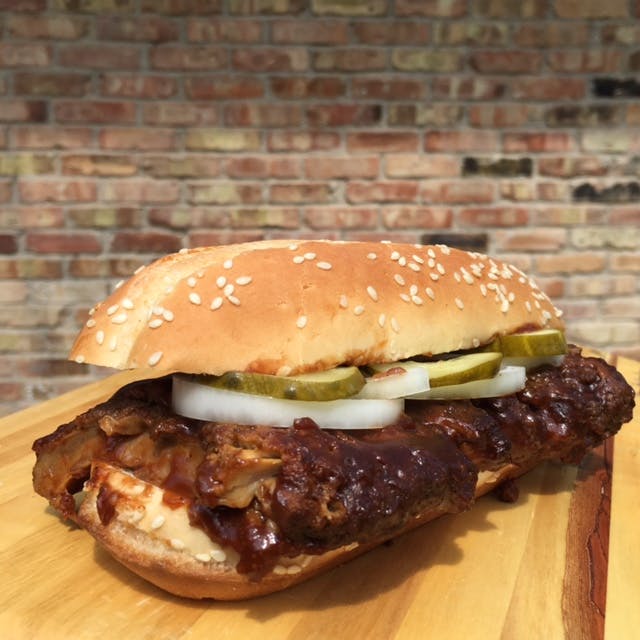 If I was going to make rib sandwich out of boneless ribs, I might as well copy the most famous one. The McDonald’s McRib is made of pork ribs in the same way that a hot dog is made of filet mignon—meaning it isn’t. A McRib starts with a frozen patty of pressed pork bits, so I thought what I was making—a sandwich using real rib meat—would be a big improvement. Instead, the sandwich made with Bubba’s Q tasted like, well, a barbecue sauce sandwich. For freshness sake, it’s always better to package frozen meat within a liquid, and Bubba’s Q accomplishes this by drenching their product in a thick sauce loaded with liquid smoke. The ribs are so thoroughly overcooked (remember, they have to be literally fall-off-the-bone tender to even be made) that they become about as mushy as the bread they’re between. After a few bites, I went back to my leftover ribs from a previous barbecue meal that I had also heated up. 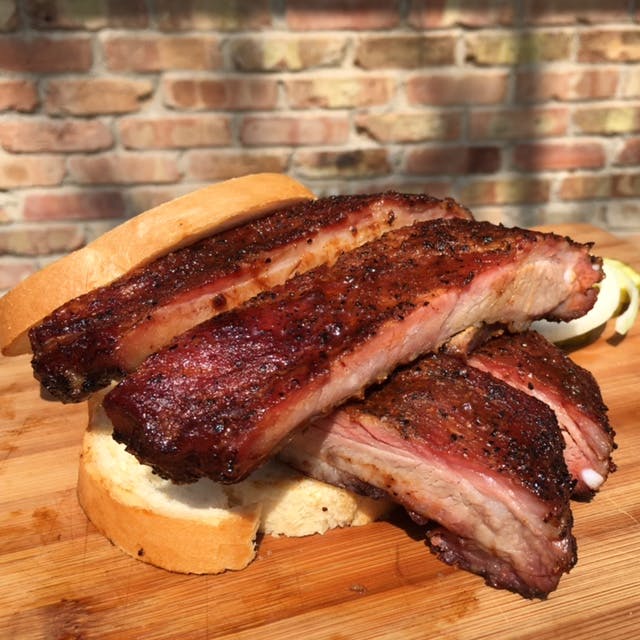 I wish I’d found the key to a new generation of rib sandwiches—or at least a decent McRib doppelgänger. Instead, I think I’ll stick to the version with the bones still in.