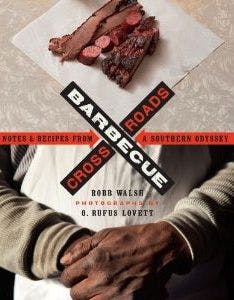 Title: Barbecue Crossroads: Notes and Recipes from a Southern Odyssey

If you’re familiar with Robb Walsh through his decade-old book Legends of Texas Barbecue, then you’ll likely enjoy the great writing in Barbecue Crossroads. You’ll also get more of it. They’re both recipe books with some narrative mixed in, but the road trip accounts in Crossroads are more in depth and really provide a feel for the joints visited. Unlike Legends which is a celebration of Texas barbecue history, Crossroads is a clear lamentation if what Walsh believes is a rapidly dying art – wood cooked barbecue.

In search of the barbecue artists that remain, Walsh and photographer O. Rufus Lovett leave East Texas bound for the Atlantic coast in Lovett’s white Honda Element. Although Texas is quickly in the rearview, the state is still well represented. The first chapter highlights the intersection of religion and barbecue in East Texas and the book concludes with an ode to historic community barbecues in Texas. There’s also plenty of Texas references in each chapter, but the road trip cuts a path through Arkansas, Tennessee, Alabama and Georgia before taking an extended sojourn in the Carolinas. The trip through Western Tennessee provided all the background information on joints that I had just enjoyed on a rapid trip through the same area last month. Walsh was able to linger while my pace was quickened by a family eager to stay on the move. His reporting is both informative and entertaining, although I liked Siler’s in Jacks Creek a whole lot more.

Walsh’s enthusiasm for the old barbecue traditions is palpable, and his talk of  a vanishing breed of barbecue cooks in the Deep South is sincere. However, it’s hard to be alarmed here in Texas with the proliferation of barbecue joints focusing on all-wood cooking. Maybe we’re more fortunate than most states.

I respect that Walsh is not short on opinion. There is no glossing over a joint that didn’t meet his expectations, but what you’ll likely find is praise, and for good reason. The itinerary is for the most part meticulously plucked from “best of” barbecue lists across the South. If you’re a student of American barbecue or a member of the Southern Foodways Alliance, most of the names like Craig’s, Archibald’s and Scott’s will be familiar. There might not be much new ground covered, but the depth of Walsh’s descriptions coupled with Lovett’s handsome photographs are the second best thing to visiting a gem like Grady’s in North Carolina where they still buy their hogs from a local farmer rather than using commodity pork.

After all these stops looking for American barbecue culture, the author’s conclusion is jarring. Walsh writes “…the larger lesson was that for the most part, barbecue restaurants are not places to go looking for American barbecue culture anymore.” He argues that it can be found at community barbecues like the ones in Texas that he documents in the last chapter. I think in Walsh’s adulation of these community barbecues he too quickly dismisses the rich barbecue culture he just shared with readers. There’s still plenty out there to enjoy and Barbecue Crossroads can help you find a path to some of the barbecue treasures that remain.