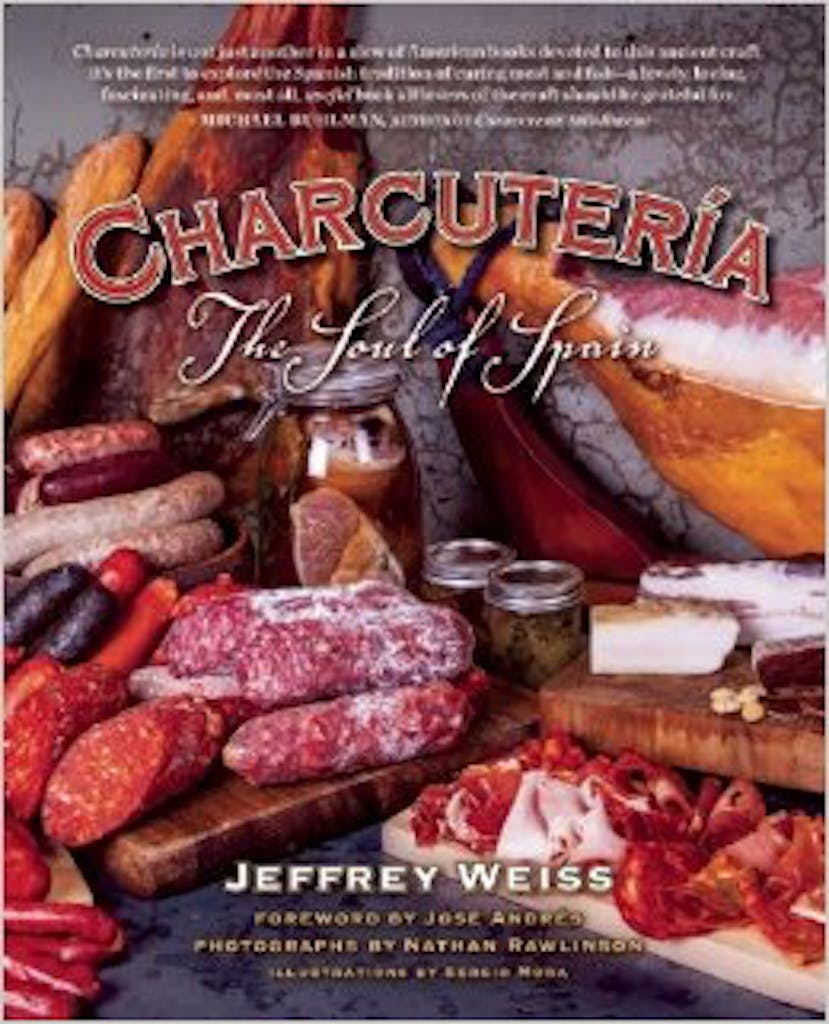 Title: Charcutería: The Soul of Spain

In recent years we’ve seen the publication of several high profile books on charcuterie and salumi. From them you can learn the finer points of curing meats in the French or Italian traditions, but recipes from Spain were hard to come by. Now, American chef Jeffery Weiss has chosen to introduce these unique recipes for Spanish cured meats – charcutería – to an American audience through this beautiful new book. “Spanish-style charcuterie is underrepresented, misunderstood, and largely unheard of in this country,” notes Weiss. Besides the occasional nibble of jamón or the lingering smoked paprika flavor of Spanish chorizo, there’s not much that I was familiar within Spain’s cured meat traditions until i thumbed through this collection. That’s probably why I was stunned to find such a tempting recipe for baby back ribs.

That rib recipe (which is shared below) starts with the famed Ibérico hogs which famously fatten themselves on acorns. There’s plenty more Ibérico to be found amongst the hundred other recipes in the book, but Weiss also pays homage to the other less celebrated hog breeds around the country like the Basque euskal Txerria, the Spanish white pig, or the gochu Asturcelta whose high moisture content makes it “destined by nature for the smokehouse.”

The recipes in Charcutería allow you to get as ambitious as you’d like. A recipe for fresh chorizo will have you eating sausage the next day, while the more familiar cured version will take you a couple of months. The compelling photos throughout by Nathan Rawlinson will have you longing to try your hand at most everything in the book.

For some barbecue flavor, the recipe I was most drawn to was the costillas, or ribs. These ribs are first cured, then cooked in their own fat before chilling in the confit overnight, and finally hitting the grill to get crisp as a final step. I can even imagine switching out the cinnamon and bay leaves for dried chiles and black peppercorns to give them a Texas flavor, and maybe a good dose of smoke too. Now I just need to find somewhere to get Ibérico ribs.

While cooking in Spain, I noticed culinary philosophical differences between Americans and Spaniards when it comes to grilling. While Americans slather their smoked ribs in barbecue sauce, the Spanish like to let the flavor of their meat do the talking, especially when Ibérico pigs are the meat in question.

I’m guessing the difference is explained by our history of smoked barbecue meats and the world of sauces and condiments that complement them, contrasted with the Spaniards’ heritage of acorny Ibérico fat, and letting its subtle flavor come through. The Spanish accent this natural flavor only lightly, with ingredients like herbs and spices.

This recipe, from the sabias of Extremadura, demonstrates the Spanish penchant for soft flavors like lemon and cinnamon that are found in everything from flans and ice creams to meat and other savory recipes. For those who must have sauce, I’m including a killer glaze that we prepared while the ribs were cooking. The acid in the sauce helps cut the richness of the confited meat.

Rinds of 4 lemons, each removed in 1 strip

2. Place the ribs in the baking dish and toss them with the cure, coating them evenly. Sprinkle with the oloroso sherry. Cover with plastic wrap and refrigerate for 24 to 36 hours.

4. Remove the ribs from the cure. Rinse well and pat dry with paper towels. Place the ribs in a large Dutch oven with the lemon rind, cinnamon sticks, garlic, and whole bay leaves. Cover with the rendered pork fat.

5. Place the Dutch oven over medium heat and bring the fat to a bare simmer. Remove from the heat.

6. Cover and place in the oven for 2 hours, until the ribs are fork tender and the bones pull easily away from the meat. Remove from the oven.

7. Allow the ribs to cool to room temperature in the Dutch oven, and then place in the refrigerator to chill in the confit overnight.

8. In a small saucepan over medium–high heat, combine the PX sherry and the PX sherry vinegar. Bring to a boil and then reduce to a simmer. Simmer for 8 to 10 minutes, until the sauce’s volume is reduced to a cup (80 mL). Remove from the heat and set aside.

9. Light a charcoal grill or heat a broiler on high heat (fair warning: The ribs will splatter a lot in an oven, so use caution!). Remove the ribs from the fat, wiping oâ any excess. Place the ribs, meat-side down, and cook them for 10 minutes, until cooked through and starting to brown.

10. Glaze the ribs with the sauce on the bone side. Flip them over and glaze the other side. Continue cooking for 5 minutes, until nicely glazed and just charred a little in spots. Remove from the heat and serve.

Note: We ate these ribs right off the grill during the matanzas—finger food at its best! For more civilized affairs, these ribs would make a great main course, especially if you don’t have a smoking rig handy for doing American-style ribs.