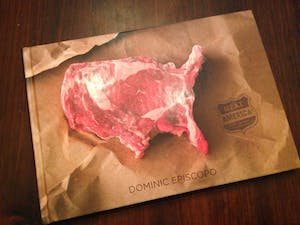 Meat art has a provocative history in the last few decades. Lady Gaga famously wore a dress made of raw meat to the 2010 MTV Video Music Awards. That outfit was certainly unique, but the idea was predated by Jana Sterbak’s “Vanitas: Flesh Dress for an Albino Anorectic”. It was displayed at the National Gallery of Canada in 1987, while New York artist Zhang Huan wore his muscular meat suit on jaunts through the city in 2007. Artist Robert J. Bolesta created an alphabet of ground beef called “Value Pack” in 2005, and it graced the cover of Meatpaper magazine a couple of years later. Meat as performance art was on display at “Meat Joy” in 1964, while many of the raw meat works in its follow-up “Meat After Meat Joy” in 2008 had to be removed from the Pierre Menard Gallery in Cambridge after decay set in. Such are the risks of meat as medium. 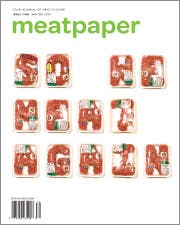 Dominic Episcopo, a Philadelphia based photographer, is the latest meat artist with his work on display in a book called Meat America. While the book was completed last year, the inspiration came from the cover photo that was shot five years earlier. It is a ribeye steak fashioned to pretty accurately resemble the lower forty-eight. He displayed his work in galleries before starting a Kickstarter campaign earlier this year to help fund printing of the book. I was lucky enough to have a copy sent to me from the author.

In between the covers are many of the fifty states carved from meat, but the rectangular ones that offered little challenge didn’t make the cut. Sorry Wyoming. You’ll find Texas carved from a porterhouse steak next to a quote from George W. Bush. “Some folks look at me and see a certain swagger, which in Texas is called ‘walking’”. There are plenty more humorous quotations from our forefathers and celebrities about flatulence and sausages, but there are also statements about the beef industry. We learn that one beef patty may contain “anywhere from fifty to over a thousand different cattle from five different countries”. This sits beside three packages of ground meat with the letters TMI. It may be too much information for some indeed, and the images may be too raw for the casual omnivore.

Bolt Over to Briscuits for a Brisket Biscuit

Video: Behind the Scenes at Goldee’s, the Number One Barbecue Joint in Texas

There is a level of artistry in each photo. Cuts shaped into California and Elvis alike were carved by Episcopo before he photographed them. According to Episcopo there was some work done by photoshop, but nothing that significantly altered the carved meat in the images. The carvings and composed backgrounds are much more than just meat on a page. The result is a collection is at once creative, irreverent and handsome.

I asked what he did with the meat after the photography was complete:

“After the shoot we eat most of what I photograph unless I have handled it too long. The meat is usually the last thing on set. I set everything else first and use a stand-in for the meat that is usually a block or something for size…One that did not end so well was Michael Jackson. He is made of calf’s liver. It was kinda gross and after handling it for a while it became sticky & stinky. And it’s the only time I threw everything out and had to come back the next day and start fresh.”

There was even a sausage party with the ten pounds of Italian sausage in “Don’t Tread on Meat”. In an earlier interview he noted the odd conversations he and his wife had before some of those meals “Well, I’m eating Abe Lincoln, and you’re eating New Jersey tonight.” It’s certainly a rare case of meat art being consumed. I wonder what Texas tasted like?