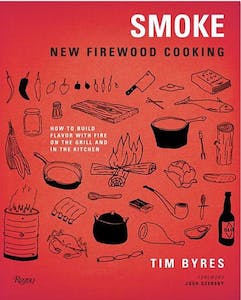 Tim Byres and I have known one another for a few years now. Before I knew him the owners of Smoke, a restaurant in Dallas where Byres is the chef, asked me to come in and try their barbecue. They were going to open the following week and wanted some feedback on the smoked meats. I offered a full written critique. When I came back to the restaurant a month later they were in full swing, but nothing about the barbecue had changed based on my comments. I was confused, but still generally pleased with the food. When I got to know Tim later I realized the preview tasting wasn’t Tim’s idea at all. It was with Smoke that he wanted to ignore the chatter of critics and outside opinion while crafting his menu that embraced this style of cooking that was new to him. He had gone on a driving tour of the South to search for a style of cuisine that could speak to him. The resulting menu at Smoke and the recipes in this book are the end result of that search.

Byres lays out the premise clearly from the start. “Demystifying food…is a big part of what I want to share in this book. I will map out how to build a smokehouse, explain how to dig a barbacoa pit, and show you many other useful means of firewood cooking.” Build a smokehouse and dig a barbacoa pit, you say? Right here is when you realize this book is not meant to teach a few recipes you can quickly whip up for tonight’s dinner party. Byres is asking you to dive into a lifestyle. Nobody expects you to buy a trench shovel and a bone saw if all you plan to do is smoke a rack or ribs every now and again. I mean, there are actually plans for that aforementioned smokehouse in these pages. Is that practical? Who cares. Chances are you haven’t even tried that vinaigrette recipe from chef-of-the-moment’s new cookbook and it takes two minutes. However impractical for most if us, at least Byres offers the instructions for the rest who might want to cold smoke some hams, and you will learn about cold smoking. I know I was tempted to get a shovel and a pick-ax to dig a barbacoa pit when I saw the photos of the lamb that he cooked in his own. My wife had other ideas for the backyard.

If you’ve dined at Smoke, you’ll find recipes for some old favorites like foie gras & chicken liver pâté and their coffee cured brisket. He also gives up the secrets to their much balyhooed pork jowl bacon and three superb house made sausages. Some of the recipes are complicated and involve many steps, sometimes over several days. Thankfully there are detailed instructions and helpful photographs to lead you through the process. A series of photos on making chile purée from dried chiles is so visually explanatory that you barely need the written instructions on the facing page. The same can be said for the photos showing how to dress and stuff a rabbit. 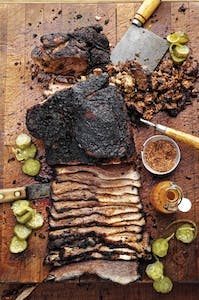 Creating, managing and harnessing fire is the essence of the book. Byres shares his thoughts on various smoking woods and their properties along with comparisons of lump charcoal versus briquettes. All of this was expected, but I also learned a few things about using wood ash to help control the heat of a fire too. Then he shows you how to use that same ash to make hominy from field corn.

As New Yorker Josh Ozersky points out in the foreword, Texas is “the nation’s barbecue capital.” This means you’ll find some good old barbecue in here too. Pork ribs are included as are my favorite Smoke menu item – beef short ribs. One questionable bit of advice appears in the recipe for smoked brisket. Byres provides the reader with specific temperatures denoting doneness. Maybe this was done to make the process easier to grasp for a novice, but brisket doneness is better described by feel. I wish Byres had extended the recipe by a paragraph to add his technique which I doubt ends with a thermometer. The following page then shows a clear step-by-step method for cutting a whole brisket. In the text Byres notes the arguments about slicing versus chopping, then just slices the flat and chops the point as a compromise. Ending the description with “now stop fighting and eat your lunch.” 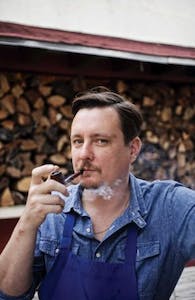 In addition to clear instructions on a wide range of live fire cooking, the book is also full of stunning food photographs. Some include a little whimsy like the oyster stew paired with a can of Lone Star and a shot if whiskey. More of that sense of humor can be found at the end when detailed steps for smoking a pipe are provided. The title is Smoke after all.

I happened to sit next to Byres on a plane earlier this year. We were both headed to a barbecue event in New York, and Tim shared his sincere thoughts about the world of barbecue. He hates the bickering, critiquing and the rankings and would rather see the celebration of community through food. We both knew my stance on rankings, and I won’t hesitate when it comes time for the next Texas Monthly Top 50. But in the meantime I look forward to seeking the communal aspects of barbecue using this book is a tool toward that end. Maybe I can even convince my wife that digging that barbacoa pit is for a greater good.