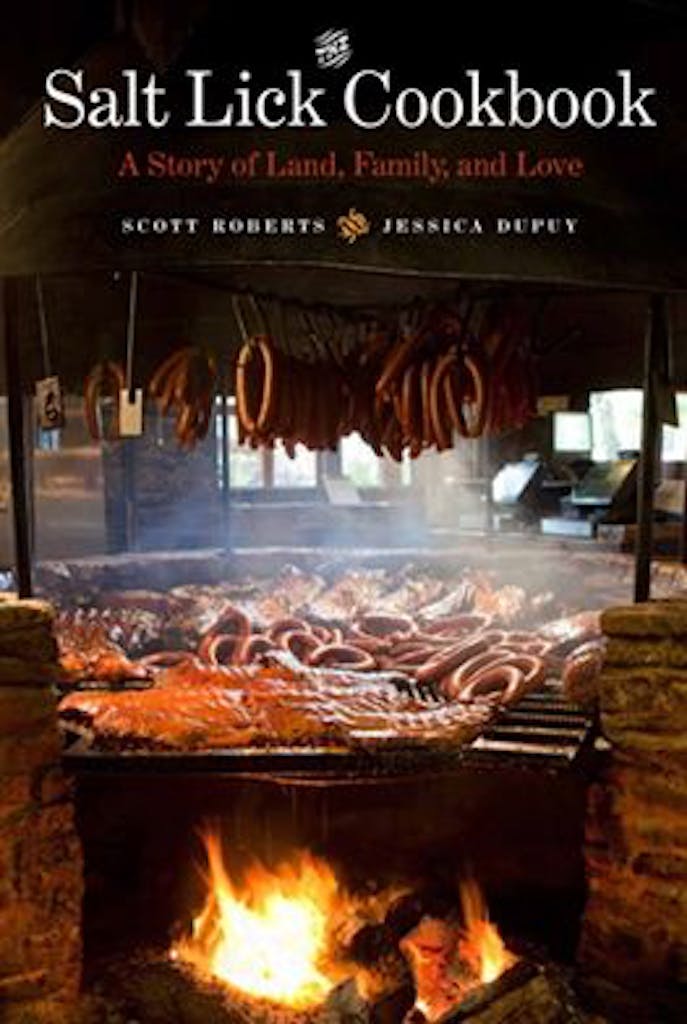 This is not a a barbecue cookbook. It’s a family history told through food and recipes. That may be surprising to fans of the Salt Lick, but barbecue comprises less than twenty percent of this very thick collection. It is merely the most recent chapter in a rich family history that began in North Carolina.

The story of Scott Roberts’s family was the most intriguing part to me. His great-grandfather, a North Carolina native, and great-grandmother landed in Indianola, Texas in 1874. By 1881 they’d found a permanent place to settle along Onion Creek in Driftwood.

“Our barbecue and the sides we serve reflect the methods and resources my great-grandparents used on their journey to Driftwood,” notes Roberts. You can see that in the recipes for cole slaw and potato salad which contain shelf-stable ingredients like pickled onions, vinegar and sugar rather than the usual mayonnaise base that you’ll find in other Texas barbecue cole slaw recipes (be sure to check the corrected slaw recipe on the Salt Lick website before chopping any cabbage). The direct heat cooking on the finishing pits at the present day Salt Lick are inherited from the open pits used out on the wagon trails. Even the sauce recipe is made with non-perishable ingredients like tomatoes. From the sauce label we know there’s oil, sugar, vinegar, mustard, worcestershire, and spices. The book also mentions ginger. If you’re looking for the rest of that recipe, you’re out of luck. The sauce is still a secret.

It was a tumultuous history that would follow the family’s settlement in Texas. Scott’s grandmother was exiled from the family for a time and his dad went to war in the Pacific, but they all eventually came back to Driftwood. That’s where Scott’s father Thurman and his mother Hisako (they met in Hawaii) decided to start a barbecue stand in 1967. Scott, who has run the restaurant since 1987, helped dig the original pit, so his connection to the restaurant is understandably deeper than just running a business. He’s carrying on a family legacy and it shows in this book.

Before delving into barbecue, the book looks back to Scott’s grandmother Roxie to share her recipes for Southern favorites like fried chicken and biscuits. The recipes come with well-written descriptions and illustrated instructions for techniques that require greater explanation. Part of the reason the book is so thick is the inclusion of all the incredible food photography from Kenny Braun. It’s not often you find a two-page spread of simple fried okra, and it made me want to try out the recipe for a mid-afternoon snack.

As the family history progresses, there are recipes from his mother, his father and an uncle, but it’s the stories from Scott’s family and of the Driftwood area that continue to catch my attention. A touching story about meeting his wife Susan – in Hawaii of all places – and their journey together through multiple surgeries that have threatened her life. All the while she encouraged him to keep the restaurant going and they eventually had a daughter.

The book eventually gets to the barbecue. Not including that sauce recipe, you’ll be able to duplicate the entire Salt Lick menu including the pork and beef ribs, turkey breast, and of course the brisket. The brisket recipe includes a step-by-step process for slicing a brisket along with tips on how to cure the meat sweats – “take a nap”. A profile of pitmaster Carmen Gonzales is also included. He has worked at the Salt Lick since day one, and his sons now work the pits too.

A section called Brisket 101 describes the full brisket cooking process for the Salt Lick with a series of S’s. Selection (choice grade or better), seasoning (salt, black pepper and cayenne), searing (on an indirect smoker at 225 for an hour), slow cooking (at 185), and sauce caramelization (over direct heat) are the steps involved. Some confusion could be caused by the brisket glossary. The terms they use at the Salt Lick don’t match up well with the commonly recognized USDA nomenclature. What would normally be called the “flat” is referred to as the “loin” here, and the “point” is separated into two pieces that the Salt Lick calls the “flat” and the “deckle.” This could be confusing to a brisket novice, but this is the brisket language used at the Salt Lick.

Say what you want about the barbecue at the Salt Lick. One thing that can’t be disputed is its popularity. According to figures in the book they go through 950,000 pounds of brisket every year. They’re open seven days a week, so that amounts to roughly 2,600 pounds of brisket served every day. That’s a lot of beef.

The final chapter is the wedding menu from Scott and Susan’s daughter Maile. The ceremony was held at the Salt Lick, and it seemed a fitting to conclude with the next generation to keep the Salt Lick going strong.

*Both Jessica Dupuy and Kenny Braun have contributed to Texas Monthly.