You may remember last October when John Mueller was shut out of his well-regarded JMueller BBQ trailer on South First Street in Austin. He wasn’t happy about it, to say the least, but stayed quiet, plotting his return. That return will occur in just two weeks, and for smoked meat lovers everywhere, let’s hope it’s a triumphant one.

Saturday, February 23rd will be the opening day of John Mueller Meat Co., and the trailer will be set up in the parking lot of Kellee’s at 2500 E. 6th Street. This will put John a stone’s throw from Franklin Barbecue and spitting distance from Live Oak Barbecue in East Austin. 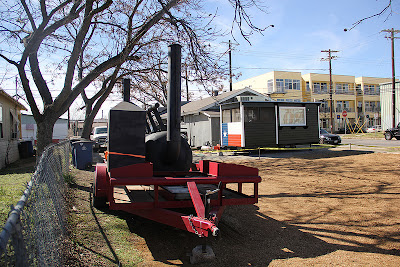 The new trailer will be open Tuesday through Saturday with the same menu that I applauded at John’s old location. Just like his previous set-up you can eat at one of the picnic tables in front of John’s trailer, or you can take your barbecue inside and buy a beer at Kellee’s.

If you’re too impatient to wait two weeks, you can get a preview in Houston where John will be smoking brisket, ribs, and sausage for Q for a Cause from twelve to four at Cottonwood Bar at 3422 N. Shepherd on this Saturday, February 9th. 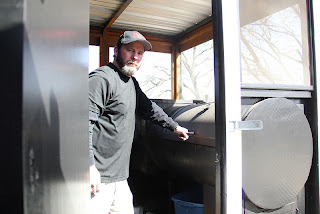 Finally, for all the folks with unfulfilled hope that the Aaron Franklin versus John Mueller barbecue rivalry would blossom, they can now shift their focus to a genuine intra-city family feud. John’s sister LeAnn Mueller (who ousted him from the trailer on South First Street) and (I’m guessing former) friend John Lewis now head up the pits at La Barbecue in John Mueller’s old barbecue trailer. Sparks are gonna fly.