Two weeks ago Cranky Frank’s Barbeque in Fredericksburg finally bit the bullet. They raised their prices for barbecue and posted a sign on the door explaining the change to their customers. Not two days later I received a question over Twitter with a photo of the sign.

@bbqsnob Is this a supply-demand byproduct of the central Texas BBQ renaissance? At Cranky Frank’s, Fredericksburg. pic.twitter.com/UjvtJ7WJgH

Complaining about food costs is a favorite pastime of restaurant owners (and anyone who steps foot into a grocery store), but this time restaurateurs have a legitimate beef: the wholesale cost for beef is at historic highs, and according to the Los Angeles Times, the cattle herds in the U.S. are the lowest they’ve been in 63 years. Factors from corn prices to St. Patricks Day have all been blamed recently, but it really comes down to severe droughts in California and Texas. California ranchers, many of whom sold off their entire herds, are in the same predicament that Texas ranchers were in last year. Rebuilding those herds takes several years, so in the meantime beef supplies have plummeted while demand remains high, which, per the rules of economics 101, raises prices. This is hurting the wallets of beef consumers across the board, but barbecue joint owners are getting hit right in the brisket.

Keith Schmidt has a weekly order for eighty cases of brisket (400 briskets) at Kreuz Market in Lockhart. They use untrimmed Select brisket, one of the most economical cuts of beef you can purchase. A year ago Schmidt paid $2.20 per pound for it; this week’s order was $2.79, and his supplier told him to expect to pay $3.05 next week. That represents a 39-percent increase over just a year, but his price charged to the customer has only gone up a dollar per pound (an eight-percent increase). He’s holding firm for now to ensure that the regular customers stay happy, but admits “if it doesn’t come back down, I’m going to have to go up some more.” By holding his brisket price down, Keith Schmidt is eating a weekly loss of over $1,600 over the same week last year. He just hopes in the meantime he can convince more customers to order his equally famous shoulder clod. Its wholesale price has held steady, and it has far less shrinkage when cooking. As to why the clod isn’t getting more expensive right along with the brisket, Keith adds, “It just doesn’t make sense. The cow still has the same parts.”

But all of the cattle parts are not created equal. According to the USDA, the wholesale cost for bone-in ribeyes is only up about nine percent (roughly $0.50 per pound) over the last year compared to a whopping 52 percent ($1.01 per pound) for brisket. Beef plate short ribs are also spiking (twelve percent over the previous year), meaning the second most popular beef cut at barbecue joints is quickly becoming a money loser. The only two cuts of beef that haven’t gone up over the past year are chuck short ribs and beef back ribs. Both are already popular cuts for smoked beef across the state, but those who are addicted to the more expensive (and meatier) plate short ribs might need to start considering these alternatives.

Killen’s BBQ in Pearland sells their plate short ribs for $18 per pound. That might sound exorbitant, but given the cost of the raw product and the loss of weight during cooking, they should be closer to $30 per pound to be in line with standard restaurant food costs percentages. In response to the rising costs, Killen’s no longer allows a beef rib as an option on their combination plates. You’ve got to buy it by the pound.

You’ll also have to get your barbecue by the pound at Cranky Frank’s Barbeque. Daniel Martin said they’re no longer selling “plates” because buying by the pound allows the customer to determine how much they need to eat. In addition to a $2.00 per pound increase in brisket prices, he is also taking advantage of the more steady cost for beef shoulder clod. “We’re now using it for chopped beef instead of briskets.” Just this morning Martin notified me that his brisket order today cost him $3.19 per pound.

In Tyler, Nick Pencis of Stanley’s Famous Pit Barbecue is paying $3.00 per pound for his briskets, but he hasn’t yet had to resort to alternative proteins. “We’re lucky because we live in a part of Texas that is sandwich-heavy and we have a better margin on them.” The high cost of beef has still forced them to raise prices, but he’s taking his cues from others in the local market. Rudy’s in Tyler just started charging $14 per pound for brisket, so Pencis will match it. Now he just has to pay the graphic designer to revamp the menu with the new prices.

If you think these rising costs at barbecue joints are tough on your finances, let’s examine what you would be paying if proprietors simply raised their prices to match their raw beef expenses. These numbers factor in the significant weight loss of the meat through trimming and cooking. Also in the equation is the industry standard target for food costs in any restaurant which is 34 percent.

These numbers don’t factor in the rub prices either. At Louie Mueller Barbecue in Taylor they pack on the black pepper which comes at a cost of about $1.00 per pound of cooked meat. Wayne Mueller told me if he adjusted his prices to match the escalating cost of the Certified Angus Beef that he uses, one of his famous beef ribs would cost nearly twice the $18.99 price tag that he’s currently charging. He’s not doing much better on brisket. Mueller charted what he’s been paying for brisket to illustrate the problem. For over three years the cost stayed within a pretty tight window. It hadn’t even crested the $2.40 per pound mark until late January of this year. Now he’s paying $3.05. Something has to give. 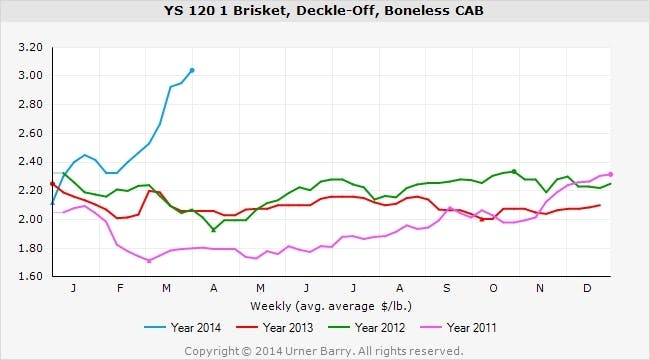 Even with these rising prices, none of the barbecue joint owners I talked with were willing to use lower quality beef to save a buck. A sales rep at US Foods who supplies beef to the Dallas/Fort Worth area echoed that sentiment. In Taylor, Andy O’Brien of O’Brien Meats sells beef wholesale to the likes of Snow’s BBQ and John Mueller Meat Co., but O’Brien said he hasn’t gotten any requests from his customers for cheaper alternatives. He’s just worried what might happen if the high prices stick around for too long. “People are going to feel like they can’t eat barbecue anymore.”

So remember the next time you pay $12.90 per pound for your brisket at Kreuz Market or even $17 at Louie Mueller, there’s no sense in complaining that your barbecue is too expensive. At least for the time being, the customer is getting the good end of the deal.