They’ve been smoking briskets over mesquite since Tony’s The Pit Bar-B-Q opened in 1958. Tony Vargas Sr. started the place, but according to Martha Vargas, it was her husband Tony Vargas Jr. that’s responsible for its most famous menu item – brisket hash.

Mrs. Vargas recited the ingredient list without hesitation when I visited recently. “It’s brisket trimmings, and potatoes. [Tony Jr.] added bell peppers, onions, and the spices. It’s also cumin, garlic, Worcestershire, and the barbecue sauce.” Those brisket trimmings are essentially the fatty burnt ends, but enough customers in these parts want bark-free brisket that those burnt ends pile up in the scrap tray. At Tony’s they grind them up and cook them down in a perforated pan to let the excess fat drip away. It’s like a meatier version of corned beef hash, and it’s cheap. A sandwich with hash is half the price of a chopped brisket sandwich at Tony’s. 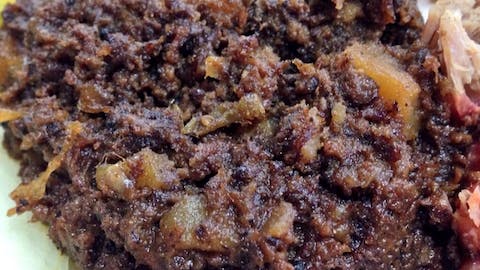 Martha Vargas recommended it in a taco or one of the restaurant’s burritos, but alas I had already enjoyed mine by the forkful. The flavor is intense, like concentrated barbecue, but with the barbecue sauce and bell peppers playing prominent roles. I liked it, but wondered where this tradition might have been born from.

In South Carolina, they have a barbecue hash that is as integral to their barbecue tradition as pinto beans are to Texas. Robert Moss explained its origins in an article for Serious Eats.

Hash originated in the 19th century as a way to use up the heads, the livers, and all the rest of the pig that couldn’t be cooked on a barbecue pit. It was all put in a huge iron pot and boiled for hours over an open wood fire. As it simmered, the cooks would skim out the bones and gristle and other inedible stuff and add onions, potatoes, and spices, then cook them all together into a thick, gravy-like stew.

El Paso is a long way from South Carolina, and so is their version of hash. The same ideas of using leftover meat is there, but it’s hard to make a connection based on anything but the name. I started looking back at old newspapers in El Paso and it didn’t take long to find references to barbecue hash. It was available by the can at McMickle’s market in 1918, and in 1928 there was an ad for a “barbecue hash sandwich” at El Paso Barbecue. Neither mentioned if the hash was made of beef. I found various local ads for a similar sandwich in the 1940’s, and the Vargas’s were likely familiar with them when they opened in the late fifties.

When I left Tony’s, I was giddy because I felt like I’d made a small yet significant barbecue discovery, but the hash at Tony’s already got a bit of the limelight in Texas Monthly’s 2003 Top 50 BBQ issue. Tony’s was named to the honorable mention list because of the hash. When I left Tony’s, my next stop was Johnny’s Pit BBQ where I excitedly ordered the hash burrito from the menu. Sadly, it turned out to be just chopped brisket with a few fried potatoes thrown in. To get the real deal, you’ve got to go to Tony’s.