Brown’s Bar-B-Que has one of the best briskets in Austin, and one of the best side items in Texas. When I visited a year ago (at their previous location) I found the brisket to be the weak link, but no longer. Pitmaster Daniel Brown has found the sweet spot in his trailer mounted steel smoker, and Austin is the beneficiary.

These days the Brown’s trailer is parked out front of Corner Bar on South Lamar. On a Thursday at 1:30 there were a few people in line. A couple from Ohio was back at Brown’s for another meal. They liked their first visit so well that they chose Brown’s as their last meal in Texas before heading home. It was also my last of five meals on the day, so I was hoping to go out on a high note. 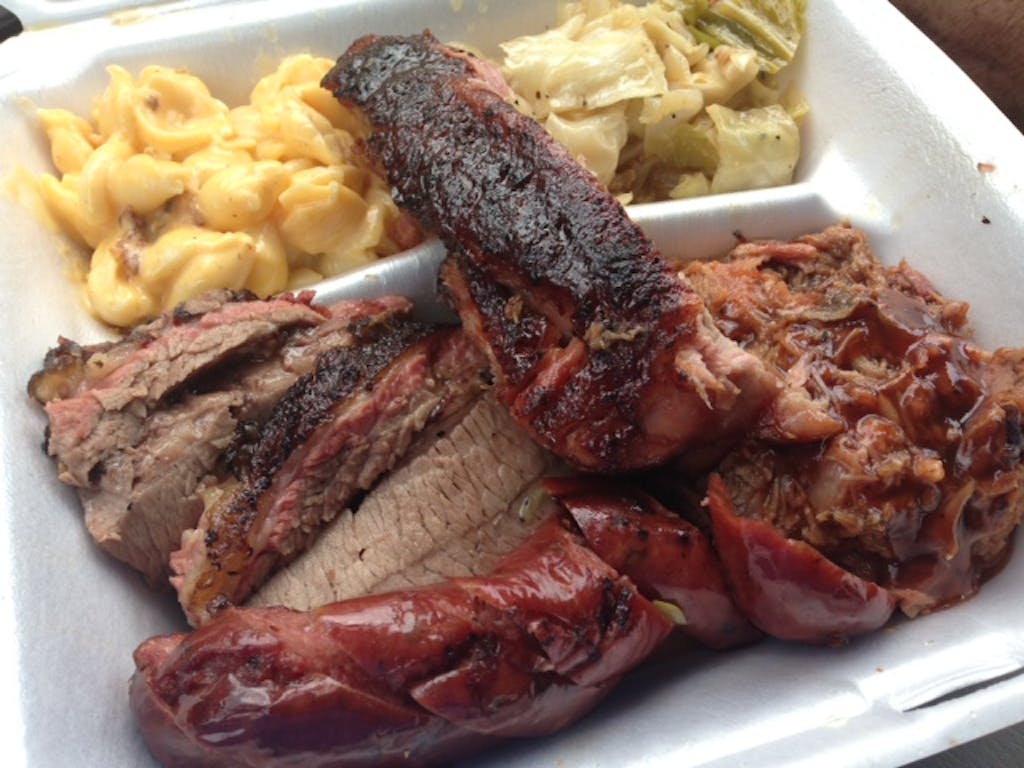 From an earlier visit, I knew the chicken thighs were great. I wanted more of that ruddy, crunchy skin and juicy dark meat, but word has gotten out. Chicken was sold out for the day. Four meats remained, so I got them all. A beef sausage was juicy with a great snap. It comes from Texas Sausage Company in Austin who also supplies Franklin Barbecue. If it’s not the same link recipe, then it’s pretty dang close. The pulled pork here is nothing like Franklin. The meat has lost all structure from stewing in barbecue sauce. It was like biting into over-marinated meat that had turned to mush, and I couldn’t taste much of anything but sauce.

The box of meat was quickly redeemed with my first bite of the juicy pork rib. It was thick with a nice dark bark. The seasoning was simple, but it had a nice sweetness to the glaze which provided a good counterpoint to the bold smokiness. That good smoke carried over to the brisket as well. I got a few thick slices of mostly brisket flat, or lean brisket which can easily dry out. Instead these slices were slick with rendered fat. The salt and pepper crust provided a good texture variation, and a rush of flavor. All taken together, this is brisket that can hang with the big boys of Austin.

Rarely does a side item create an impression as strong as the smoked meats, but the cabbage here is incredible. I’m sure you’d be happy with the well made shells and cheese, but you might as well order double cabbage because you’ll be sad when it’s gone. Stewed cabbage is usually so watery that it might as well be soup, or so slick with grease it barely stays in the fork. At Brown’s the cabbage still has some crunch left. It’s a bit sweet, but more like the sweetness of caramelized onions than scoops of sugar. A bit of bacon crumbled in there is a nice touch, but this dish doesn’t use the bacon like a crutch. This cabbage will make you happy to eat your vegetables, but please don’t skip the brisket.