Chances are you won’t just happen upon Bubba Moses Pit BBQ in Dawson. The tiny town is along State Highway 31 between Corsicana and Waco. Even if you’ve driven that route, a well-timed sneeze might cause you to miss Dawson entirely. If you’re alert, look for the steady mesquite smoke that rises behind a metal building along the north side of the road. That’s where Donnie “Bubba” Moses does his cooking, and there’s nothing in the wood pile but mesquite. 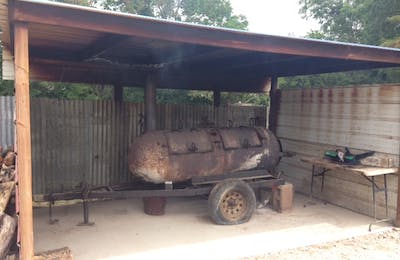 Those that have eaten meat indirectly smoked with mesquite know just how strong a flavor it can impart. Other Texas hardwoods impart a flavor that might be harder to tell apart, but the punch of mesquite is uniquely powerful. For this reason, many that use mesquite choose to burn it down to coals before cooking barbecue with it. In that process, all of the smoke is carried away before meat and fire ever encounter one another. But here at Bubba Moses Pit BBQ the mesquite twang is alive and well on the meats that are heavily smoked in the rusty old cooker out back.

A smoky essence rose from the slices off of a jet-black brisket. The meat was so tender it was hard to grasp a good mouthful before it crumbled through my fingers, but the first bite from the edge was moist and flavorful. It was well seasoned with salt and black pepper, but forever in the foreground was that smoke. It was almost uncomfortable on the back of the throat, like I’d just inadvertently inhaled, but I kept going back for bite after smoky bite. 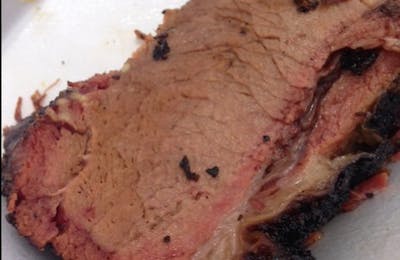 Thick, meaty ribs were harder to tangle with. Their hide was tough and leathery, and the dry-ish pork beneath wasn’t much of a reward for breaking through. Both the smoke and seasoning were muted compared to that powerful brisket. A few slices of Elgin sausage (which came recommended when I ordered the three-meat plate) were just warmed through without much of any flavor contribution from the smoker. 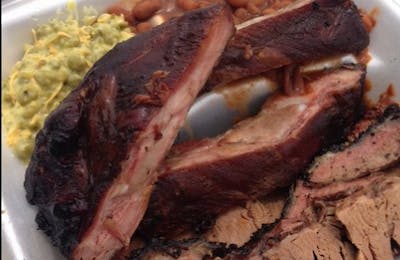 A side of spicy ranch beans provided a good companion to the smoky brisket, and I was hoping that the pea salad would be a nice change of pace. I try to get some greenery whenever I can while on the barbecue trail, and there aren’t many better green options than pea salad. That is unless the cook started with canned peas instead of either fresh or frozen. The textural pop of each pea is lost immediately with drab, mushy canned peas. There’s really no saving it no matter how much dressing you add to the mix.

Bubba Moses Pit BBQ is one of those joints I would have counted as a real find had I just happened upon it, but I must credit the Corsicana Chamber of Commerce for sending along their recommendation. It’s the sort of joint that’s worth the twenty-five minute drive from Corsicana for some of that brisket, but there’s no need to go much further out of your way.