The original Buzzie’s burned down, so a newer building clad in stone and sitting off the main drag houses it now. The classic ordering process at the counter went smoothly and I was able to point directly to the crusty slices of beef that I preferred. As I waited I spotted a notice that trimmed lean brisket would be $3 per pound extra. This was my kind of place. 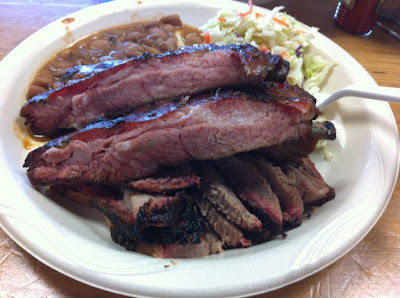 The plate presented was heaped with thick spare ribs with bark the color of a well-oiled saddle. Hidden beneath was a smaller stack of sliced beef which had a slight chew to it, but the flavor was impressively smoky and well seasoned. The end of a spare rib has two meaty sides separated by a line of thick fat that runs from the cartilage out to the edge. When I see a rib like the rib that was in front of me, I like to start by pulling off the top end, which I call the knuckle. If it comes off easily, I know the rib is well cooked. If it’s a well-smoked rib, then I know this will be the best bite. This was a damn fine knuckle of pork rib meat, and the rest of the bone wasn’t bad either. The slaw was pleasantly crisp and the pinto beans nicely seasoned. 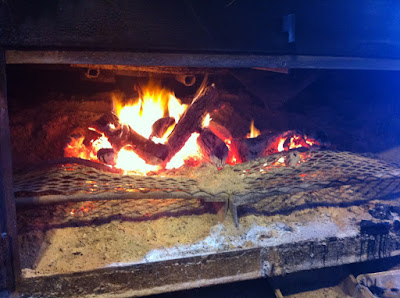 An employee working the pits named Mark showed us back to the pit room. The heat even in January was nearly unbearable as the live oak and mesquite fire raged at the base of the giant steel smoker. Ribs were placed closer to the center of the grates above, directly over the fire, giving them a distinct flavor of the coals. After seeing the pit room we needed to get on our way, but Mark likes to chat. He was friendly and gave plenty of odd information about the crazy characters in this part of the state, but I finally got a word in and we were back on the road hoping to find more meat of similar quality.