There’s a new beef rib in town. Carnal has found a temporary home in Austin, the epicenter of the Texas barbecue boom, while their spot back home, Brooklyn’s Smorgasburg, is closed for the winter. James Zamory and Aaron Saurer, the duo that make up Carnal, draw inspiration from Texas’s smoked meats, but they don’t cook barbecue, nor do they claim to. Instead, they serve a focused menu of large meat cuts cooked in their own fat, so they wanted to spend some time in Texas soaking up the barbecue culture.

Carnal’s first service was from the kitchen of Parlor and Yard was last week. Zamory and Saurer were fresh off a long road trip in a 1995 Toyota Camry with 220,000 miles. “My friends would laugh if they knew I was still driving my high school car,” Zamory joked, but it got them to Texas. Both have experience in Manhattan fine dining. Saurer was a sous chef at the recently closed Betony, and if you tasted the famous chicken for two at NoMad before Zamory left to open Carnal, chances are he prepared it.

It was a hit from the start. “The first day we sold 214 short ribs and nobody knew who the hell we were,” Zamory recalled. Their beef short rib, familiar to any Texan, was cooked slowly in its own fat. More specifically, in beef marrow fat. The rendering itself is a massive undertaking. “A hundred pounds of marrow bones yields eight to twelve quarts of perfectly crystal clear marrow fat,” Zamory explained. The fat is smoked after it’s rendered down, then steeped with herbs and seasonings. They also cook lamb in its own fat spiked with merguez sausage, and pork in pork fat reddened by the addition of ‘nduja, a spreadable spicy salami. The large cuts—whole beef rib racks, lamb breasts, and thick cut pork steaks—stay in the warm fat bath for one to two days. The finishing touch is about fifteen minutes of direct heat over a charcoal fire just before serving. 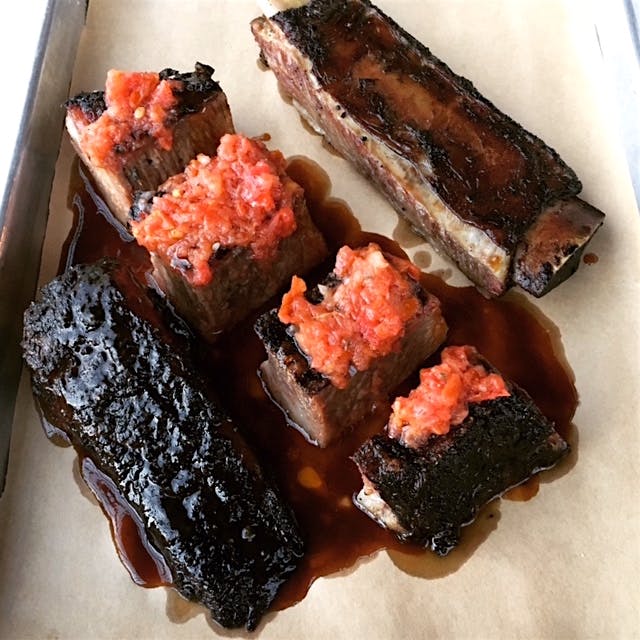 Cooking confit is nothing new for things like duck legs, but Carnal is doing it with cuts usually reserved for the smoker in Texas. It’s not a process I expect to see many barbecue joints switch over to, but pitmasters could take a cue from these Brooklyn boys when it comes to garnishes and sauces. Instead of a side of heavy barbecue sauce, the tender lamb breast ($16) was covered with a garnish of mustard greens, pickled mustard seeds, pistachios, garlic, and lime zest. It helped cut the fattiness, and lent a brightness to a heavy meat, which was far less gamey than I anticipated. The beef rib ($19) was cubed and topped with a relish of tomato, shallots, lemon, marjoram, and black pepper along with a beef jus. It provided a freshness to the dish that you won’t get from a molasses-laden sauce.

There’s plenty of fat in a beef rib, and in traditional smoking much of it gets rendered out. With this confit method, all the fat remains in the cut. The result looks chewy and undercooked, but isn’t in the least. That also makes it one of the richest beef ribs I’ve had, so the bright relish was even more welcome. 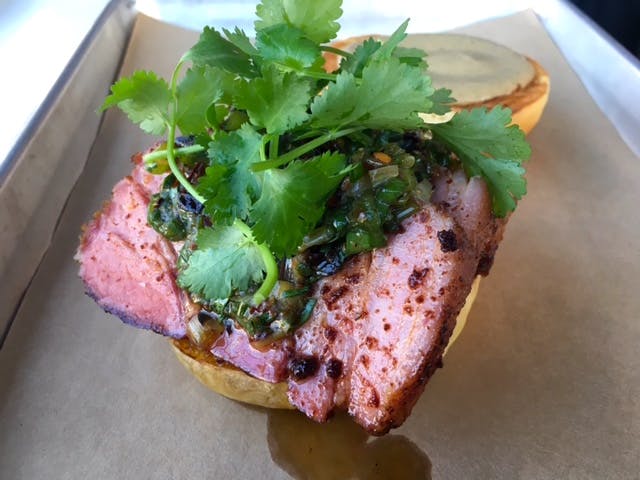 Sprigs of cilantro topped a sandwich of sliced pork shoulder ($13). The fatty slices, stacked like fallen dominoes, were as delicate as a barely cooked scallop. Charred and raw scallions formed the base of the sauce along with coriander, chiles, and white balsamic vinegar, and more cilantro. I was there with a friend, and sadly we were forced to share it. I loved the soft texture, but it was also easy to imagine the rugged slices of a Snow’s pork steak with the same biting relish. Onions and cilantro together aren’t exactly groundbreaking in Texas, but rarely seen together at barbecue joints. The sides are just as inventive. Roasted cauliflower with mint and horseradish were almost as good as the spicy potatoes. The humble diced potatoes look simple enough, but they’ve got a garlic punch and are in a pool of sauce made with fried eggs. 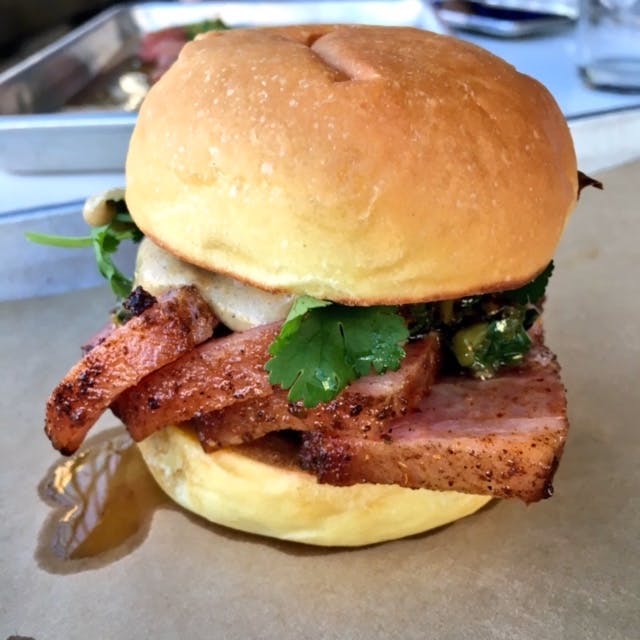 There’s also a thick burger made with ground short rib on a bed of grilled romaine and topped with sliced onion, an onion sauce, and charred onion powder. It’d be my fourth choice out of the four meat entrees on the menu, but it’s a great burger. The menu will evolve as they play with new cuts. I put in a good word for confit beef cheeks. (Stay tuned to their Facebook page for updates.) And Zamory hinted that epazote and huitlacoche might be flavors coming to the menu soon. 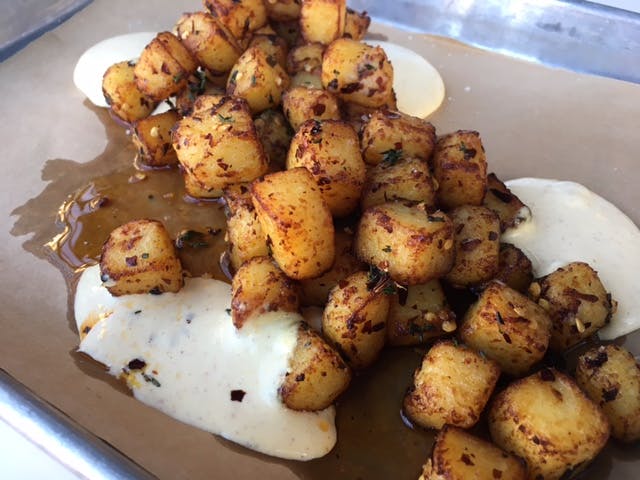 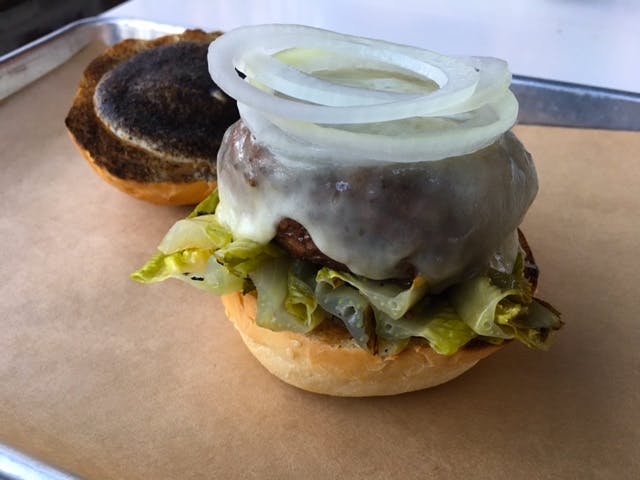 Carnal hopes to be in Austin through March, before returning to Smorgasburg, which reopens on April 1. Zamory and Saurer are a two-man team right now, and they’re looking for help from folks who might be curious about cooking large hunks of meat in gallons of liquid fat. Although pitmasters might not think they can learn much from a couple Brooklyn guys who don’t cook barbecue. I promise you can, especially when it comes to building sauces laced with citrus, spice, and herbs that truly enhance the meat. Now, I can’t wait to try a chopped beef sandwich with a mustard green relish.