Two trips in two years, and it was pouring down rain both times. I guess the sun shines in Lillian, I just haven’t seen it. It’s not like you pass through a place like Lillian. With Cedar Hill State Park to the east and nothing to the west, it’s not easily accessible, but BBQ from Casstevens can make the trip worth your while.

Friday is rib day, so on a Saturday morning, I was surprised to find ribs available. They were most definitely from the night before, and I got the last remaining half rack. The rack had a rich black crust, and the meat had developed a deep smokiness evident in every chunk of meat that fell from the bone. And fall it did. After such long storage, the texture of this well seasoned meat was a bit mealy, but I knew what I was getting into when I ordered it. 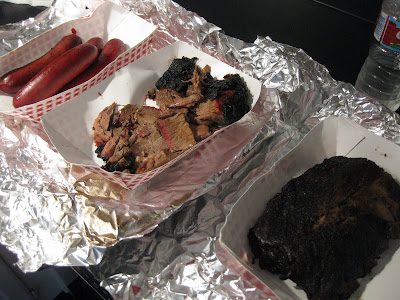 Brisket was a mixture of sliced, pulled, and chunked portions of the meat. It had a great smoke ring beneath bits of thick black crust. The meat was tender and very moist from the well-rendered fat. A robust smoky flavor from the hickory smoke was a welcome addition to the salty rub. The hot link wasn’t particularly notable, but it was a good peppery version with plenty of heat. Overall, the meats all had great flavor, and I’m sure the ribs would have been nearly perfect if they were fresh. It may not be on the way to anywhere, but I’ll find a reason to make a pit stop in Lillian for more of this great ‘cue.