If it weren’t for the big, red sign that reads “BBQ” out along FM 1970, I’d probably have passed Chuck’s Smoke House. It’s a few miles southwest of Carthage in East Texas, near the shores of Lake Murvaul. A metal bull mounted to the roof and hand painted lettering on the sign makes this look like a classic, rural Texas barbecue joint, but it’s only been around for six months. That’s when owner Chuck Terrell decided to jump head first into a business he wasn’t quite prepared for.

Terrell’s family needed him to come back to East Texas, so he left a job selling medical equipment in Dallas. He wasn’t sure how to use those skills in Carthage, so he looked around for another career. The family owned a long-abandoned bait shop near the lake, and Terrell thought a restaurant would work well there. I assumed he chose barbecue because of some long simmering love affair with his backyard smoker, but I was wrong. “I had never really cooked barbecue before I decided to open here. I watched every one of Aaron Franklin’s YouTube videos to learn how to do this,” he told me as we walked toward a trailer-mounted smoker. Terrell quickly outgrew two smaller offsets and had borrowed this one from a friend. It stays on the trailer so he can take it home every night because there’d be nothing worse than a friend’s pit getting stolen on your watch.

Inside, a huge chalkboard menu covers the wall next to the register. The usual suspects are there along with a half dozen sandwich creations. Being so close to the border, there’s also some smoked boudin to be had. The Susie Q sandwich is denoted as the best seller, so I added one to my order. A hefty roll held a trio of chopped meats. Brisket, smoked boudin, and a cheap commercial sausage were fused together into a generously proportioned sandwich. The sausage, with a flavor dominated by fat and salt, is hard to enjoy on its own, but worked well as a sandwich binder.

The sliced brisket could have used some of that additional moisture. Instead of getting a proper resting time, it was sliced immediately after being taken off the pit. The moisture quickly evaporated out of the steaming hot beef, and all that was left were dry slices of brisket. Smoky strands of pulled pork were better, but the smoked boudin stole the show. The casing had crisped in the smoker, and the links had just a bit of heat. The boudin was great as a supporting character in the Susie Q sandwich, but it’s comfortable in the leading role too. 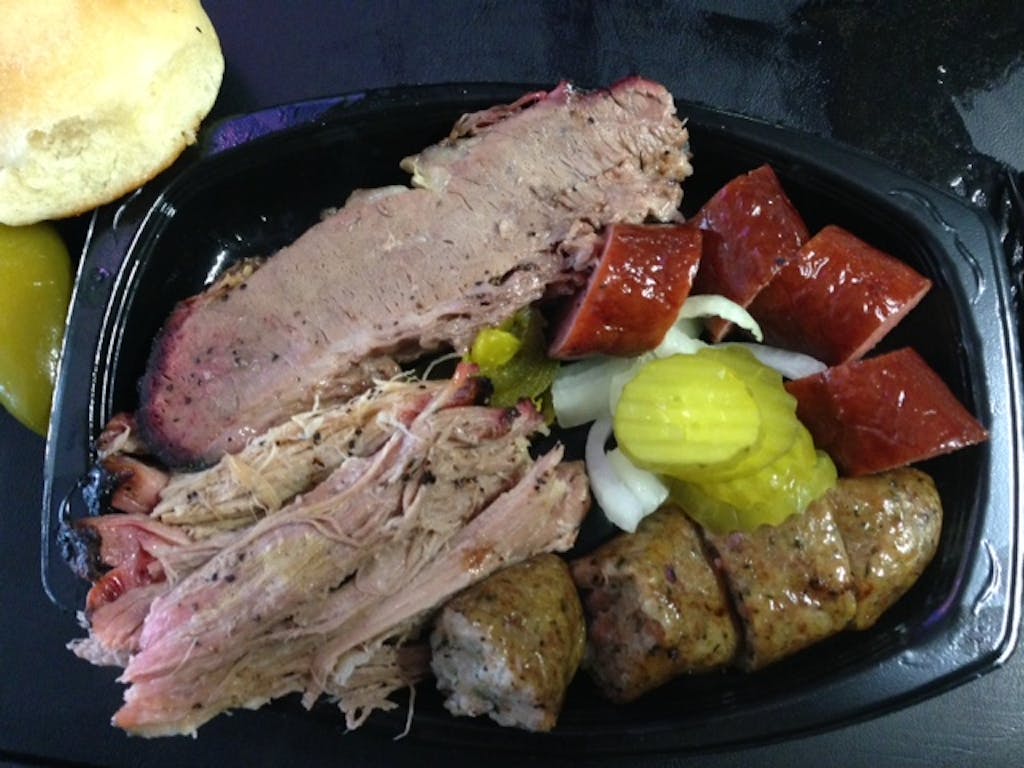 A few spare ribs had great smoke and a bold seasoning. They were dried out on one end and a bit firm. They might benefit from a longer, gentler heat. Terrell asked about that first plate of brisket, and I pointed out how dry it was. He immediately brought a thick slice of fatty brisket for comparison. The marbling made it more tender, but it was still cut way too hot and the surface dried out before it even made it to the table. When I talked to Chuck about resting the meat, he seemed excited about this or any nugget of barbecue advice. He might be a newbie, but he only wants to get better.

Terrell might be new to barbecue, but he’s an adept baker. I could smell the homemade apple cobbler when I first walked in the door, and it was a great dose of sweetness to end the meal. The apples still had some texture left and the  crust was crisp.

Chuck Terrell has a ways to go to make truly great barbecue, but if he started from zero just six months ago, the trajectory is looking promising. He is driven to keep improving and isn’t afraid of constructive criticism. With that humble attitude, he also doesn’t take himself too seriously. The tagline on Terrell’s business cards reads “Best BBQ on Lake Murvaul.” That’s hard to argue.