Rio Grande do Sul is the Texas of South America. Or at least that’s how Evandro Caregnato describes the Brazilian state. And he should know. He grew up there, and it’s where he lived when the founders of Texas de Brazil restaurant asked him to move here in 1998 to help them open a churrascaria, or Brazilian-style barbecue restaurant. In the intervening years, Caregnato has become the culinary director for the forty-plus locations they’ve opened since.

“I feel very at home here in Texas,” he told me at the company’s new headquarters along I-35 in Dallas. “The way people talk so proud about Texas, they do the same thing in Rio Grande do Sul.” Residents think it’s the greatest state in South America, not just in Brazil, and many long for the days when it was a republic. Sound familiar? Well, they also think they make the best barbecue. They just call it churrasco, which is the subject of Caregnato’s new book Churrasco: Grilling the Brazilian Way.

The book is a collection of recipes from Texas de Brazil along with many from Caregnato’s upbringing that aren’t on the restaurant’s menu. For example, he included a recipe for grilled chicken hearts, something he doesn’t serve at Texas de Brazil, but is a favorite dish of gauchos, the cowboys of Rio Grande do Sul. The small chunks of meat cook quickly, so they’re often eaten as a sort of pitmaster’s treat while other meats cook.

I took a shot at the recipe in the book which requires a thirty minute vinegar soak, as well as two hours luxuriating in a red wine marinade. After grilling them over charcoal, I can see why they’re so popular. Each bite-sized piece was pleasantly acidic from the marinade, and not at all chewy.

“For a gaucho, churrasco is meat on a skewer cooked over an open flame,” explains Caregnato. That’s the basic definition. But just like with Texas barbecue, the proper way to cook it leads to endless arguments. “The way they start the fire, the way they skewer the meat,” is all up for debate. Even when to add the salt is cause for argument. Caregnato continues: “Some gauchos cook the meat for a little bit, then they salt it, while others salt the meat right before grilling.”

It seems no matter the country, everybody has their own “correct” way to cook barbecue, but the Brazilians agree on one thing: like brisket in Texas, picanha is the king of churrasco. This beef cut from the top sirloin (sometimes called the culotte) isn’t easy to find (the IMPS number is 184D). It’s triangular, so don’t confuse it with the trip-tip which Caregnato calls “the poor cousin of the picanha” in the book. You also want to make sure the picanha has the fat cap intact. That’s what makes the cut special.

The cookbook includes a few ways of preparing picanha, but the most common is the how they serve it in the restaurant, rolled into a C-shape and placed on a skewer. If you’re familiar with the process for cooking top block sirloin in Santa Maria, California, this is like a miniature version. Instead of a massive hunk of sirloin, these chunks end up being a pound or so on their own. Caregnato’s recipe calls for a three pound picanha (before trimming and separating), but all I could find were cuts half that size.

As I said, picanha is hard to find in Texas grocery stores, but Central Market just started carrying it for $10.99 per pound. The fat caps were less than perfect, and the size was a little small, but I grabbed a couple to try the recipe. After building a charcoal fire, it couldn’t be simpler. The recipe is just beef and salt. Not just any salt, though. The gauchos prefer the large crystals of sal grosso, and that’s what Texas de Brazil used when it opened. Caregnato writes that “many guests complained about its texture, and we had to give assurances that the crystals on their plate were not tiny pieces of glass.” As a result, they switched to Diamond Crystal Kosher salt. I’d never tried sal grosso, but Caregnato gifted me with a bag to use for my cook. As you can see below, the crystals are significantly larger than even kosher salt.

Back home, I fired up some charcoal and loaded the thick slices of picanha onto a rotisserie skewer. A note on the charcoal: they only use hardwood lump charcoal at Texas de Brazil, and it’s sourced from South America. They tried using mesquite charcoal, but as explained in the book,  “it created too many sparks…that stuck to the meat, making it look like the meat was covered in black pepper.” At the restaurant they season and cook just the outer layer which is served tableside, then the skewer of meat is brought back to the grill for re-seasoning and to cook the newly exposed layer of meat. My plan was to cook the entire cut to medium rare, which took just twenty minutes.

As a lover of trip-tip, I now have a new favorite mid-priced beef cut for the grill. The picanha was juicy and plenty salty (go easy on the sal grosso since it doesn’t dissolve entirely), but Caregnato says that’s the Brazilian way. “I’m going to be fired one of these days for loving too much salt,” he joked. Most importantly the picanha was incredibly tender. And because of the fat cap and the high heat, there were crunchy bits of fat in every slice.

I then tried another method of grilling the picanha taught to me by my friend André de Luca in Sao Paulo, Brazil. This involves searing the entire picanha, cutting it into strips, then grilling those. This doesn’t involve a skewer, so doesn’t meet Caregnato’s definition of churrasco, but it was nearly as good and requires less equipment. 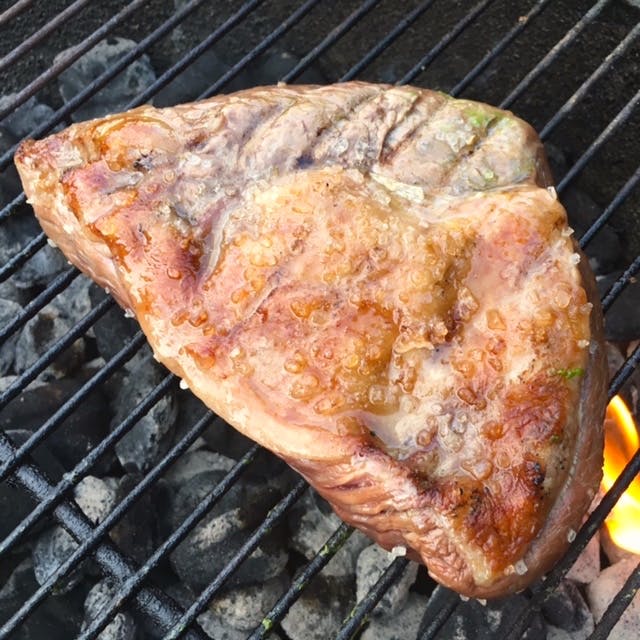 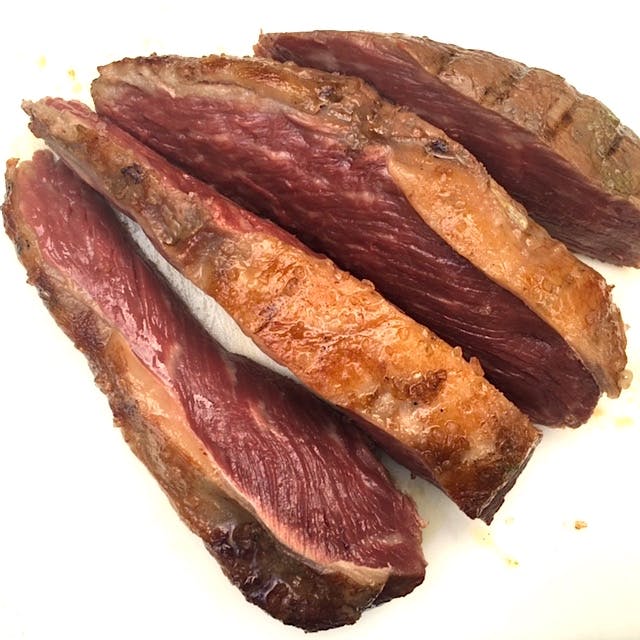 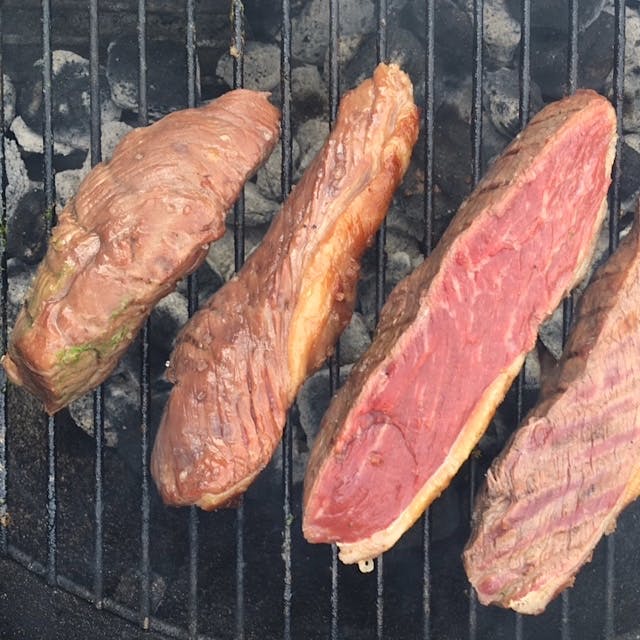 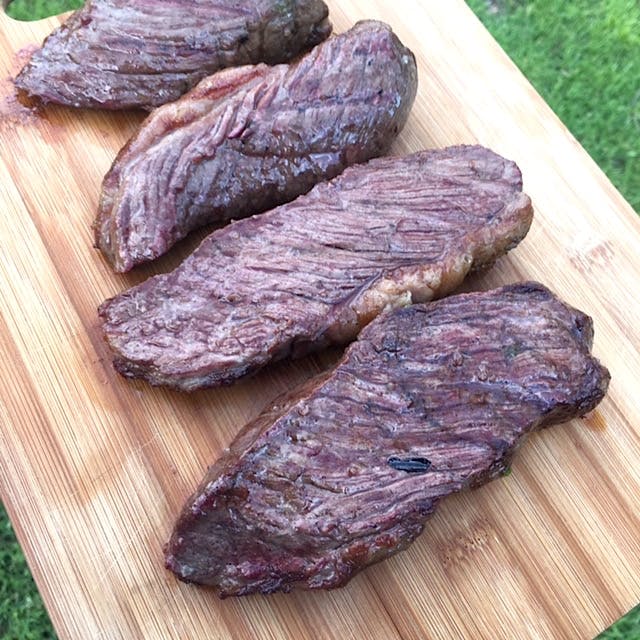 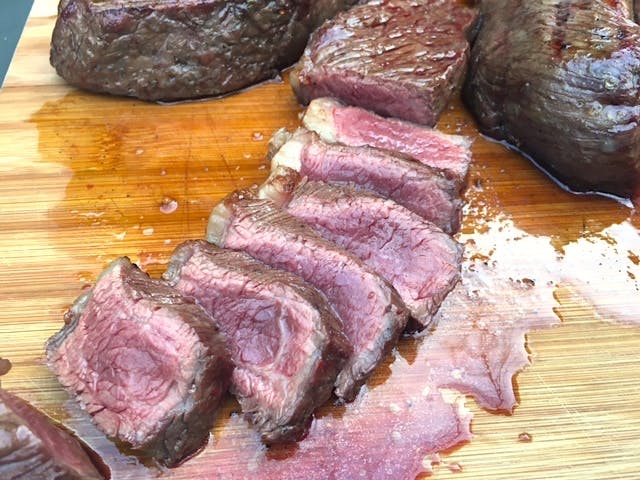 The photos in Caregnato’s book were taken by Denny Culbert. He’s a friend of mine, and while he was on location in Texas, he described the enormous grills and cuts of meat used over the two days that he shot all the photos. He got to taste all of it, and raved most about the beef plate short ribs. This is a cut familiar to any Texas barbecue fan, but the preparation is a bit different. First, the only seasoning is salt, and it’s only seasoned on the top of the rack. The recipe in the book calls for them to be done in the oven, starting with high heat, then finishing them off at 275.

I wanted to try this higher heat version at home, but started the rack of ribs off in a hot smoker for about an hour before transferring it to the oven, uncovered in a roasting pan. The whole process took just three hours. The result wasn’t like the short ribs at Texas barbecue joints that are so tender they can be pulled apart with your fingers. These ribs were meant to be cut off the bone and sliced against the grain. 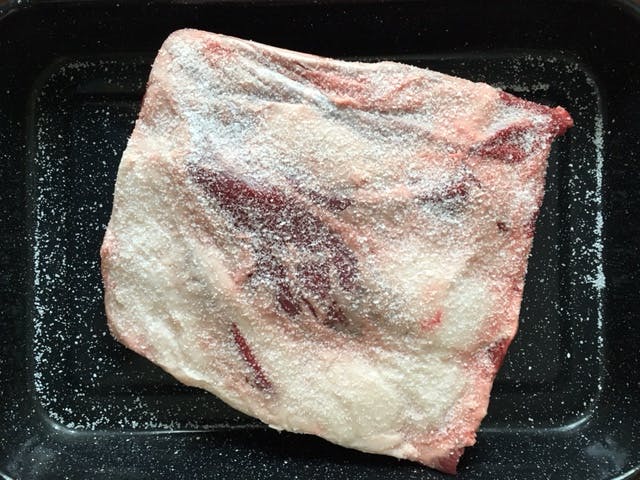 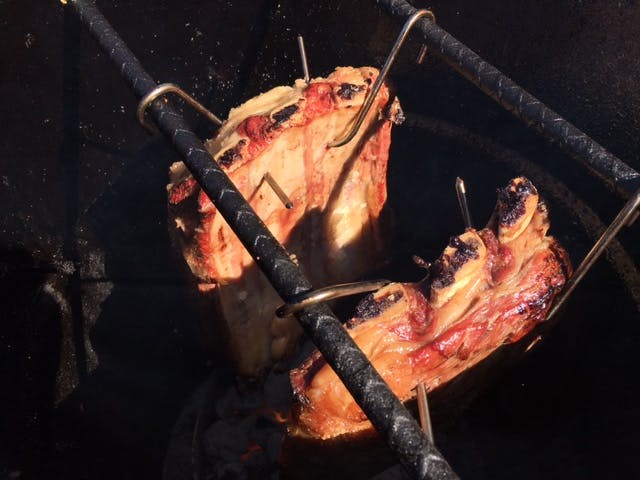 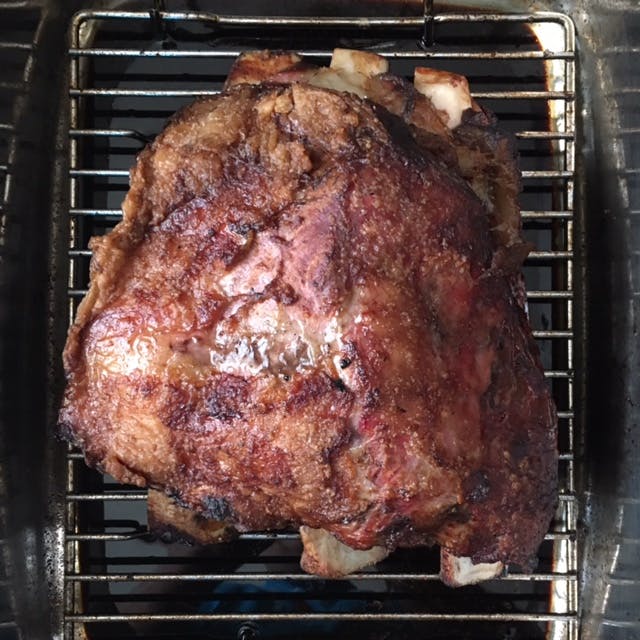 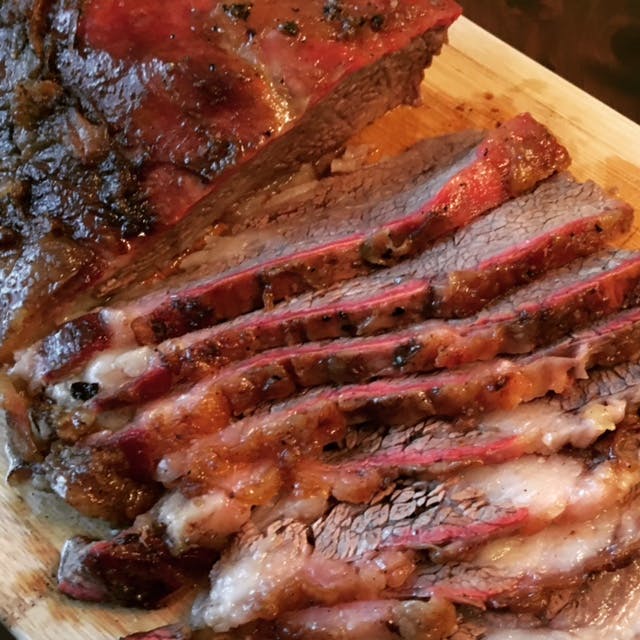 They ate more like a sliced steak, although richer and fattier than most steaks. Caregnato reminds readers in the book that seeking out an expensive Prime or Choice cut of plate ribs is senseless since even the Select grade will have plenty of fat. This quicker cooking method also meant that it remained a bit chewy, but not unpleasantly so.

After talking with Caregnato, I learned that the coveted beef ribs are served only at dinner, and they’re cooked in an oven at the restaurant. That’s a change that was made after several racks of ribs hanging over the open fire in their location in Miami burst into flames on a Saturday with a restaurant full of people. They all had to be evacuated, leaving their unpaid bills behind. That was the last time beef ribs were grilled over the fire. But everything else is cooked that way. Which came as a surprise to me. I just assumed a high-volume chain like Texas de Brazil would have long ago gone to gas cooking. Thankfully that’s not the case. Caregnato has kept them on the path of true churrasco, and now he’s trying to teach the rest of us how to do it. All you’ve got to do is find some picanha.