If I had it my way, City Market in Schulenburg would have a warning sign on their barbecue menu: “Pit in use only on Saturday, microwaves the rest of the week.” You see, first and foremost this is a meat market. Making sausage (including weiners) is their biggest business, on the order of five tons per week. Barbecue is secondary, except on Saturday.

It had been almost three years since my last visit, which was thankfully on a Saturday. The barbecue then was excellent, and my review was positive. Since then I’ve gotten plenty of feedback both positive and negative from other visitors. The strongest opinion came on a Monday:

Schulenburg City Market had the worst #BBQ, but kolaches across the street were great. Prause in La Grange was a surprise w/ best brisket.

The tweeter confirmed that the meat had come via the microwave. He had ordered his barbecue inside the meat market, and never glimpsed the pits.

Last week I stopped in at City Market – again on a Saturday – during a road trip between Houston and San Antonio. Pat was working the brick pits through the side door in a dark room full of the smells of roasting meat and oak smoke. All the meats were taken fresh from the pit and cut on the block by Pat. It was a great meal, and I said so via Twitter. Ten months later, the wound was still fresh:

@BBQsnob Last trip to City Market in Schulenburg they put my meat in the microwave. I’ll never forgive. Kolaches across street were better.

That is precisely why my proposed warning sign would be beneficial. Barbecue grudges die hard with some, and bad microwaved meat is hard to forget. Lucky for me, my visit last week wasn’t on a microwave day. Pat confirmed that they smoke everything for the week on Saturday morning. If you want fresh barbecue there you’ve got to come in between 8:00 and 2:00. Make your travel plans accordingly. Another reason to stop in then is to get a taste of their 50/50 pork and beef sausage (the links in the case are 80/20 pork to beef) which is only served at the market on Saturday. It was juicy, garlicky, and delicious. So was the rest of it.

A rub of black pepper, salt, paprika, and cayenne is used for everything. Pork ribs were coated heavily and were good and smoky. The meat was tender and moist and came away from the bone nicely. Pork steaks were also available, and their flavor rivals that of Snow’s. Again, the pepper was heavy, but less dominant than on the ribs. Brisket had the same great flavors, but the meat was still tough and the fat poorly rendered. A better option, and preferred by Pat, was the smoked sirloin. A tender cut already, it doesn’t need the extremely long cooking time of brisket, and the meat was still plenty juicy. You can also get chicken and turkey breast, but I saved those for a return visit – on a Saturday.

I say all of this with the knowledge of the other secret here at the City Market in Schulenburg. Beyond the pit room through the double doors is a clean room where the sausage is made, and beyond that is another room with a gas-fired rotisserie pit that also burns oak. It’s an industrial model with a brand name that I couldn’t find, and was built into the wall. Another man was scrubbing every inch of it since its work for the week was done. Those twin bricks pits in the cutting room out front are used only for the last few hours of smoking for the briskets, and serve only as warmers for the rest of the meats. I would have felt duped if I hadn’t been so full of good barbecue. 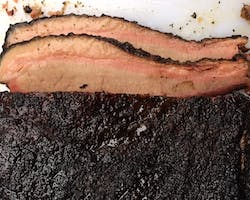 The Many Briskets of Texas 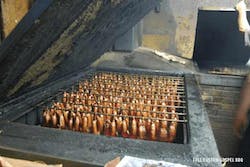